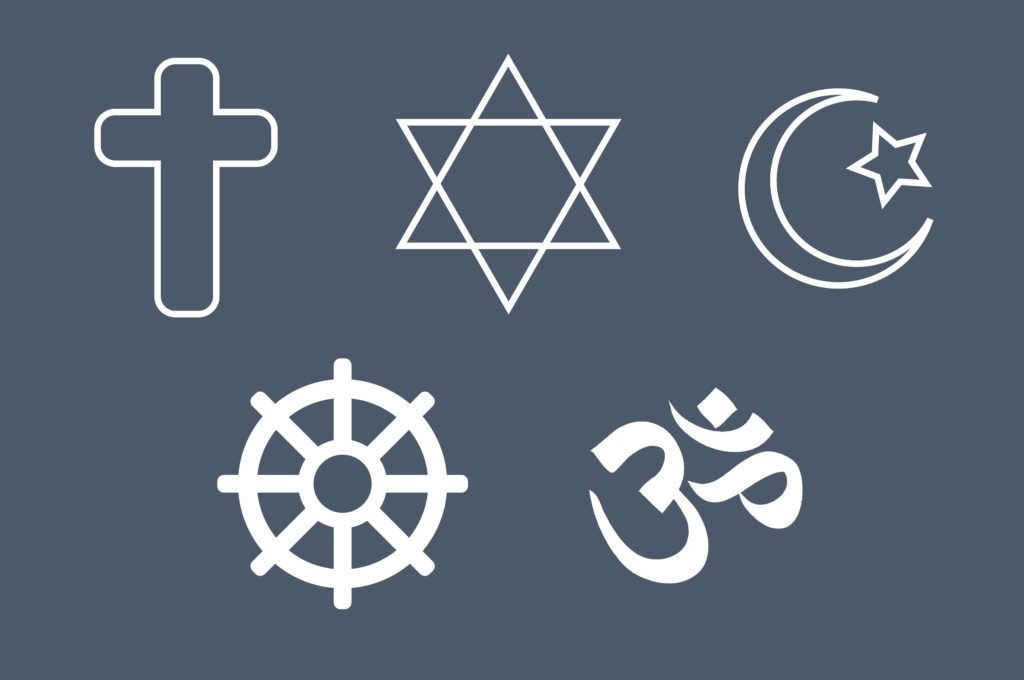 Students at duPont Manual High School come from many different walks of life. A wide variety of people bring with them a wide variety of beliefs and traditions, and those traditions all mean something different to every individual who observes them. Faith has a major influence on a lot of the students at duPont Manual High School, and each of them expresses their beliefs in unique ways.
Hinduism
Amulya Ankem (12, HSU) also finds confidence and stability in her faith. Every day, Ankem wears a necklace of Hanuman, a prominent figure in Hinduism.

“My dad and I both wear a Hanuman pendant, which is meant to increase luck or courage and self-confidence,” Ankem said. “Hanuman is such a big deal in Hinduism. Lord Hanuman symbolically stands for both Bhakti (devotion) and Shakti (power).”

Ankem says that her faith has a noticeable, but not overwhelming role in her life as a student.

“There are no restrictions to what I can learn, and I don’t have to step out to pray to meet a requirement,” Ankem said. “Of course, some major holidays I can’t go to the temple without missing work from school, regardless of an excused absence.”

Unlike Tucker, Ankem doesn’t discuss her religion with her classmates very often. Generally, she does not talk about it unless one of her classmates asks her a question or a class discussion involves ideas that link back to her faith. When she does discuss religion, however, she finds that people usually respect her and her beliefs.

“And if they don’t, I understand,” Ankem said. “As a religion with deep roots and never ending gods, it can be confusing.”

Protestant Christianity
Some students feel an unbreakable connection to their faith. “God is everything in my life,” said Sydney Tucker (12, J&C), who is a nondenominational Christian. “Without him, I’m nothing.”

Tucker believes that everything is part of God’s will, and she sees God in every part of her life.

“I put my feet on the ground, I woke up this morning. That’s a blessing,” Tucker said.

Thanks to her faith, Tucker has been able to find a sense of stability as she goes through the stress that comes with being a senior. She says that she worries too much, and that to her, the most important phrase in the Bible is “fear not.”

“God knew that we were gonna be afraid, it’s our natural instinct, like ‘oh my goodness,’ like ‘I don’t know what’s happening,’ but it’s all part of God’s plan,” Tucker said.

At school, Tucker often discusses her faith with other students. Her beliefs will often come into conflict with the beliefs of others, but she doesn’t let those confrontations affect her resolve. She finds a lot of strength and stability in her faith, which helps her to feel like she can take face any challenge with confidence.

Roman Catholic Christianity
Ella Henderson (10, VA) is Catholic, and attended Catholic schools from first to eighth grade. Though now she’s less involved, she still does volunteer work with the church from time to time.

While Henderson does not agree with the Roman Catholic Church on all of its teachings, she thinks that its core values are good virtues for people to hold.

“The overall message of Catholicism is just to be kind to others, and to love others as yourself, and personally I do agree with that,” Henderson said.

Henderson places a lot of value in both the spiritual and cultural aspects of Catholicism. She said that she takes a “strong middle ground” when it comes whether or not faith or tradition impacted her more.

“I do focus a fair amount on the tradition and culture, but I also find comfort in my faith,” Henderson said.

While she is “pretty passive”  when it comes to discussing religion, Henderson’s faith helps her find strength in a more introspective way.

“I’m a very anxious person,” Henderson said. “Things like death and stuff scare me, and I take comfort in the fact that my faith believes in an afterlife.”
Judaism
Miriam Shir (12, J&C) is an active part of Louisville’s Reform Jewish community. She is involved in many activities in her “schul” (the Yiddish word for synagogue), including playing the ukulele during songs and leading Hanukkah prayers. Shir, however, does not believe in God at all.

To Shir, her religion is not about the faith, but the community and culture that comes with it.

“I love being a part of services, I love the community, and the Jewish community is really friendly and it’s really small,” said Shir. “I probably know almost all of the Jews in Louisville. I love that, because it feels like a family.”

Shir loves to discuss religion with her classmates at school, and she attributes this attitude to the environment she was raised in. Her mother is Jewish, while her father is a Christian-turned-atheist. Because of this, Shir said that she was always open to learning about different cultures and traditions.

That friendliness was not lost on her. Even if she does not prescribe to the message of the Torah, she thinks that being a part of the Jewish community has made her a better person.

“I think that being a Jew has taught me to be a more open person, so in that way I feel I can be a lot more accepting of different ideas and different opinions, and not judge too harshly,” Shir said.

Islam
Amal Hassan (12, J&C) is a practicing Muslim, and a secretary for the Muslim Student Association. For Hassan, faith is a huge part of her daily life.

“It has a lot of impact because I choose to pray every day,” Hassan said. “Most of it’s just a way of life, like maintaining modesty, being a decent person.”

Hassan has a strong connection to the spiritual aspect of her faith. She feels this connection especially strongly during Ramadan, which is a spiritual month of fasting for Muslims.

“I can connect to God at any time through ‘dua’ [supplication],” she said.

Supplication is not the same as prayer. In Islam, prayer is a specific ritual that is performed five times a day, facing Mecca. Prayers must be said in Arabic. A supplication, on the other hand, is a more intimate conversation with God, and can be in any language.

Hassan does not talk about religion much in school, but finds that people will often ask her questions about her faith, especially in regards to the hijab.

“Since there aren’t many hijabis (women who wear hijab) that go to Manual, they don’t know and ask me,” Hassan said.

Some people think the hijab is a tool of oppression, but Hassan said that this is not true. She said that hijab is a form of modesty that both men and women are supposed to observe.

“I started wearing it because I thought it was beautiful,” Hassan said. “I told my mom, ‘I wanna be beautiful like you.’”

Worse than the misconceptions surrounding the hijab, however, are the arguments that Islam promotes violence and terrorism.

“It makes me real sad that that’s what people associate the religion with, because a lot of people that live in Muslim countries are affected by violence and a lot of them are dying, but no one says anything about it.”

Still, despite all the struggles facing Muslims around the world, Hassan is able to find strength in her faith.

“I know that I am not alone,” Hassan said. “Sometimes one can have an existential crisis, you know, and I feel like my life has a purpose. My faith has helped me in times of hardship.”