Manual students on the fence about Trump’s border-focused week 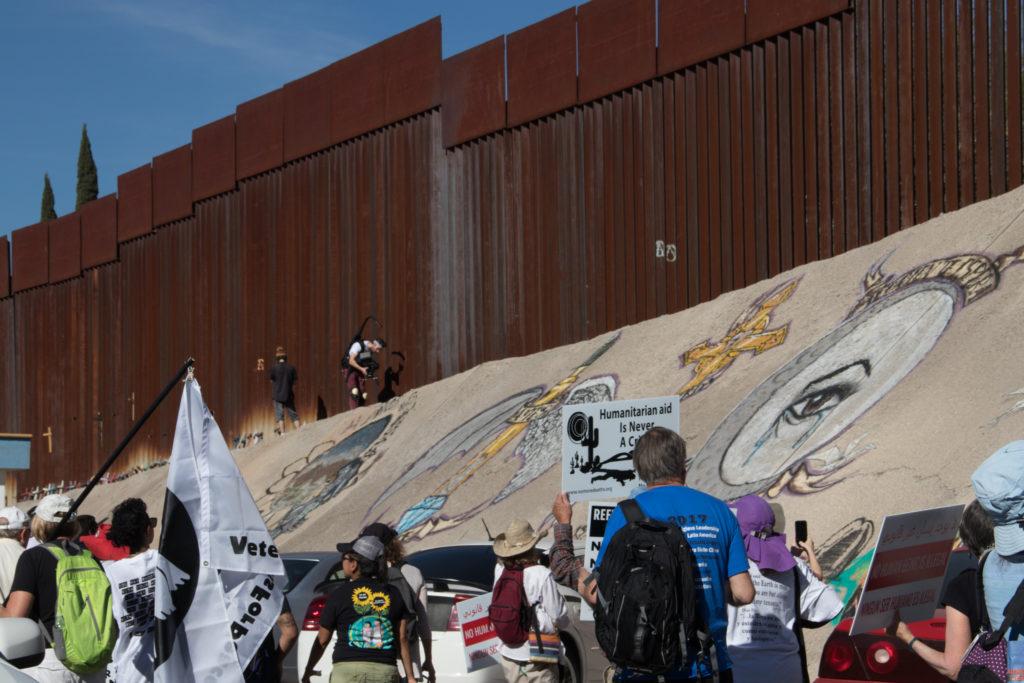 Amid the longest government shutdown, the president focused his and the public’s attention this week to border security. President Donald Trump addressed the nation on Tuesday, Jan. 8 to argue for the construction of a steel border wall and to discuss border security surrounding what he calls a “crisis at our Southern border.”

A day later on Jan. 9, the president met with congressional leaders to discuss possibilities of reopening the government. Then, on Jan. 10, Trump visited McAllen, Texas on the U.S.-Mexico border where he sought to again make a case for the creation of a border wall and to be briefed on its construction thus far.
The address
President Trump reached out to major news networks days before he planned to give his address, sending them into a frenzy about the ethics of whether or not to televise the speech.

I am pleased to inform you that I will Address the Nation on the Humanitarian and National Security crisis on our Southern Border. Tuesday night at 9:00 P.M. Eastern.

Despite their initial deliberation that included considering several factors “including [Trump’s] record of deception and his tendency to ramble off script in long speeches,” according to CNN, the president took primetime on major networks and the same amount of time was given to democratic party leaders Nancy Pelosi and Chuck Schumer for their response.

Following the speech, The New York Times, CNN and other news organizations compiled lists of statements made by President Trump that had little to no truth to them or were framed in the wrong context.

The president focused on the need for the border wall while the Democrats explained the effects of the shutdown. Both parties are still not in agreement on how to move forward with border security or plans to reopen the government.

For some Manual students, the president’s address seemed like a way “to play [to] people’s sympathies in order to advance his agenda,” Caroline Bowling (12, HSU) said.

Others believe that despite Trump’s position that his address was necessary, it was “meaningless,” Andrew Meiners (11, J&C) said.

“The address was […] just like the videos he tweets all the time,” Meiners said. “All it did was harden Democrats’ and Republicans’ stances and prolong a solution.”
The meeting
During a meeting between President Trump, Speaker Nancy Pelosi and Leader Chuck Schumer, the Democrats aimed to discuss putting an end to the partial government shutdown.

However, Trump “stormed out […] after Speaker Nancy Pelosi said she would not fund a border wall even if he agreed to reopen the government,” according to the New York Times.

Despite reports that the meeting was not successful, some Manual students believe that the ability of leaders to sit down and attempt to understand each other is success enough.

“The televised address and bipartisan meetings are positive things even if just on symbolic grounds,” Daniel Biggs (12, HSU) said.

While the shutdown could continue for months or even years according to President Trump, students at Manual are seeing the real effects of putting the American people in the middle of politics.

While 800,000 workers missed paychecks on Friday, students agree that it is “unfair that [Trump] and congressmen are still getting paid while hard workers who need their paychecks […] aren’t getting paid yet are still forced to work since they’re the backbone of the country,” Bowling said.
The visit
Toward the end of the week, the president visited the U.S.-Mexico border where he was briefed “on the perils of drugs and violence seeping across the Mexican border,” according to The New York Times.

Residents of McAllen, Texas spoke with reporters about how the funding for the wall could be spent protecting wildlife, funding schools and hospitals or on new technology that would protect the border and American citizens.

The New York Times reported that “the border depicted by the president and the one lived by most McAllen-area residents are two very different places. The collision between the border’s reality and how it is being portrayed for those thousands of miles away came sharply into focus” during the visit.

The visit itself seemed more like a “political stunt” according to students.

“The visit to the border was a tremendous waste of national resources and was more akin to a campaign rally than a governmental affair,” Biggs said. “Transit should be done according to necessity, not to make a sound bite in an area where much contention lies.”

While most Manual students are Kentucky natives, they still agree that a wall on the Southern border is not the answer.

“Most undocumented immigrants come legally via travel visa and stay after it expires so a wall would do nothing to stop this type of illegal immigration,” Meiners said.

Students, as well as other American citizens around the country, have proposed new ideas on how the government can address border security and immigration including renovating legal ports of entry and using an increase of “modern technology, including cameras, fixed towers and aerial and underground sensors,” according to Texas Representative Henry Cuellar.

“The issue of border security wouldn’t exist if we took the problem from its source and tried to aid foreign governments,” Bowling said.

With the week finally coming to a close, no bipartisan legislation to appropriate funding for the wall and no decision to reopen the federal government, students expressing similar feelings that they were at the beginning of the week.

“His ideology surrounding those immigrating to our country is hypocritical and blatantly racist,” Frances Millar (12, VA) said. “His ideas of protecting our border with a metal wall are childish. This entire situation is so upsetting.”