JCPS headlines to watch for the spring semester 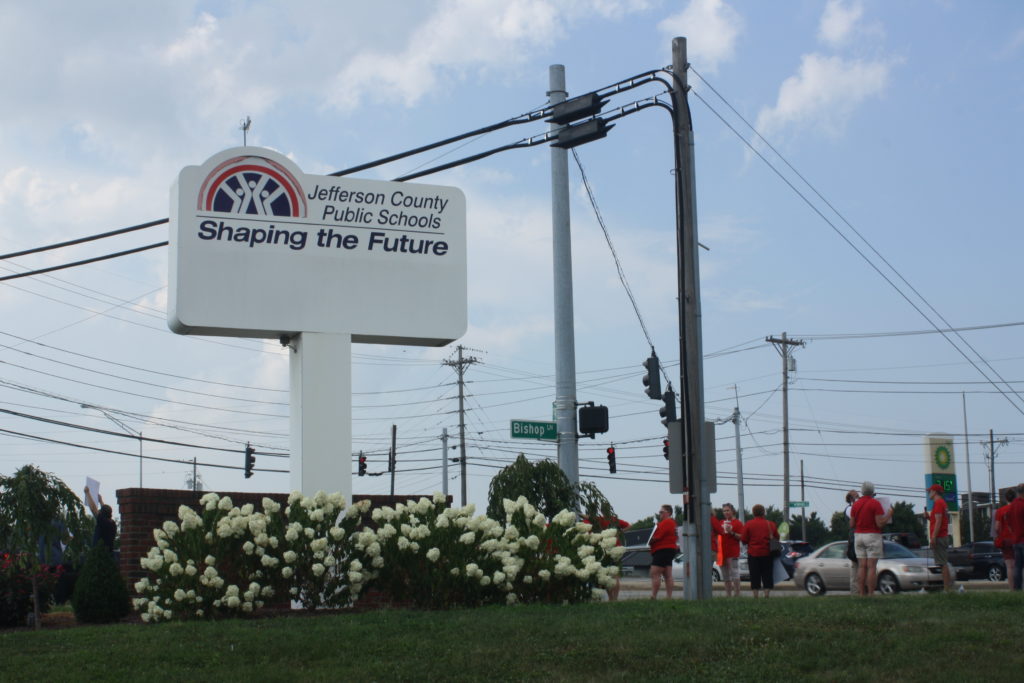 JCPS Headquarters the day of the rally. Photo by Phoebe Monseur.

JCPS is in the headlines almost daily, making it hard to keep up with the news surrounding the district. Here’s what to keep your eye on in the coming months leading into next school year.
5. Apprenticeship program
Last Friday, JCPS announced a new apprenticeship program for several high schools within the district. The program aims to give students hands-on experiences with entry-level jobs including early childhood education and graphic design at the district level, and culinary, information technology and diesel technicians at the career level.

I was proud to help celebrate the launch of our new @AcademiesofLou apprenticeship program today! Such a critical initiative for our @JCPSKY students and community. More on the event and other important highlights from the week in my Wrap Up: https://t.co/8FlIqUwzYV. #WeAreJCPS pic.twitter.com/jXvpfpQJuc

JCPS partners with several businesses and Friday marked the anniversary of their Academics of Louisville initiative. Superintendent Marty Pollio said that some students may be paid for their apprenticeship while others could receive school credit.

The Academies of Louisville initiative serves 17,600 students at 14 high schools.
4. Racial equity
Earlier this month, the JCPS school board passed a racial equity plan which aims to lessen the achievement gap between white and black students, promote a more diverse teaching staff and improve access to district programs for minority students.

Originally, minority students made up 77 percent of suspensions within the district, however, Olivia Krauth of Insider Louisville recently reported that suspensions and referrals “largely continue to trend downward”, and one racial gap decreased by 10 percent.

Students of color are disproportionally less likely to be identified as G&T or take advanced courses, according to district data.

I wrote about it, in part, in May: https://t.co/kIGWhQCJow

The success is attributed to district efforts to reduce inequity in punishments, which appear to be working. African-Americans are still almost three times as likely to receive a suspension than a white student, so it will be interesting to see how the district overcomes this problem.
3. Staffing and powers
Along the lines of racial equity, staff members in JCPS continue to feel discriminated against by superiors or other coworkers. In December, Kerrick Elementary Principal Lawanda Hazard filed a lawsuit against the district citing “an absolute nightmare in the labor force,” when referring to assistant superintendent Glenn Baete.

These growing tensions in the district signal a rift in the relationship between district and school leadership, as noted in other lawsuits involving stakeholders like the one mentioned in the section below.

Additionally, Senate Bill 3, currently in the Kentucky legislature, would strip School Based Decision Making Councils (SBDMs) from certain powers pertaining to the selections of staffing and principal selection within JCPS and Kentucky schools. The bill would also remove a teacher seat, giving parents and teachers equal representation on the committees.

Decisions made on behalf of students should be made by the people closest to their needs: parents, teachers, and principals. Stop SB3, which erodes and overrides the authority of SBDM councils.

2. Bullying and lawsuits
Tami Charles’ 10-year-old son, Seven Bridges, was allegedly bullied on the bus to the point of suicide. Charles’ said that her son was called a racial slur in one instance and choked in another.

Seven was born with a bowel condition that required numerous surgeries and he was bullied because of it. Pollio said they are looking into the incident and will “get to the bottom of how things were addressed at the school level.”

Charles and her husband plan to sue JCPS, citing ineffectiveness in handling the situation from both Kerrick Elementary and the district as a whole.

JCPS has had eight students die by suicide this year, an increase from three last year. The district will continue investigating bullying in JCPS schools, especially as the lawsuit plays out.

Pollio held a press conference on Thursday to address concerns around the district’s policies and how they plan to learn from these reports of bullying and resulting suicide. See the thread below.

1. Attendance policies
JCPS recently started a new initiative to boost district attendance through incentives and celebrity appearances at various schools around the district.

#EveryDayCounts! That’s the message we took to @LPASlou when we surprised students with a pop-up party 🎉 for having good attendance!

👀 our pics of the students and many incredible community partners who helped make it a success!

Speakers at Lincoln Elementary stressed the importance of missing no more than six days of school per year and described the district’s goal of attendance rates being 96.5 at every school.

Students who regularly miss school are less likely to graduate on time according to district research.

“Data shows very clearly that when students improve their attendance, they improve their academic prospects, their chances for graduating and going on to college and ultimately, succeeding in life. And for our city to succeed, we need every single one of these kids to succeed and contribute,” Mayor Greg Fischer said in support of the new district policy.