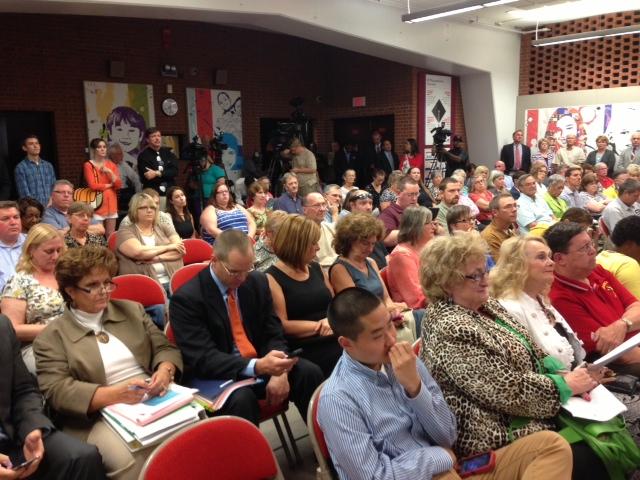 Jefferson County Public Schools (JCPS) has two minority members serving on its Board of Education for the first time since 1979. Diane Porter of District 1 and Corrie Shull of District 6 are both seated on the board.

.@dporterJCPS adds that this is the first time since 1979 that two minorities have served on the Jefferson County Board of Education.

Her last position within the district was director of Career/Workforce Education and the School-to-Career Program.

On Parent-Teacher Conference Day Monday, @JCPSKY families are invited to meet @JCPSAsstSuptMS, members of her team, and @dporterJCPS!

After retiring in 2009, Kentucky’s Education Commissioner Terry Holliday appointed her to serve on the JCPS Board of Education in 2010. Voters in her district would later elect to serve on the board later that year.

Porter is now the chair of the Board of Education and she was the first African-American female to hold the position. Earlier this year, Diane Porter received the Freedom Award to honor Dr. Martin Luther King Jr.’s vision.

She currently represents Manual and YPAS in District 1.
Corrie Shull
Corrie Shull is one of the newest members to the JCPS Board of Education. Voters in District 6 elected him last November and was sworn in at the January 8 meeting.

He attended Fisk University where he obtained his undergraduate degree and his masters from the Louisville Presbyterian Seminary.

It was an esteemed honor to give the #MLK Shabbat sermon this Friday at @thetemplelouky! I was super humbled by the congregation’s warmth and kindness and interest. Special thanks to Rabbi Rapport and Rabbi Rooks for the kind invitation! pic.twitter.com/VuxMIO0Kpp

Shull is a parent of two Tully Elementary students, and he previously served on the district’s Facilities Committee and the Behavioral Support Alternative Task Force. He also participated in JCPS’ Flash Dads program which mentors middle school boys.

He is also the pastor of Burnett Avenue Baptist Church where he provides summer programs, tutoring and college visits for JCPS students.