BHM, REVIEW: The Hate U Give 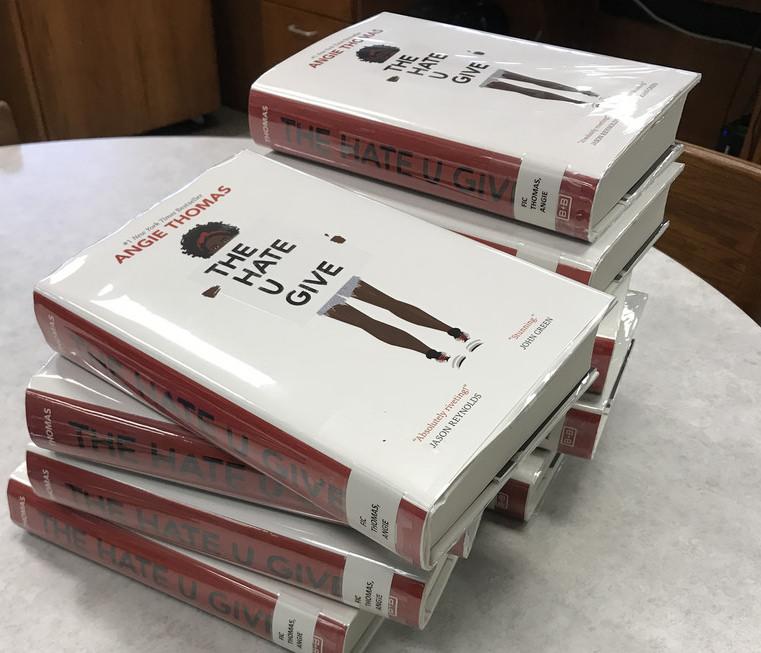 The Hate U Give Book by Piper Hansen
Starr Carter, a 16-year-old black girl, witnesses the shooting of one of her childhood friends as they are leaving a party hosted by students from their predominantly white high school. The Hate U Give by Angie Thomas follows Starr’s story as she struggles to find her identity within the black community, copes with a lack of accurate race representation in the media, understands the importance of criminal justice reform and more importantly, addresses the epidemic of police brutality.

The story is riveting, emotional, hopeful and uncomfortable. While it’s classified as a young adult fiction novel, the surreal depictions of police brutality and protest could easily be scenes from a non-fiction recollection of such events.

It deals with real things that African Americans all over the United States encounter daily. The issue of police brutality and the book’s overall tone as a response to the Black Lives Matter movement is an interesting commentary of racialized violence in America. It’s a perfect testament to making sure that people, whether they’ve dealt with it first hand or not, understand the implications of unsolved conflict amongst groups of people.

During Black History Month, one of the things that the Manual RedEye staff discussed prior to starting our coverage was our intentions to remember our past while simultaneously uplifting the voices of those who are taking extraordinary steps toward a better future. The Hate U Give is one of the best examples I’ve come across of the idea that we are in control of our future and changes we want to see will soon become a reality.

While there are messages of enticing violence to achieve peace, the overarching themes of inspiring young people to use their voices to speak up for others they’ve lost or for others who they see being treated unfairly, are ever present in the novel.

The book’s first-person perspective allows readers of all ages to find pieces of themselves in Starr whether it’s trying to please a parent, sticking up to bullies or dealing with grief. Her narrative tells readers what it’s like to face something that has plagued minority communities for years and has yet to find an end.

Toward the end of the book, Starr says that “The truth casts a shadow over the kitchen — people like us in situations like this become hashtags, but they rarely get justice. I think we all wait for that one time though, that one time when it ends right. Maybe this can be it.” Her words resonate with all kinds of readers — her words and her character have inspired me to make sure that the issues that matter to me the most are turning into real action and not just words on the internet. It’s one thing to tweet about something, it’s another to hold a protest and it’s a completely different ballpark when you write, call or talk to a policymaker.

The Hate U Give calls on all of us to make a difference, practice empathy, to use our voices and to talk about uncomfortable topics that we typically leave alone because we don’t know the answers. Discussing with community members and legislators is what makes problems like police brutality come closer to end. Those conversations are what bring us closer to achieving equality — a facade our country has beseeched for centuries but has never achieved.

Recognized in 2018 by the American Library Association and their Ethnic and Multicultural Information Exchange Round Table as well as the National Book Foundation and several other organizations, Thomas’ novel is celebrated globally for its direct message about the protection of human rights.
The Hate U Give Movie by Emma “E.P.” Presnell
Keep your hands on the dashboard, don’t make any sudden movements, comply with the cops and don’t give them a reason to escalate. As a young girl, Starr (Amandla Stenberg) hears these words for the first time and is told the common protocol many African-Americans know in the event they get pulled over by the police. It’s this theme of fear, hate and balance that make up Starr’s life in “The Hate U Give.”

The movie focuses on Starr Carter, a 16 year-old who lives in Garden Heights, a predominantly black neighborhood but attends Williamson Prep, a white private school. One weekend at a party, a fight breaks out and her childhood friend and crush, Khalil (Algee Smith), takes Starr away from the party with intentions to take her home, but the two are pulled over by a police officer. Khalil is shot when reaching for a hair brush in his car, but Starr lives and goes on to fight for justice of Khalil while maintaining the balance of her two lives and the relationships that come with them.

Adapted from Angie Thompson’s book of the same title, George Tillman Jr. does a good job at keeping the adaptation close to the source material and taking on a heavy subject while keeping it the feel of a young adult film. It feels similar to “Love, Simon,” the movie adaptation of Becky Albertalli’s “Simon vs the Homo Sapiens Agenda” with its themes of mature topics and how they are viewed from a teenager’s perspective. Tillman also does well in making the audience aware of how Khalil’s case is being treated without shoving it in the viewer’s face by balancing it out with Starr’s relationships.

At Williamson, Starr struggles with expressing herself freely with both her boyfriend (K.J. Apa) and her friends, especially Hailey (Sabrina Carpenter) who consistently says racist and upsetting things to Starr about the police and her race. Her behavior around these people help the viewers understand her personality better by showing the carefulness and precision in her actions. As “Starr version two,” she holds herself accountable to “not be ghetto” or give any of the white kids at the school a reason to call her out for not belonging there which ties into the theme of staying true to yourself and the act some people feel they need to put up to “fit in.”

In addition to that theme, the story includes themes on violence, hate and love. While the characters themselves are written in such a way to showcase these ideas, the use of lighting and colorization furthers them. When Starr is with her family in Garden Heights, the colors are vibrant and lively which represent her being herself and not feeling like she has to hold back on her actions and the diversity of where she lives. In contrast, when Starr is at Williamson the colors are much more bleak and white washed which represent both Starr version two and the overwhelmingly white population at the school.

In terms of how the characters go about their issues, the movie does a decent job but cuts out some parts of the book that further show how Starr and her family are affected by what’s happening.

In addition, there are a couple of chronological changes that draw out the scenes more and create or even remove the seriousness or drama of the situation. For some scenes it makes sense to not draw it out as they are arguably flaws of the book, but some scenes get so rushed and swept aside it feels like there should be more. An example is at the beginning of the book when Hailey tells Starr to chase after the basketball like it’s fried chicken during gym class which is drawn out more in the book because it’s one of the first encounters of racism during the story but in the movie it gets less than a minute of attention.

The end of the movie also feels a bit rushed but in the moments where it slows down to highlight the actions on screen, it’s motivating and emotional. A reoccuring point throughout the movie is that “thug life” stands for “The Hate U Give Little Infants F*cks Everyone” and how hate is spread throughout our world even from when we’re young. It highlights the importance of love and safety growing up and how that affects our future generations.

While the movie isn’t perfect, it does a great job at staying true to the source material and uses its time to educate people on both the issue of police brutality and the concepts of hate and love in our world.