BHM: Assembly emphasizes a message of growth and progress 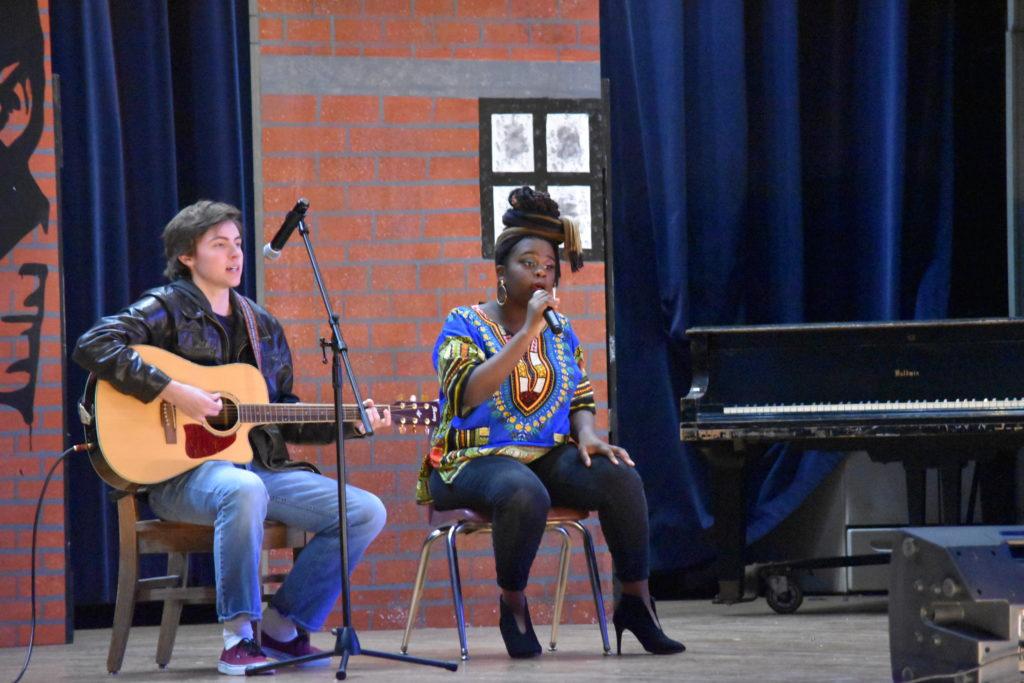 Jonathan Sutphin (11, YPAS) and Jania Gomes (11, YPAS) perform an acoustic rendition of Bob Marley's "Redemption Song." This was just one of Gomes' many performances in this year's program. "It’s a song that brings peace, because it’s saying, ‘We’re done with the hatred, we’re gonna overcome this, and we’re just all gonna sing and come together,'” Gomes said. Photo by Piper Hansen.

Every Manual student had the opportunity to view the 18th annual Black History Month Assembly this morning that was named and dedicated to a quote from influential abolitionist and journalist Frederick Douglas. Posters in the auditorium backed performers’ messages of unity with his famous words of “if there is no struggle, there is no progress.”

Organizers of the program from Manual’s Drama Club, advised by Ms. Nicole Finley (English), made sure that even though the assembly was to celebrate Black History Month, performers could be from all backgrounds as long as their creative contribution fit within the theme.

“Manual is considered a diverse school but I want people to understand that just because it’s a Black History Month program, and it has the word ‘black’ in it, that it’s not just exclusive to black people. It should be more inclusive than exclusive,” Regis Wilson (12, MST), one of the two program hosts said. “At the end of the day, we all bleed the same color blood.”

Performances varied, as they do each year, from original songs, to live paintings, to dance routines and from song covers to poetry readings. The assembly opened with a performance of “Oh Freedom” by the Youth Performing Arts School’s Concert Choir followed by the Black National Anthem, Sean Waddell’s (12, HSU) original poem “To Liberation,” a performance by the Dreamer’s Step Team and an original song with an accompaniment of a live artist addressing police brutality.

While most of the program’s performers were Manual students, the invitation extended to all magnets and to some community members including Young Prodigy IRAP and Mighty Shades of Ebony showcasing some of Louisville’s groups that work to uplift minorities.