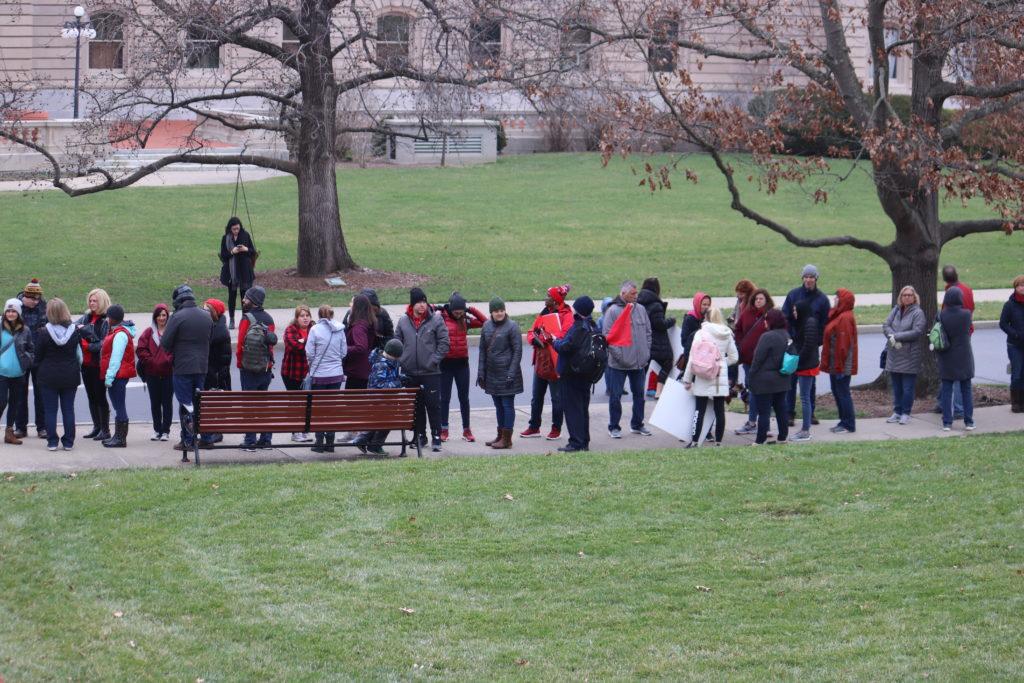 House Bill 525 (HB 525) passed through the House committee with a vote of 11-6 despite the closure of two of the state’s largest school districts that allowed teachers and students alike to protest in Frankfort this afternoon.

On Wednesday Feb. 27, Kentucky 120 United asked educators to call in sick in order to tell legislators to vote “no” on HB 525. Jefferson, Fayette, Madison, Marion, Bath, Carter, Boyd and Letcher counties closed due to the high number of unfilled absences.

Hundreds of teachers from all over Kentucky united in Frankfort this morning, occupying the Committee room and the front steps of the capitol building.

Along with the information released by Kentucky 120 United about HB 525, Nema Brewer, the group’s founder, called the bill just “as destructive to pension assets as any bill could be” in the original Facebook post and then later posted on Twitter that “if you think this is about a pension board — you haven’t been paying attention.”

If you think this is about a pension board, you haven’t been paying attention. #120Strong 💪

While speaking at the committee meeting, Stephanie Winkler, president of the Kentucky Education Association (KEA), affirmed the sentiment.

KEA and Kentucky 120 United have been pushing back on both House and Senate legislation regarding pension reform since last March when they felt personally targeted and ignored by the Kentucky General Assembly and staged a two-day “sick-out.”

Standing behind both organizations, protesters wanted to make sure that legislators knew just how many issues went into their decision to call in sick.

“I’m here to ensure that our legislators understand that a lot of what’s at stake is not just the teachers now and the pension now, it is the future of education,” Steve Johnson, a graphic design teacher at Eastern High School said. “Public education is a pillar of democracy, it is a social institution that is important for a viable society.”

One of the major reasons behind the sick-out was the multifaceted issue of pensions and privatization in Kentucky, according to teachers.

“It’s not about a pension board, that’s for sure,” Evan Barker, English teacher at Madison Central High School, said. “I’m here because I resent that in order to do my job, I have to worry about people selling the assets of the public off to private hands.”

However, for the sponsor of the bill, Representative Ken Upchurch (R) said that the bill’s purpose was to put power in the hands of the educators by adding different education organizations to the pension board.

Others, like Representative Joe Graviss (D) voted “yes” with the goal of amending the bill before possible passage on the House floor. Graviss said that he would vote against the bill later if it stayed the same.

HB 525 is an act relating to the Teachers’ Retirement System board of trustees. KEA runs the pension board’s nomination process and has named four of the 11 board positions to teachers and administrators.

“The bill basically takes teacher’s voices off of the [pension] board of the Kentucky Teacher Retirement System which in my opinion, takes the voice away from teachers who depend on that pension,” Rep. Rocky Adkins, Democratic leader of the House, Governor candidate and former public school teacher, said.

“If [the broken pension system] doesn’t affect you today, it will affect you tomorrow,” Brewer said. “This bill is just another attempt by the governor and his cronies to chip away at pensions by whatever means they can find. They want to take away our voice, reorganize and make it look good.”