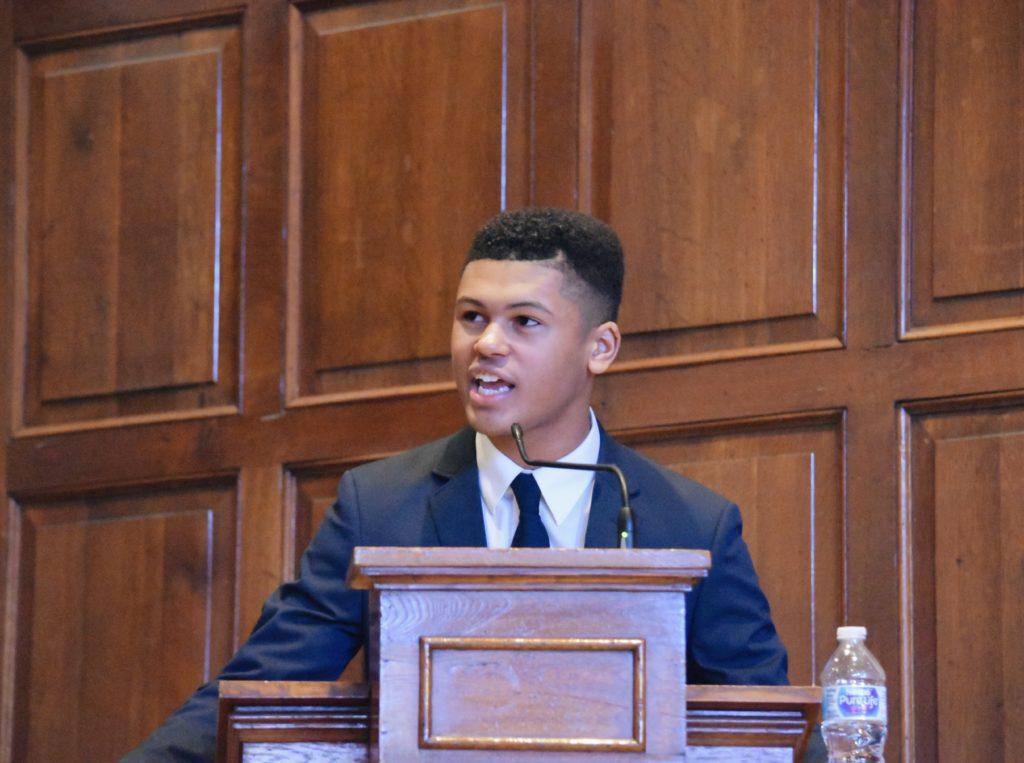 Sean Waddell (12, HSU) presented his original poem "To Liberation" that he hopes puts Black History Month into perspective. "[Black people have] contributed greatly to human kind, involuntarily and voluntarily. The least people can do is pay respect and honor," Waddell said. Photo by Piper Hansen.

African American Studies is a class now offered as a social studies credit. Students have already begun to relish in this project-based curriculum that ties current issues and current events into the historical time period under examination.

The class is taught in chronological order, starting with the very beginnings of American history and working through slavery, the Civil Rights Movement and present-day struggles. The various videos shown in class depict the stories of real individuals during difficult times as well as literature that enlightens readers to understand past hardships are two of the many favorite things about the class according to students.

“It was really important to me when designing this course, that it was based upon the concepts of oppression and resistance,” Mr. Timothy Holman (Social Studies) said. “Throughout African American history there’s been systemic racist practices within the country that limit African Americans’ ability to reach their true potential. We’re constantly talking about both that reality and how all Americans can work toward greater equality.”

While the content of the class constantly holds student’s attention, a lot of underlying messages and lessons come from weekly discussions of current events and personal experience that is often shared by the students with the entire class.

“I have learned that all voices regardless of the body they come from are equally powerful,” Alphonso Nichols (11, HSU) said. “It’s the choice of words that makes a speech impactful, not the person delivering it.”

When it comes to Black History Month, students want more Manual students to voice their opinions on controversies that have taken hold of an entire community.

“I want people to know that even if you are not black, your opinion is appreciated,” Jediah Holman (12, J&C) said. “I want to hear more voices. No matter how ugly the comment, I want to know how people feel about the acts of their ancestors.”

For years, Black History Month has been talked about as a unifying celebration, however, some students see it as something a lot less extraordinary.

“I think in some ways this class is a response to the tokenism of Black History Month,” Mr. Holman said. “I don’t think there’s anything wrong with having a Black History Month but black history is American history so I would prefer to see a history where everybody feels included and represented within the historical narrative.”

“If we’re doing what we’re supposed to in this class, we shouldn’t need a Black History Month, it should just be a part of what we do,” Mr. Holman said.

Most class discussions involve local and national issues, but some African American Studies students see some of the same issues in Manual’s hallways.

“[The class has] actually reminded me of how much diversity Manual lacks,” Holman said. “We have one class to teach us about our history and it’s taught by a white man. Don’t get me wrong, I love Mr. Holman, but sometimes it just doesn’t feel right.”