Here’s what you need to know about KYGA19 education legislation 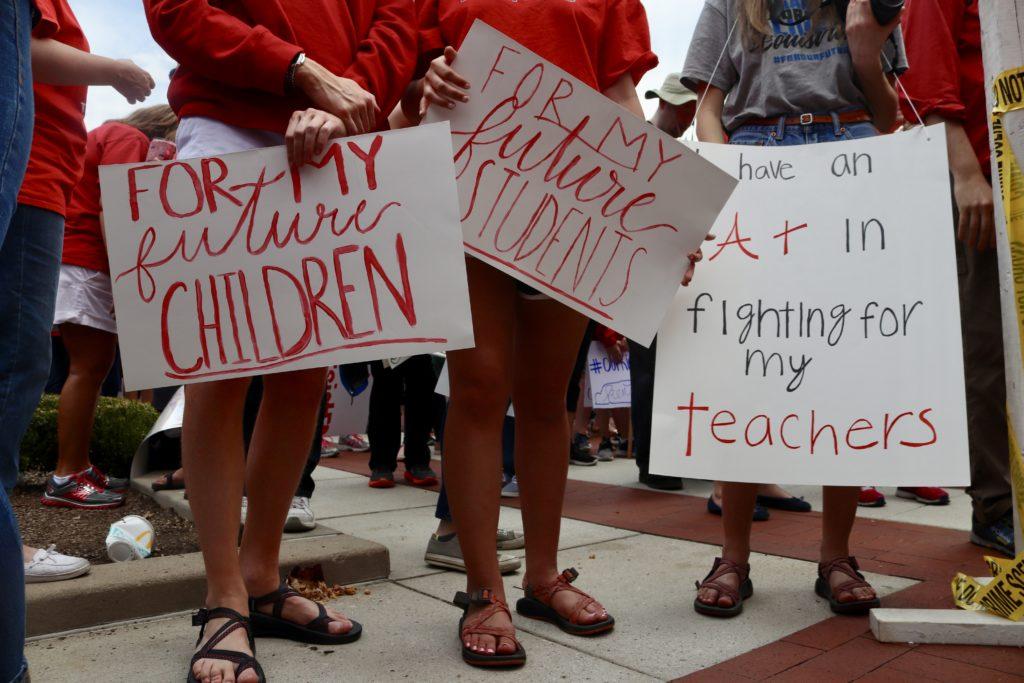 Students walk their talk at the capitol building in Frankfort, Kentucky. Photo by Cicada Hoyt.

Last Thursday, Feb. 28, eight school districts cancelled classes due to unfilled absences that allowed hundreds of Kentucky educators to protest House Bill 525 (HB 525) in Frankfort as it passed through the House Committee.

Kentucky 120 United, a grassroots organization that supports educators and other public employees, took to Twitter on Sunday March 3 and announced that they were “prepared to strike for the betterment of our state, the survival of our communities and the economic security of our families.”

Lines in the sand.
Enough is enough.#120Stronghttps://t.co/qNgF1ZDCK0

— 120Strong (@120Strong) March 4, 2019
Superintendents from all over the state met yesterday in Shelby County where they expressed mass opposition to House Bill 205 (HB 205).

Jefferson County Public Schools’ (JCPS) students have been curious since last Thursday’s protest as to whether or not teachers and administrators will continue to protest last minute education legislation. Because the teachers are divided themselves, with more than one advocacy group spreading messages about what action educators should take next, it has become increasingly difficult to tell when a protest or strike will take place. Before students start questioning whether or not to do their math homework, they should use the following summaries to understand just what teachers are fighting for this legislative session.
House Bill 525
This year’s legislative session pension bill, HB 525, outlines a complete restructuring of the state’s pension board that “takes the voice away from teachers who depend on the pension,” according to Representative Rocky Adkins, the state’s House minority leader, a governor candidate and former public school teacher.

Right now, the Kentucky Education Association runs the pension board nomination process and has named four of 11 board positions to teachers and administrators. The proposed change will make seven state-wide organizations in charge of nominating one person each to the board:

The bill passed through committee last Thursday and was posted for further debate and passage on March 4. However, the bill was not taken up by the larger group of legislators on the fourth and has yet to be discussed.
House Bill 205
While it does not directly impact teacher pensions or salaries, HB 205 would award any person in Kentucky who donates to private education scholarships with “annual dollar-to-dollar tax breaks up to $1 million,” as summarized by the Courier Journal.

Opposition and protest of HB 205 arguably closed schools today when JCPS teacher organizations sent a message of persistence ringing through the district.

Opponents have argued that the bill will drain public school funding that comes from the state but proponents, including the bill’s sponsor, Representative John Carney, think that it provides students with more choice in their school and argue that it is just another window for opportunities in education.

On Tuesday, March 5, the bill was brought to the House Committee for discussion. Carney told the Committee Chair that he believes some “public school educators are more concerned about the dollars coming into their district than they are about students,” according to the Lexington Herald Leader.

During the bill’s discussion yesterday, Carney mentioned that he currently does not have the 60 votes in the House in order for the bill to pass but he is hopeful due to Governor Matt Bevin’s support. According to the Courier Journal, Bevin said that he has “no concern that the bill would hurt public education.”

But opponents of the bill are more than concerned about the bill’s effects on public education. Several educators are worried that it might be attached to the tail end of House Bill 354 that was also discussed this morning.

“HB 205 will essentially deprive public schools of quite a bit of money over the coming years,” Dr. Christopher Kolb, District Two Representative on the JCPS Board of Education, said. “It’s taking general tax revenue from the state that they could dedicate to public school education and allowing people to dedicate it to private schools which is probably unconstitutional since private schools include religious organizations.”

I’ll put this out there if no one else has—all 867 locally-elected school board members and 173 superintendents in Ky should come together on Mon or Tues to shut the capitol down. HB205 is straight-up stealing from kids (and it’s unconstitutional). @ksbanews @GYMObrad @JCPSKY

— Christopher Kolb (@cmkolb) March 3, 2019
Several other JCPS Board of Education members were outspoken about their opposition to the bill including Superintendent Dr. Marty Pollio who joined the list of Kentucky superintendents who oppose the bill and District Seven Representative Chris Brady.

Hypothetically, if a superintendent were to call off school in their district to protest a policy that would insidiously harm students, the community, and the commonwelth, then I wouldn’t hold that against the super. In fact, I’d support that decision.

JCPS’ partial state takeover position
At the end of the 2017-2018 school year, the KDE recommended a state takeover of JCPS following a management audit that found the district continued to struggle with student equity, student restraint and seclusion as well as a limited budget that prohibits facility needs. However, JCPS filed to contest the takeover and Louisville lawmakers are seeking to pass legislation this session that would restrict the state’s power in future management conflict.

While the KDE has not released a position on either HB 525 or HB 205, the actions of JCPS and the rest of Kentucky public educators are extremely unprecedented.

“Despite the antagonistic relationship between JCPS and the KDE over the last year or so, we always prefer to work with the KDE,” Kolb said. “We try to make sure that we see the other person’s perspective [… the KDE hasn’t taken a stance on 205] and that’s why I think we saw so many superintendents come out so publicly against it [which seems unprecedented].”
A possible public employee strike or “work stoppage”
Based on discussion in Frankfort and in chatrooms this afternoon, there is a high chance that school will be cancelled tomorrow for JCPS students. The teachers have yet to declare their sick-out as part of a strike and that, like the superintendents united voice, would be unprecedented as well.

“I would completely support [another sick-out or long-term strike],” Kolb said. “I really believe in teachers, or any other group of employees, having the right to make their own decisions about courses of action. I think that teachers and other public school employees have really been backed into a corner.”

The state of Kentucky is split on whether it is morally right to keep students out of school. However, there is a strong message coming from JCPS.

“I am really just so incredibly tired and frustrated by this nonsense from Frankfort,” Kolb said. “It is such a massive distraction from what we all should be doing which is focusing on educating kids to the best of our ability. I wish everyone would realize that no matter what happens, public schools in Kentucky are still going to be the system that educates the overwhelming majority of Kentucky children.”