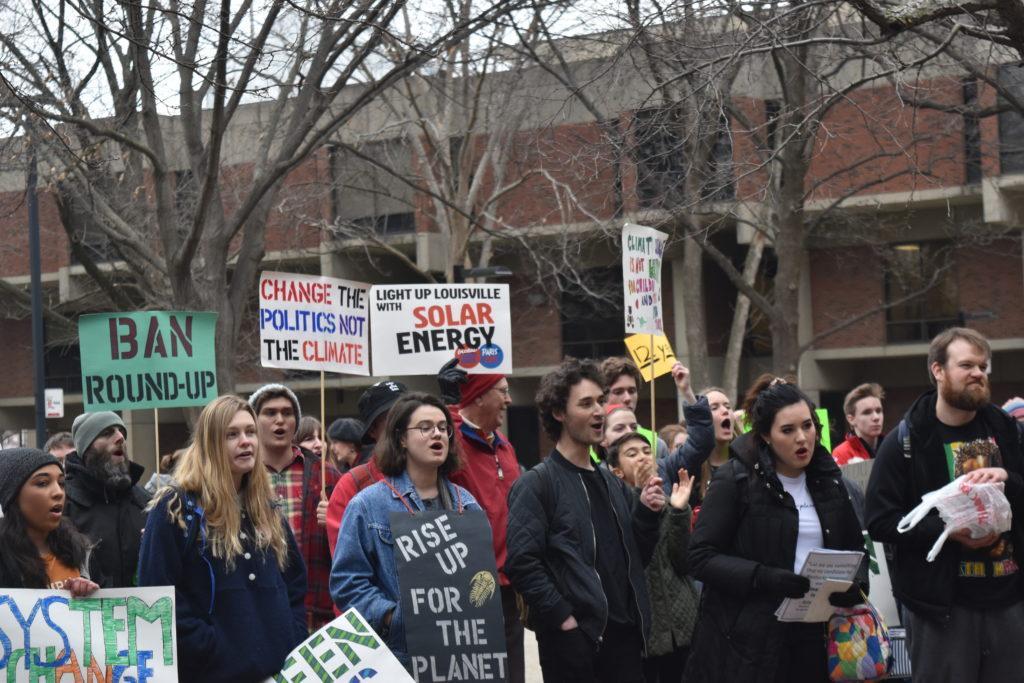 While students were in the majority, several older university faculty members came to support the fight for environmental justice. Photo by Piper Hansen.

Manual students Destine Grigsby (12, YPAS) and Oli Tierney (11, VA) are contesting their one day suspensions after walking out on Feb. 22 in support of the Green New Deal and as part of international walkouts in support of climate change reform.

After news spread that the girls were being punished, Attica Scott, 41st District Representative in the Kentucky House of Representatives, spoke out on social media expressing her support for the students but falsely claimed that they were suspended for five days.

Proud of the two brave @duPontManual students who walked out of classes Friday for a #climatestrike + #GreenNewDeal.
My alma mater’s response to them fighting for their futures + leaving 10 mins early is a 5-dy suspension. Call Principal Farmer to show support for Destine & Oli.

According to the handbook, Level Three Offenses will “involve the short-term removal of a student from the school environment […] the duration of the short-term suspension, if issued, is to be limited as much as practicable while adequately addressing the behavior.”

“It’s important for people to know that sometimes the punishment doesn’t fit the act,” Scott said, explaining her immediate response on Twitter. “I want people to walk away from this situation knowing that although sometimes it may feel like all of our institutions and systems are set up in a way against young people, there are people on the inside constantly fighting for you.”

In various meetings with Manual Principal Mr. Darryl Farmer and Assistant Principals Ms. Vicki Lete and Ms. Paula Boggs, Grigsby, Tierney and other activists were told they would only receive two detentions and one session of Saturday school for their actions. However, when students, including Tierney and Mandala Gupta VerWiebe (10, J&C) met with Farmer on the day of the walkout, they were told of a possible suspension.

“The [administrators] never told us directly not to do anything,” Tierney said. “They told us we would likely face suspension if we did choose to walkout.”

But, as the record shows, both Grigsby and Tierney walked out anyway.

“Climate change is a threat that everyone in our generation is facing,” Tierney said. “It’s something that we can’t continue to ignore. What we were doing with this walkout was basically bringing attention to it and sending a message to the public that we are not going to back down to any challenges. We want to show people that we aren’t just playing around with this issue.”

When Tierney received the suspension, she met Lete with a series of hypothetical questions about punishment handed down by school administrators.

“I wasn’t surprised [to receive my suspension],” Tierney said. “But the way that Ms. Lete approached my questions was totally unacceptable which is just more evidence that Manual administration really has some work to do on transparency.”

Grigsby and Tierney are appealing their suspensions which is a process they were required to research on their own.

“The school is choosing to give us a Level Three punishment. We’re asking them to choose one of the lower levels of offense,” Grigsby said.

Through researching their own appeals process and administration criticizing the group’s organization of the walkout and their interactions with authority, there are still some grey areas on the school’s communication with the students.

“I’ve been getting really mixed communication about the whole situation,” Tierney said. “I think that’s really problematic because when it comes to serious matters like this, everyone has a right to be on the same page.”

Scott’s call for parents, community members and alumni to call Manual and voice their opinion of the rumored suspension time, led to Scott and Farmer conversing about the misinformation and Farmer’s intentions moving forward.

“It sounded to me like Principal Farmer really did want to try to do the right thing,” Scott said. “I think that he was wise in understanding that a lot of us felt like his response to Oli and Destine’s walkout was overreach and that instead our institutions of public education should be teaching about mass movements, protests and the role young people have played historically.”

Farmer spoke with both Scott and Manual students who organized the walkout about supporting the students in the future but making sure that no rules are broken and there is a general understanding of respect toward the school.

“I appreciate their conviction, their passion and I would like to support that,” Farmer said.

He expressed that if JCPS had released a plan of action for the way principals and administrators should have responded to said demonstration like they did in March of 2018, he would have acted differently.

But students are adamant about making sure that Manual administration knows that their walkout isn’t to defy school rules or the school itself.

“Walking out, taking a political stance and being able to do this political action is something we should have the right to do as young people,” Grigsby said. “We have a very large stake in the climate crisis and this is one way that we’re really going to be able to show our politicians how much we care about this.”