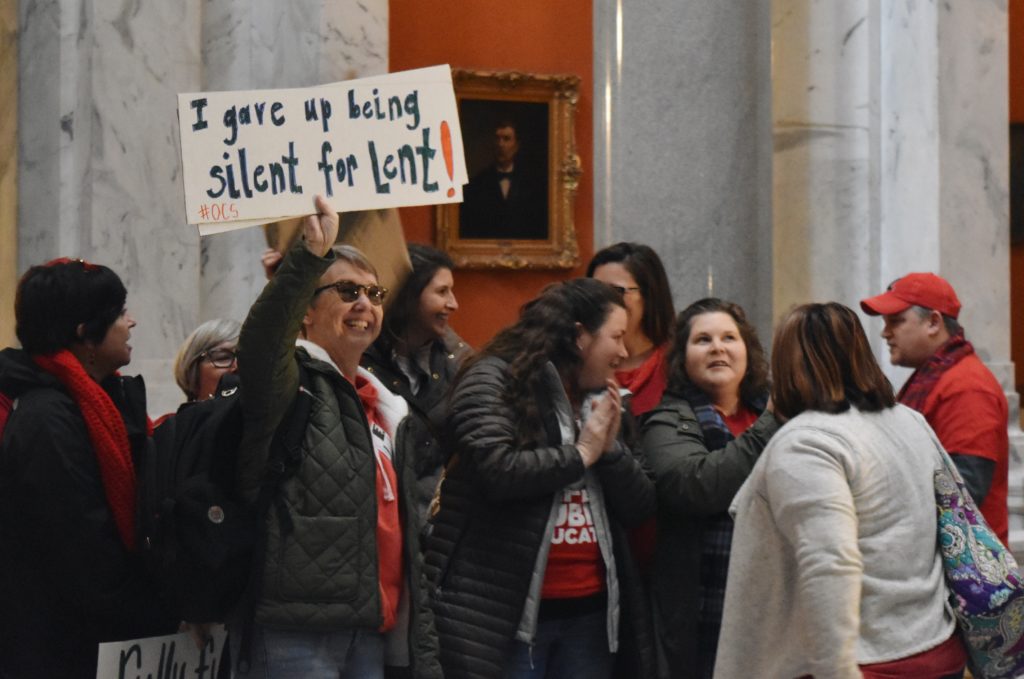 Teachers began to fill the capitol as early as 8 a.m. dressed in red and carrying a variety of signs. Photo by Piper Hansen.

Jefferson, Bullitt and Oldham counties closed schools for a third time this week due to another teacher sick-out. While occupying the House lobby, teachers chanted, heard speeches from House Minority Leader Rocky Adkins and Attorney General Andy Beshear and were given no clear answers on the standings of House Bill 525 (HB 525) and House Bill 205 (HB 205).

Both HB 525 and HB 205 were rumored to be discussed today but after two long recess periods, the House never reviewed them. Since there is no scheduled meeting for the House Appropriations and Revenues Committee, HB 205 is no longer its own bill.

Teachers are worried that HB 205, will be wrapped into another tax bill, House Bill 354 (HB 354), and passed without proper discussion of the added tax credit scholarship and its impact on public schools.

The possibility of another school cancellation is still unclear as there is not a legislative session scheduled for tomorrow. Special sessions can only be called outside of a regular session, however, some lawmakers assigned to committees on budget bills will meet. The session reconvenes on Tuesday March 12 at 9 a.m. where the bills could be voted on.

Jefferson County Public Schools (JCPS) and the Jefferson County Teachers Association (JCTA) came to an agreement earlier this evening that would still allow for a protest while classes and the Kentucky General Assembly are in session.

The district notified teachers, parents and students that their plan would allow “three individuals from each school [to be] released to travel to Frankfort next week for each day of the session.”

“I was in the classroom for 12 years and will always consider myself a teacher first.” @JCPSSuper sent the following letter to @JCPSKY educators and staff this evening following the agreement with @JCTAKY regarding the remaining days of the legislative session: pic.twitter.com/ZjVtubEc4j

Teachers are divided as to whether or not they will continue the sick-out while the Assembly is not in session. Organizations like Kentucky 120 United, JCPS Leads and the JCTA are sending mixed messages but teachers are obviously willing to stand their ground like they did today when they avoided the advice of the JCTA not to take action.

Some students are also opposed to the plan from JCPS, as they feel it limits them from voicing their opinions on the legislation.

The fundamental flaw with this plan is students will NOT have their own voice in Frankfort because we will be in school. Students have just as much to lose as the teachers in this situation. https://t.co/jgSTPbBWsD