After six days of “sick-outs,” what’s going on in the KYGA19? 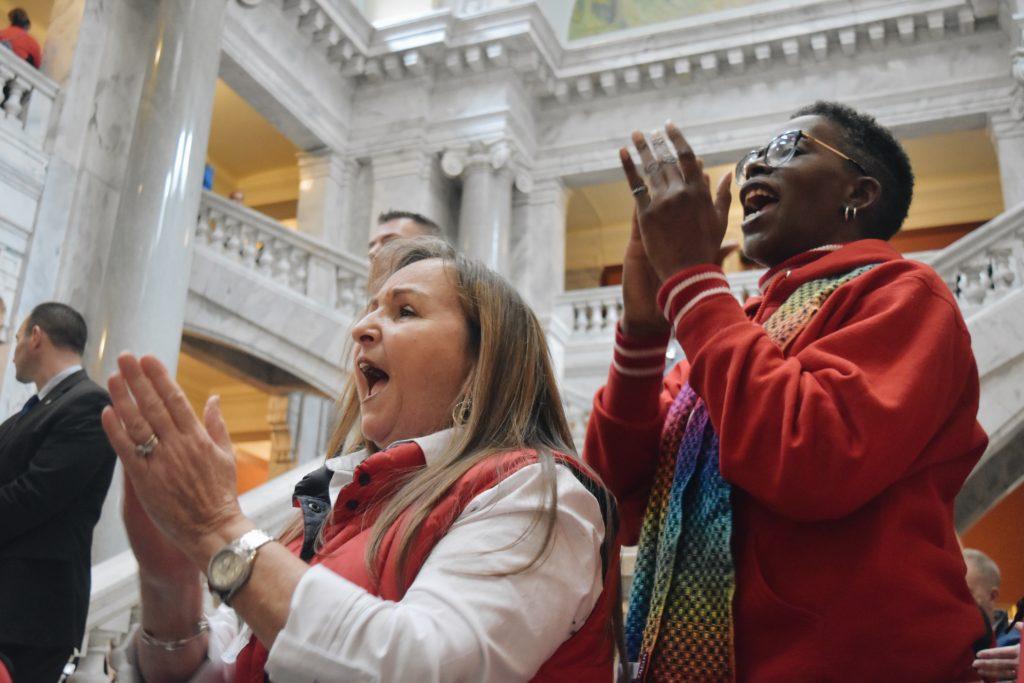 Educators from around Kentucky shared chants and led songs throughout the day as the House went in and out of recess. Photo by Piper Hansen.

This week marked days four, five and six of “sick-outs” for Jefferson County Public Schools (JCPS) students, teachers, parents and other faculty members. Teachers continued to occupy the capitol this week in an effort to protest bills they saw as an attack on public education and to tell legislators that they’ve broken trust with their unions.

Below is a comprehensive recap of all that happened this week and the status of education bills as well as some other controversial legislation discussed in the 2019 Kentucky General Assembly (KYGA19).

HB205 failed on Wednesday March 13 after one of its sponsors told members of the committee that “there wasn’t enough support for it.” The bill would have created tax credits totaling up to $25 million as an incentive for individuals and organizations to donate money to scholarship funds of private schools in Kentucky.

While there were discussions of parts of 205 being translated to House Bill 354, the Courier Journal reported that sponsor Chris McDaniel “did not forsee the private school bill being tacked onto any other legislation in the session’s final days.”

Proponents of the bill had argued that the incentive for providing more money to scholarship funds allowed disenfranchised and other disadvantaged students the opportunity to pick a school that was right for them. Opponents, a majority of teachers and every superintendent in the state, believed that the bill would funnel money directly out of public schools.

Along with the power to choose principals, HB250 will provide JCPS Superintendent Dr. Marty Pollio with an avenue to override budget and school personnel decisions made by a school’s school-based decision-making (SBDM) council. An SBDM is made up of teachers and parents but proponents of the bill believed that superintendents should make hiring decisions, have the ultimate say in who is running individual schools and make choices about budgets without interference.

As an act relating to “protection of speech at public postsecondary education institutions,” HB254 adopts set policies that ensure the protection of speech extends to students and faculty in public colleges and universities. The bipartisan legislation sets a precedent that anyone in public is still allowed access to freedoms guaranteed by the Constitution.

HB525 was this year’s major pension bill that would have restructured the board in an effort to take away teacher voice and give it to state-wide organizations. Teachers who opposed the bill rallied in Frankfort again this year in an effort to make sure that their demands are met in terms of the state’s failing pension system.

After six days of “sick-outs,” the bill failed and unless an amendment is made to a bill that has been passed, the Kentucky Teachers’ Retirement System will remain an organization that includes direct teacher and administration input.

In addition to several education-related bills this week continuing on their journey to Bevin’s desk or stalling in the House, Kentucky Department of Education Commissioner Wayne Lewis requested a list of the names of JCPS teachers who called in sick these past few weeks, cancelling classes for six full days.

In an interview with the Courier Journal, Lewis said that he wanted the names in order to “make sure state laws have been and are continuing to be upheld. State statute allows Lewis access to records of that nature in order to report misconduct back to the board.

Since Lewis’ request, the Jefferson County Teachers Association has announced that they will provide legal representation to any JCPS teacher who is reprimanded for their actions and they have already sent mass emails with legal advice to all of the members.

It is possible that school districts and the state may take action against teachers who called in sick in an effort to close school because, as previously reported by Manual RedEye, a strike by any Kentucky public employee is illegal. However, because the number of sick calls cancelling instructional days and allowing teachers to head to Frankfort, it may be hard to argue that the “sick-out” is a strike.

The gray area is already being investigated and teachers will be protected. After Lewis’ announcement, the Associated Press reported that attorney Mark Wohlander is preparing a civil rights lawsuit “for the department’s ‘unprecedented interference with [teachers’] First Amendment rights.'”

The second, HB5 prohibits any abortion if the intent is because of the child’s sex, race or disability with exceptions to medical emergencies. It will require physicians who perform an abortion to confirm intent or their medical license could be revoked.

The first, SB9 will block abortions after the detection of a fetal heartbeat with exceptions to medical emergencies. As soon as the bill passed and was on its way for signature, the Kentucky chapter of the American Civil Liberties Union announced that they are filing suit, based on constitutionality, in order to block its implementation.

Working with the Kentucky Center for School Safety, legislators wanted to create bipartisan language that will provide schools with comprehensive safety training, annual risk assessments, appointment of a school safety coordinator, promotion of at least one school resource officer to each school and extensive active shooter training.

After push-back from several grassroots organizations, Republican senators managed to pass SB150 that will allow anyone above the age of 21 to conceal “deadly weapons […] without a license in the same locations where concealed carry license holders may carry them.”

Already passed in both chambers, HB46 awaits Bevin’s signature that would require schools to display the traditional national motto of “In God We Trust” in a high-profile location in a school like a main entryway, cafeteria or gym. WFPL reported that the bill does not outline punishment for schools who do not comply, but people can file lawsuits against the school for not displaying the phrase.

Stay tuned to further reporting about this specific bill from Manual RedEye reporters.

HB387 was an act relating to public records for economic development that failed earlier this week. It would have made additional changes to what is private information including economic incentives offered by the state. It would have also blocked records requests from individuals outside of the state of Kentucky.

In an effort to keep the state’s executive branch in check, the legislature proposed SB6 this year, requiring the disclosure of “executive agency lobbyist compensation.” Organizations who hire lobbyists in the legislative sector are already required to disclose the amount they spend annually and the bill is an extension for the executive.

Of course these are not all of the policies and regulations that the KYGA19 worked toward passing this session. Continue doing research of other bills to watch as the session comes to a close by reading reports from local media like the Courier Journal, Insider Louisville, WDRB and WFPL.The legislative session ends this year on March 28 after the veto period.