The history of Saint Patrick’s Day 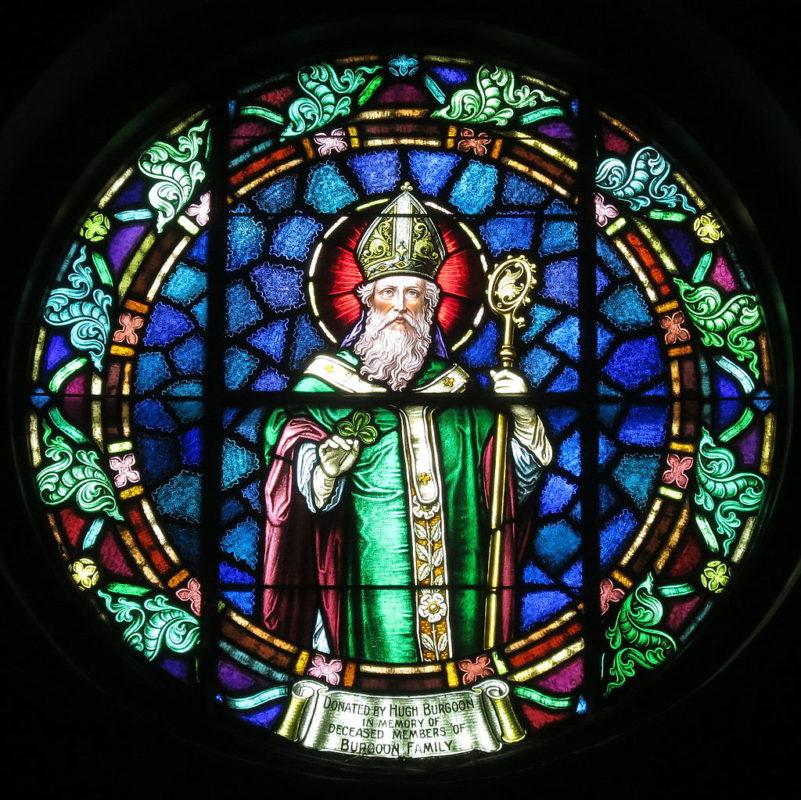 "Stained glass, Saint Patrick" by Nheyob is licensed under CC BY-SA 4.0 on Wikimedia Commons. No changes were made to the original image. Use of this photo does not indicate photographer endorsement of this article.

Saint Patrick’s Day is celebrated across the United States every year on March 17, bringing with it a lot of parties, Irish merchandise and green beer. Originally, however, this holiday was a simple feast day to honor a Christian saint, one who was not even Irish. In order to understand just how Saint Patrick’s day became such a big deal, one must first understand who Saint Patrick was, and why he was important.

Who is Saint Patrick?

Saint Patrick was probably born in Britain in the late fourth or early fifth century. Most of what we know about him comes from his Confessio, a short, spiritual autobiography that he wrote toward the end of his life.

According to this document, at the age of 16, he was captured by raiders and sold into slavery in Ireland. He came to heavily rely on his Christian faith while there. One night, he dreamed that a ship was ready to help him escape, so he fled from his master and found a ship that took him back to his family in Britain.

After he had been home for a while, Patrick began to have dreams and visions which called him to go back to Ireland and preach. While he did doubt his abilities because of his incomplete education, he nevertheless returned to Ireland, obtained the protection of local kings and began to preach. He went to west and north Ireland, where the people had never encountered Christianity, and converted many. He was careful to be respectful of non-Christians, and he continued to preach despite threats to his life.

Patrick had a major influence on the people of Ireland, and there are many legends about his time there. In one legend, he drove all the snakes out of Ireland and into the sea. In another, he used a shamrock to explain the Holy Trinity to a nonbeliever.

Patrick is now canonized as the patron Saint of Ireland, engineers and Nigeria in the Catholic, Anglican and Eastern Orthodox churches.

History of the celebration

In 1631, the Church established a feast day to honor Saint Patrick on March 17. This day is during Lent, which is a time when certain Christian denominations have members pray and partake in fasting. Some Christians therefore saw Saint Patrick’s Day as a sort of “break” from fasting, and began to hold elaborate parties to celebrate the occasion. As Patrick is the patron saint of Ireland, Irish immigrants in America also saw this day as an opportunity to celebrate their culture. Boston held the first Saint Patrick’s Day parade in 1737, and New York City held its first parade in 1762.

Traditionally, Saint Patrick was associated with the color blue, but that began to change in 1798. That year, a group of rebels in Ireland attempted to stage a revolution against British control. The Irish rebels chose to wear green during the short war, which led to the color’s association with both the country and its patron saint.

Today, Saint Patrick’s Day is a mostly secular tradition in the United States, boasting the aesthetics of Irish culture and food. Many cities across the country hold parades to celebrate, including one held by the Ancient Order of Hibernians in Louisville. In one of the most famous examples of Saint Patrick’s Day festivities, the city of Chicago colors its river green every year.

Despite all the fun in America, however, Saint Patrick’s Day is a less festive experience in Ireland. Traditionally, Irish people go to Church in the morning on Saint Patrick’s Day and pray for missionaries. Later in the day, they will drink and dance. The Irish rarely partake in any of the more exciting Saint Patrick’s Day traditions, and when they do, it’s usually only done as a tourist attraction.

Featured image citation: “Stained glass, Saint Patrick” by Nheyob is licensed under CC BY-SA 4.0 on Wikimedia Commons. No changes were made to the original image. Use of this photo does not indicate photographer endorsement of this article.