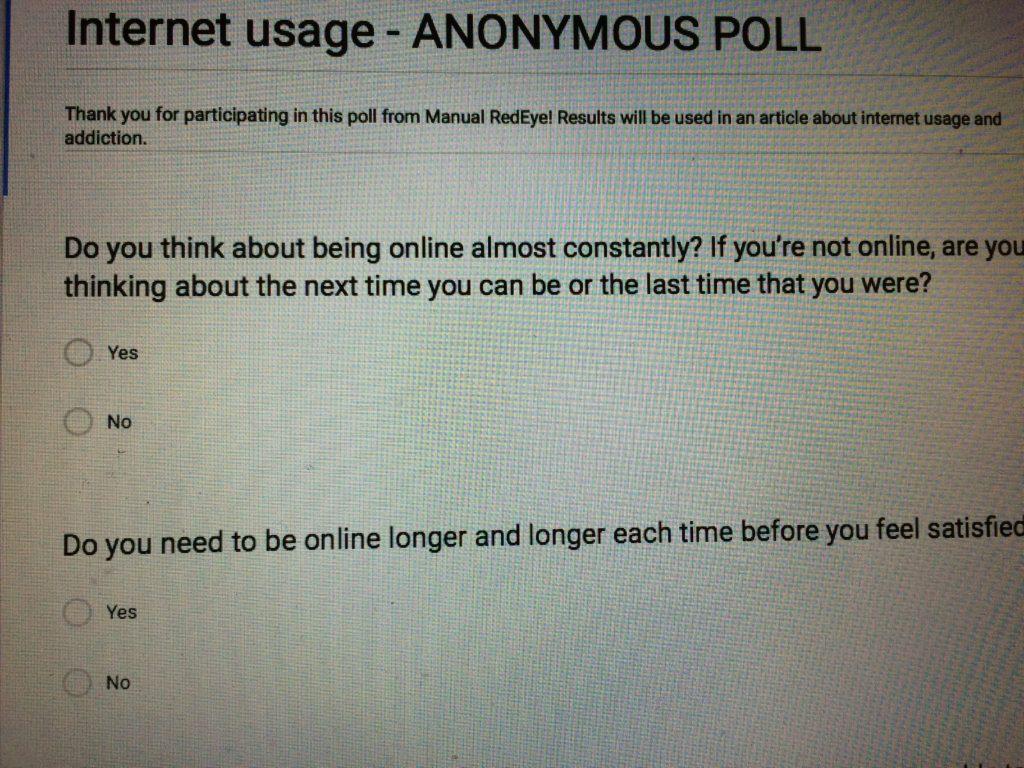 The results of a survey of Manual students on their internet usage have implications reaching further than the school. The results show that over half the participants have tried to control, reduce, or stop their internet use, but have been unable to do so successfully. 87% of participants lose track of time when using the internet, and 47.8% of participants sometimes lie to important people in their lives about the amount of time they spend or the types of activities they participate in on the Internet.

Mental Health America states that “There is no one definition for internet addiction; however, it is generally agreed upon that people who are addicted to the Internet […] often experience negative emotions or withdrawal symptoms when their Internet access is restricted.” That describes almost a quarter of Manual survey participants, while “use of the Internet causes strain on relationships with family and friends,” another identifier of internet addiction, describes over 30% of the survey participants.

Five Manual students weighed in with their thoughts on internet usage and addiction.

“I probably use [the internet] for homework and social media the most,” Yeji Chung (12, MST) said. “It kinda hinders me from being as productive as I can be, like I’ll get bored and end up on YouTube for 20 minutes without realizing.”

Ganga Adhikari (12, MST) agreed. “When I get my daily report, I am always surprised, but I am working on reducing [my internet usage],” Adhikari said.

“I would say the Internet, and social media or digital addiction is very serious. I know many people who are addicted to Snapchat,” Lilly Gonzalez (11, MST) said. Silas Elmore (12, YPAS) agreed.

“The whole world overshares on the internet now,” Elmore said.

Sydney Finley (12, HSU) also felt that internet addiction is becoming a serious problem. “I’m always seeing people on their phones during class, during lunch, and just in general. It’s becoming more and more difficult for not only young people but older people as well to put their phones down,” Finley said.

Elmore takes a slightly different view of things. “Our lives are hooked into [the internet], there’s no avoiding it,” he said.

Adhikari believes that social media, while overused, isn’t as bad as other forms of internet addiction due to its practical use of communication. “Social media is […] an addiction but it can also be used for good things so it’s not as bad as gaming,” Adhikari said.

“I don’t think [internet addiction has] become some sort of an official problem yet, but I think it’ll be bound to happen as technology becomes even more widespread and used in more settings,” Chung said. However Elmore believes that integration of the internet into everyday life has already happened.

“There’s new smart-fridges that you can literally get onto Twitter from and shoes that sync with your phone,” Elmore said, adding, “If you want us to stop ignoring our real lives and focusing on the virtual, stop trying to sell everybody this idea that forcing the internet into everything makes it so much better.”

Eventually Chung discovered her own method to reduce distractions. “I actually found that turning on white noise on my computer really helps,” Chung said. “It helps me stay focused for longer periods of time.”

Elmore made a change that targeted the overuse of internet in his own life, which was social media. “I deleted my old instagram and made a new one where I only let 30 or so people follow me and I only follow 100 or so,” Elmore said. Similarly, Gonzalez’s friends often can’t reach her in the evenings due to her commitment to avoiding distractions.

“I put my phone away when I’m working, with the ringer off. I’ll only check it between assignments, if at all,” Gonzalez said.

Here are some additional tips from the experts at Mental Health America to reduce unnecessary internet usage.

To cut down on internet usage it is best to take breaks. Mental Health America recommends a 15 minute break for every 45 minutes of Internet use.

Instead of playing video games during all free time, fill some time with physical activities that are intense or require a lot of concentration.

Write down a list of all the enjoyable activities that don’t require using the internet and do one of those instead whenever possible.