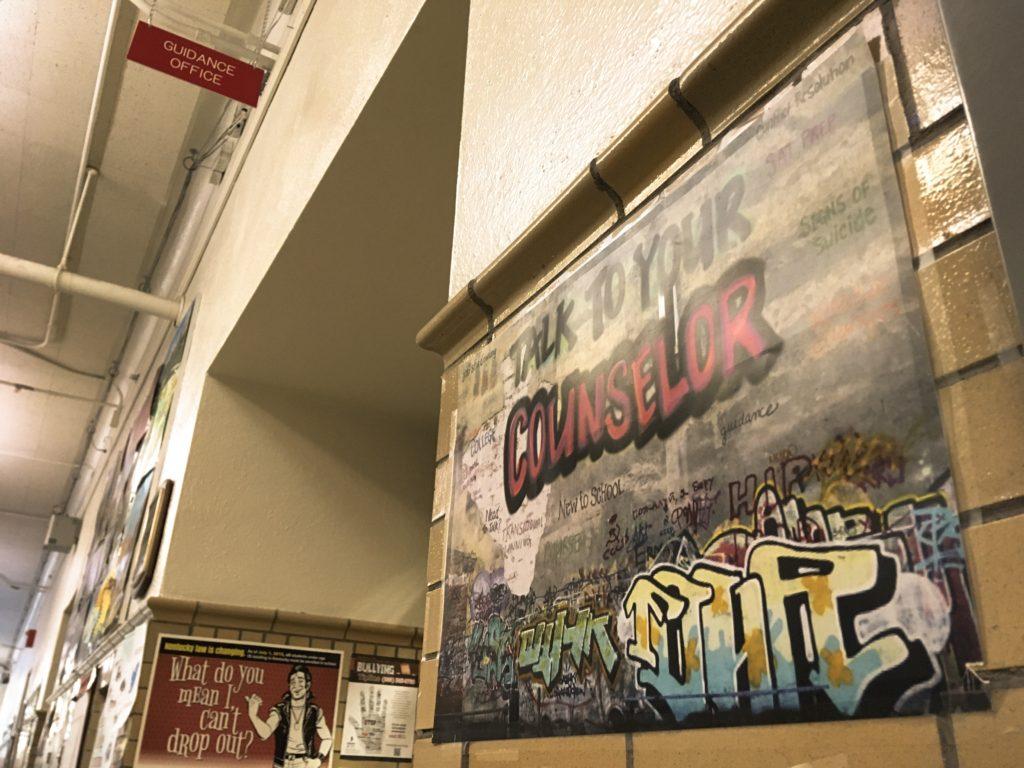 Information and signs are posted outside the guidance counselors' office to encourage students to speak witht heir counselor. Photo courtesy of Akhila Nadimpalli

Bullying and suicide rates have been on the rise in the last decade, with some states’ rates jumping 30 to 50 percent over the course of two years. The disturbing reality is that teens across the country are growing more vulnerable to suicide being their only answer or escape, a problem Jefferson County Public Schools (JCPS) is seeing more and more of lately.

This year, eight students in JCPS have killed themselves, almost three times as many students who killed themselves last year, an alarming rate that has caused concern throughout the district. This past Thursday, March 21, JCPS held a summit that discussed the importance of keeping conversations about bullying and suicide open between students and adults and how the district handles these issues.

At the beginning of the year, each school is required to show students a presentation on the signs of bullying, what a student should do if they see a student bullying, how to help victims of bullying and what it could lead to. For suicide, the presentation discusses signs of suicide, how to approach somebody if they think they could be at risk and more on how to get students to understand what somebody could be going through.

The presentation students are given has changed throughout the years, but the problem isn’t in the message. Suicide and bullying awareness are serious problems that the country is seeing a rise in among its youth, but the way it’s presented to students is not proving to be effective and needs to be changed.

In this year’s presentation, students watched videos including one from Buzzfeed about a man who attempted suicide by jumping off the Golden Gate Bridge and the “1-800-273-8255” music video, a rap song about suicide awareness and prevention. The problem with this new updated and modern version of the presentation is that it’s not taken seriously by students.

“If someone is suicidal and they watch Logic’s music video, it doesn’t change anything. It seems like they’re approaching the problem without knowing what the actual problem is,” Roscoe Lindsay-Bruns (10, VA) said.

Students are aware of the issue among their peers and the presentation given. It’s not that they don’t care about the issue, in fact, many feel strong about the issue and want to change it to help the message spread.

“I think that the way the set up they have now is not what is needed. I think that teenagers tend to cope with things by making them a joke, and making us watch a music video and going through a bunch of movies that have really bad acting, that puts us in an environment where joking about it is the only option,” Claire Rooney (10, J&C) said.

Joking is common during these presentations due to the dramatic and unrealistic renditions of bullying and depressed teens that are at risk of suicide. The videos shown are both dramatic and boring, causing students to sleep, talk or joke about them, meaning their messages get lost.

If JCPS wants to work on decreasing the suicide rates, they need to understand suicide and bullying is not something that can be talked about once and will go away, a fact they touched base on in the summit this past Thursday. At the summit, the district announced it will try a new tactic to handle the crisis, which will include keeping an open conversation about the subjects with students and adults, something students hope will work better than the current methods.

“If I were to change something it would be to stress to the students to talk to people,” Miranda Moore (9, VA) said.

A big problem with the rising suicide rates is the lack of communication between adults and students who are going through difficult times. More and more, kids are killing themselves without letting anyone know something is wrong. While parents and adults are aware of the problems of bullying in schools, they don’t understand how drastic it can affect a child’s life, and without an ongoing conversation it can feel hard for them to bring it up.

A “Talk to your Counselor” sign that hangs outside the guidance office. It contains multiple topics students can talk to their counselor including suicide. Picture by Emma “E.P. Presnell”

Allison Tu, a Manual senior and founder of StAMINA, a student organization that advocates for mental health awareness, and was able to attend the summit. She hopes the new open conversation will encourage more students to take it amongst themselves to keep an open conversation about these serious issues with the students of the school, something that would help with the keeping the rates of suicide and bullying down.

With JCPS’s new tactics, the hope is to create an environment where students can, at all times, feel like they have someone to turn to in. Starting next year, middle and high schools will have a mental health professional in addition to staff training which will help students more in opening up.

As for whether these new plans of action will work, only time will tell. Students seem to be more optimistic about these changes and hope it will bring a positive change to the school environment and stop the numbers from raising.

“I honestly don’t know how it will go. I hope this leads to an improvement and a decrease in the numbers, but it’s hard to say. Suicide is a tough issue but it’s nice to know they’re trying,” Miranda said.