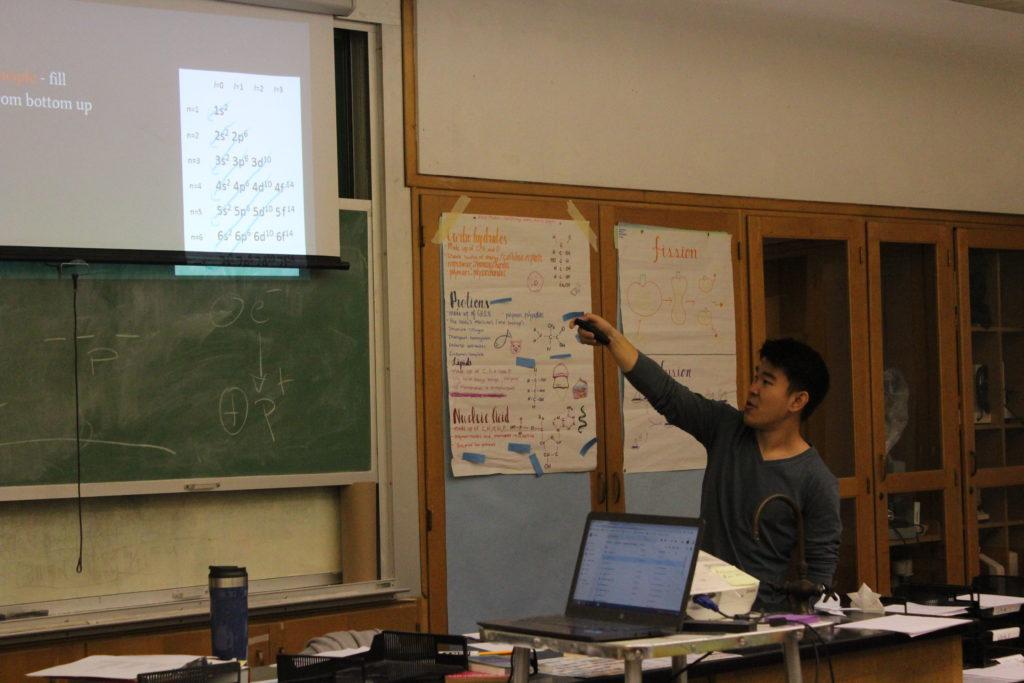 This piece was submitted by Claire Rooney (10, J&C).

After his first year of teaching, Mr. Dennis Kuo, a Biology and Chemistry teacher here at Manual, has finished up the year with lots of hope and experience for next year’s courses to keep his students informed and fluent in the language of science.

Kuo has been concurrently taking teaching classes, so his skills have been getting increasingly better over the school year, according to his students.

Francesca Campisano (10, J+C) takes Advanced Chemistry with Mr. Kuo, and thinks he’s really smart, but had trouble expressing difficult concepts in the beginning of the year.

“I feel like he’s gotten much better at conveying ideas to us and he’s gotten more confident in his teaching,” Campisano said.

One strategy Mr. Kuo has developed is indulging in questions from his students whenever possible, even if his class gets a little off the rails in their discussion.

“They can tell I’m excited and so I think they think I’m ridiculous sometimes,” Kuo said, “I really like dolphins. I think they’re super interesting animals, so if anyone says anything about dolphins, I will go off on a tangent and talk about dolphins for a while.”

Meredith Thomas (10, YPAS) has really benefited from Mr. Kuo’s class and his question-answer strategy, and even said that he was her favorite teacher.

“He is very reassuring that I’m not gonna fail in his class,” Thomas said, “He’s like ‘what can I do to help you?’ I find that very admirable for a teacher.”

Thomas also described how Mr. Kuo’s classroom is very student based, and he tries to always help and relate to students.

His background is in research, be he also attended a liberal arts colleges, so he feels that he can help connect the ideas in science to music or other types of art.

“I think that’s something that I really like doing, and it really works with the magnets here,” Kuo said.

He says he tries to bond with his students by sharing experiences, hanging out, and getting to know them a little better.

Mr. Kuo sponsors the Asian Social Community  and is a coach for the Ultimate team at Manual, where he meets and connects with his students outside of the classroom.

“I’ve been coaching for many years,” Kuo said, “That’s one of my favorite ways to bond with people.”

Overall, Mr. Kuo has had a lot of struggles over the year, but has been growing and learning with the students to make next year even better.

He hopes to stay in teaching for the next ten years or so, and plans to spend his summer break changing his curriculum and planning out the next year.

“I really appreciate the community that’s here,” Kuo said, “Everyone’s been super helpful and I could not be in a better place.”