Homeless displaced for Derby, stake out at Barnstable Brown Gala 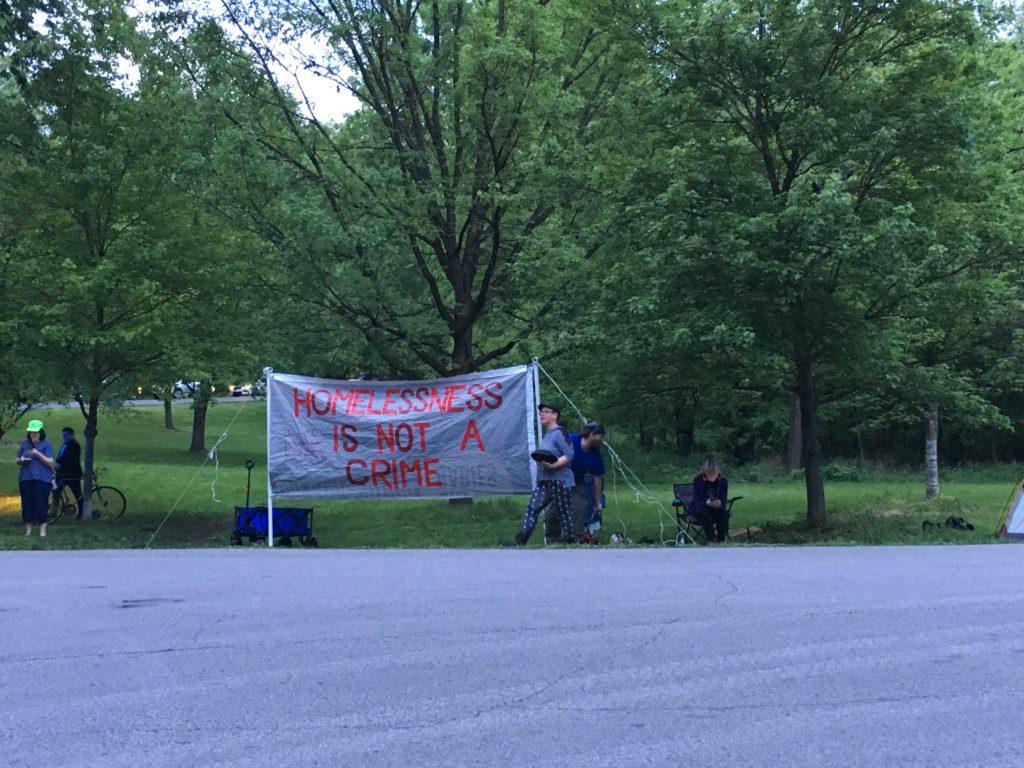 Protestors sit in folding chairs and listen to music, ready to shout at attendees for the evening. Photo by Piper Hansen.

Homeless protestors stood under a “HOMELESSNESS IS NOT A CRIME” sign next to tents, folding chairs and coolers on the corner of Spring Drive and Cherokee Road while a line of Barnstable Brown Gala attendees waited to get into the party last night.

Protestors sit in folding chairs and listen to music, ready to shout at attendees for the evening. Photo by Piper Hansen.

Just an intersection away from the line to the diabetes charity event, a woman shouted past police officers directing traffic.

“They’ve been trying to cure diabetes for years,” she said. “Put your money toward people who have nothing.”

The woman became increasingly frustrated as men who were waiting in line ran to the wooded area behind her to relieve themselves and police officers “turned a blind eye,” she said, to their public urination.

“I would have been arrested for something like that,” she said.

Spectators hoping to catch a glimpse of one of this year’s celebrity attendees shared that the woman was planning on camping out until the party was over.

She continued to make references to the clearing of several homeless camps around Louisville in previous weeks that displaced her and attempted to beautify the city in preparation for hundreds of thousands of visitors for the Kentucky Derby.

At the beginning of April, the final stages of clearing the homeless camp on Jefferson and Jackson streets, better known as Tent City by Louisville residents, was taking place.

Due to the warming spring weather and a new low-barrier shelter, the clean-up would allow those camping in Tent City to take advantage of the new services provided for the homeless.

While the city’s director of Resilience and Community Services told the Courier Journal that the timing of the clean-up had nothing to do with Derby, homeless advocacy and aid groups recognized that the beautification process was related to Derby.

According to the last homeless census, almost 6,700 Jefferson County residents are homeless and shelters are only so big, Louisville is out of money and there is no perfect solution to the problem.