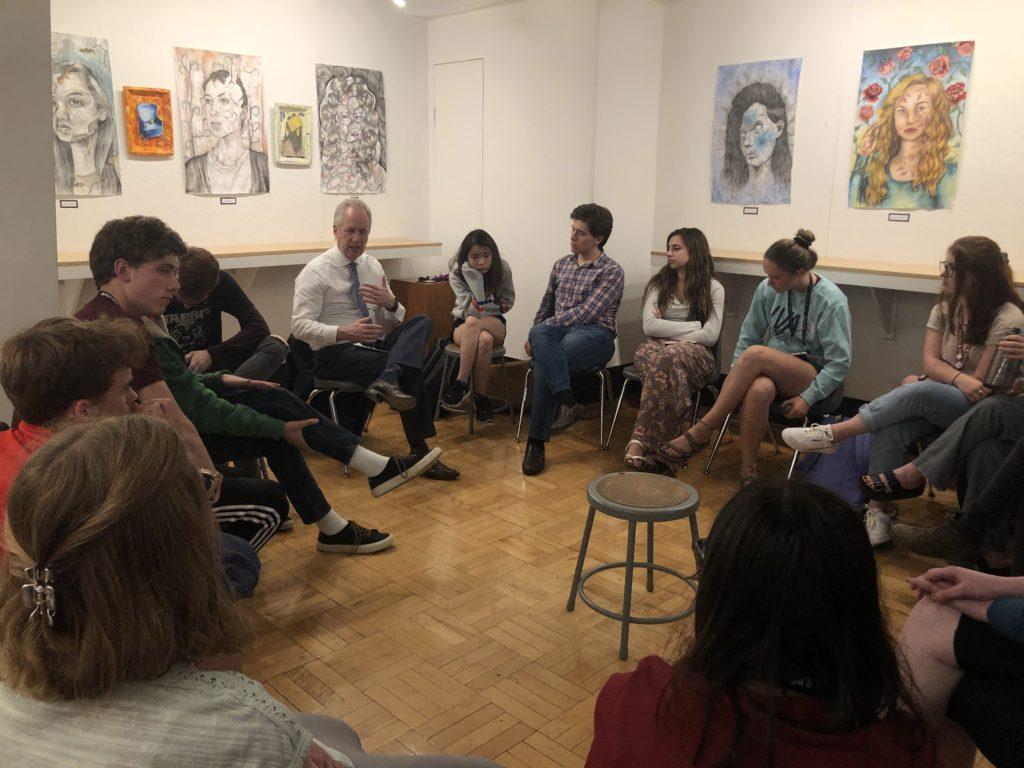 This piece was submitted by Marshall Gault (10, J&C).

Mayor Greg Fischer visited duPont Manual’s Young Democrats on April 30 from 2:30 to 3:30 p.m. to discuss with students about the problems facing Louisville and the country.

Fischer began by introducing himself and explaining what he does for the city.

“Last year was a horrible year for gun violence. I’m sure you all are concerned about the issue especially because it affects you all. What you all did last year with the whole movement and with the walkouts was really inspiring,” Fischer said.

After Fischer spoke with the students about the local issues that are the most prevalent in the community, the students asked him questions about issues they were interested in.

“I’m really concerned about the differences in pay in Louisville. I think everyone working the same job should be paid equally and it’s disgusting that people can be paid more than others,” Kate Ross (10, MST) said.

“A lot of companies like Amazon offer all these jobs, but what happens is the U.S. doesn’t tax these companies. Instead of actually taxing them the U.S. and Kentucky gives them breaks,” Fatima Talpur (9, HSU) said.

Fischer closed the conversation by sharing some of the projects he has campaigned for including ‘Lean Into Louisville’ which is an “unprecedented series of activities, art exhibits, conversations and presentations to explore and confront the history of and legacy of all forms of discrimination and inequality.”

Young Democrats occasionally has guest speakers come in to talk with students about local and global politics.

“We have local officials come in and just talk with us. We ask them questions which helps make the discussion feel more real,” Forest Clevenger (12, HSU) said.