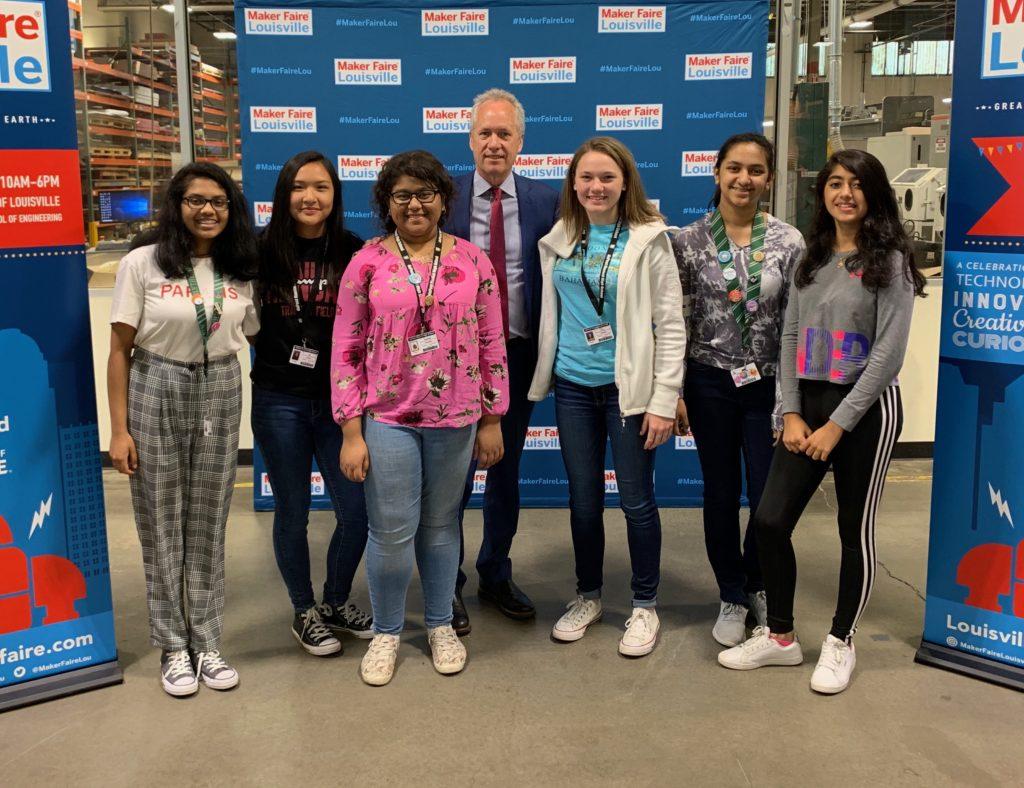 Students in Ms. McCall’s Engineering 1 class attended the announcement of Maker Faire Louisville, an opportunity for students to showcase experiments and projects to the public, which will take place this September 28th and 29th at the University of Louisville’s FirstBuild engineering building.

Freshman students at Manual brought their engineering class projects to showcase to the organizers of the fair in hopes of getting a slot at the Maker Faire in the fall.

Manual Freshman pose with their projects they made in Ms. McCall’s engineering class. Photo by Payton Carns.

“Engineering 1 is foundation class where students are exposed to a variety of topics like engineering and design process, simple machines, and things that would be foundational for engineering projects,” Ms. McCall said. “We do a lot of projects in class so I picked the students based on the top projects we’ve done in class and their general interest in engineering.”

Other JCPS high schools like Fern Creek, Doss and Jtown attended to show their projects.

The Maker Faire featured an official announcement by organizers of the fair as well as JCPS Superintendent Marty Polio, President of the University of Louisville Neeli Bendapudi, and Louisville Mayor Greg Fischer.

The announcement is made by Dr. Neeli Bendapudi, the president of the University of Louisville. pic.twitter.com/1kGhpjX8eI

Bendaputi gave the first announcement of the dates and event of the Louisville Maker Faire, and then passed the mic to Superintendent Polio, who thanked the Maker Faire for giving great opportunity to the students of JCPS.

“Our kids in JCPS are getting an amazing chance to be innovators,” Polio said. “I have been blown away by some of the things I have seen our students do over the course of the past year and how it’s impacting the community in great ways.”

Mayor Greg Fischer also spoke on the Maker Faire and the positive light it sheds on Louisville as a city.

"Innovation is a great brand to have," says Mayor Greg Fischer. "…It is my honor to open the call for makers." pic.twitter.com/PXshd7HCSJ

“It’s an innovation takeover of Louisville that really forces the world to look at what is happening in our city. Innovation is an incredible brand to have,” said Mayor Fischer.

The event preceding the official announcement featured technological booths, including virtual reality experiences, kaleidoscopes, and other inventions to get people excited for the upcoming Maker Faire.

The Virtual Reality experience was one of the more popular events among the students.

Manual Freshman tries out the virtual reality game made by the GEA IT department. Photo by Payton Carns.

Jack Manzella, who works in IT innovation for the GEA cloud team, came to the fair to showcase the virtual reality game he developed in the GEA IT organization.

“It’s a great way for us to explore new technology while kind of having fun with it a little bit,” said Manzella. “We’re interested in using virtual reality for different projects and thought it would be cool to turn it into an actual game.”

The actual Maker Faire in Louisville will take place September 28th and 29th at FirstBuild.

It is supposed to be bigger than any Maker Faire in Louisville with up to 10,000 people attending.

To find more information on the it and how to enter visit their website.

Manual’s engineering students are hopeful to make it to this year’s Louisville Maker Faire.