OPINION: Manual students should start thinking about their posture 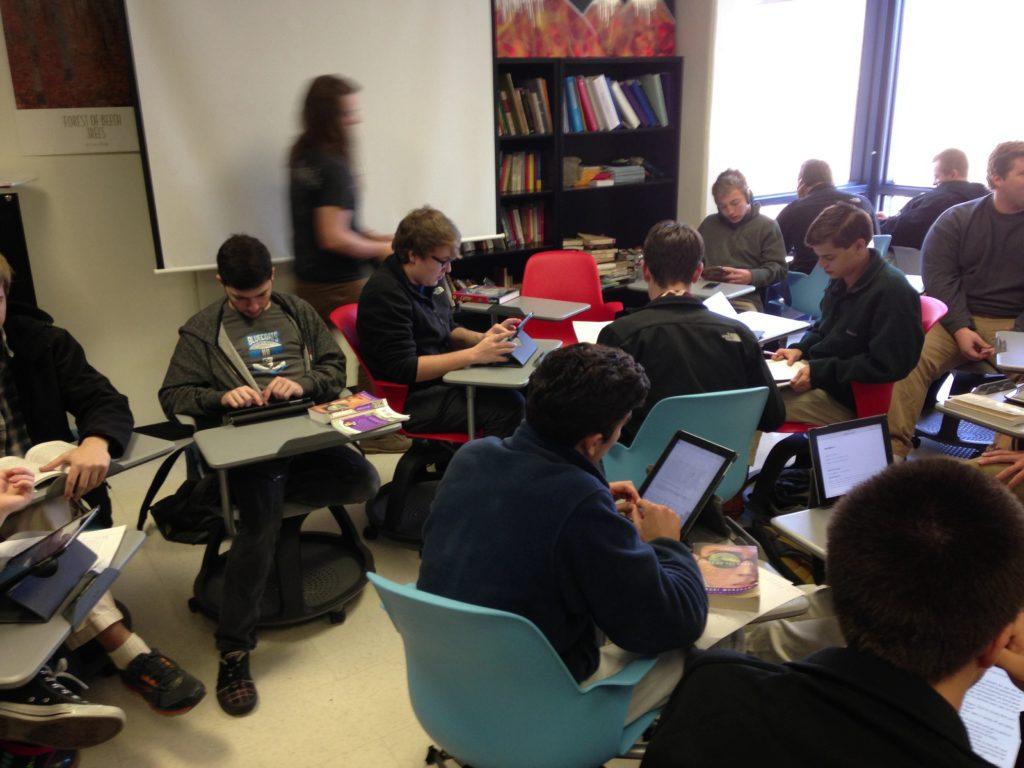 High school students and Manual students in particular are often stressed about a wide array of issues ranging from their score on the ACT, to who their prom date will be. One issue, however, often gets pushed to the side in the minds of students despite its potentially threatening implications. Students from elementary school to high school are not taught to foster healthy sitting behaviors, and as a consequence, an increasing number of students have developed unhealthy posture habits by the time they are in high school. The increasing prevalence of cell phones and personal computers has accelerated this trend. Today, high school students frequently partake in a number of behaviors that have the potential to cause major posture problems or back pain later on in their lives. How can you avoid these problems? And how can you fix them if you already have them?

At the beginning of the twentieth century, the idea of requiring every child to attend school was a very controversial topic. Many who were against mandatory schooling claimed that forcing developing children to sit in desks for six hour a day was unhealthy and unnatural. In order to combat this complaint, schools developed posture classes in order to please those who worried about the posture and health of the children. As a result, during the early twentieth century, every child knew the correct way to sit in order to minimize the harmful effects of sitting all day long. Additionally, desks were examined and modified to fit the size of the child and chairs were molded to better fit the shape of the child’s back.

As mandatory schooling became less and less of an alien idea, the worries about posture in school for the most part also slackened. Parents no longer questioned whether schooling was bad for the health of their students because they hadn’t seen it affect any other students. As the century wore on, more pressing topics came to the forefront of people’s minds and posture education declined until it was practically extinct.

Today, very few students are ever taught the most practical way to sit to prevent chronic back pain in the future. Children are often told to ‘sit up straight,’ but having good posture is about more than just that. Today, posture is not a large concern in schools despite the ever present need for posture education. To make matters worse, cell phones and laptops heavily encourage bad posture habits, and heavy backpacks definitely don’t help. If students continue to practice bad sitting habits, they are at risk of having chronic back pain later on in life, and a number of other consequences.

“Photo” by Technolibrary on Flickr is licensed under CC BY 2.0. No changes were made to the original image. Use of the image does not indicate photographer endorsement of the article. For the full license, click here.

What affects a your posture?

There are a variety of behaviors that can hurt one’s posture. A lot of them have become second nature to most high schoolers due to the nature of the work that is required in high school. Below are some of the most common causes of bad posture in high schoolers.

As cell phones and laptops have become more popular, people bending over to look at them has also become a frequent sight. According to The Washington Post, when you lean over your phone, the weight that your neck must support can increase up to six time the amount it must support when your head is straight. This phenomenon experts have dubbed text-neck can lead to wear and tear on the spine and neck which can lead to pain in the future. Furthermore, a similar phenomenon can be observed with laptops. Many people must tilt their heads down in order to see the screen of a laptop which can significantly contribute to text-neck.

The way a desk or chair is designed can also impact a student’s posture. If a chair is too high and your feet can not reach the floor, your dangling feet can increase the strain on your lower back. Of course, very few high school students have this problem. More likely, the chair is too low, and as a consequence, your knees are higher than the seat of the chair. This is potentially dangerous, because that increases the strain on your tailbone. Experts recommend sitting with your knees at a 90 degree angle, but in school, all of the chairs are uniform, so it can be difficult to truly find chairs that fit every student.

Then there is the issue of the back of the chair. Some chairs are adjusted to fit the curve of your back, but that can be potentially harmful for students who are to big or too small for the chairs. Additionally, the height of the desk is a risk factor. A desk that is too short can cause slouching, and one that is too tall can increase strain on your shoulders. Desks and chairs are too uniform to fit the needs of every student. The only solution present is to introduce adjustable desks and chairs, but those can be expensive. School ergonomics can be difficult, so students have to make a conscious effort to focus on their posture.

Sitting still for a long time is never a good thing. School certainly doesn’t do any favors for student posture in that regard. One thing that can help, however is exercise. When at home, make it an effort to get up and stretch. Additionally, healthy exercise habits in general make it easier to keep your posture healthy. Having strong core and back muscles can make it easier to sit up straight by stabilizing the lower torso. Additionally, working on balance and stability can help your body stay aligned.

“Packin’ for school” by Woodleywonderworks on Flickr is licensed under CC BY 2.0. No changes were made to the original image. Use of the image does not indicate photographer endorsement of the article. For the full license, click here.

Heavy backpacks are a major issue when it comes to posture, especially in high school. The American Academy of Pediatrics recommend that students shouldn’t carry loads heavier than 10 or 20 percent of their body weight, and that the backpack straps should be tightened so that the bottom of the backpack is at the student’s waist. Despite this, textbooks and notebooks in high school and middle school can contribute to exceedingly heavy book bags. According to The New York Times, the average weight of a sixth-grader’s backpack is 18.4 pounds. Additionally, they reported that backpack weight can be a strong contributor to lower back pain, especially in smaller students, or in students that wear ill-fitting backpacks.

What are some consequences of having bad posture?

Changing the way that you sit and act can seem like a lot of work for no gain, but bad posture has a plethora of harmful effects that could plague you later on in life if you don’t act now. The most obvious effect of bad posture that could hurt you later on is chronic back pain. According to the National Institute of Neurological Disorders and Stroke (NINDS), 80 percent of adults experience back pain at some point in their lives. NINDS cites poor posture as one of the causes of back pain. Poor posture can result in muscle deterioration and imbalance in your back, which can put you at a risk for more frequent, or earlier back pain than someone with correct posture. Furthermore, one study linked improved posture with a positive mood shift in patients with depressive symptoms, and experts suggest that poor posture may be linked with fatigue. When you have bad posture, your back muscles have to work harder to keep your body upright, and therefore, your body runs out of energy faster than it would if you had correct posture.

Posture has much more of an effect on you than you may realize. It affects many aspects of your life, and could hurt you for long to come if you don’t put in any effort to fix it now. High school is full of factors that may put your posture at risk. If you pay attention to your posture now, it could save you a lot of pain and money in the future.

“Photo” by Technolibrary on Flickr is licensed under CC BY 2.0. No changes were made to the original image. Use of the image does not indicate photographer endorsement of the article. For the full license, click here.