Lena Kaziska rises to the top 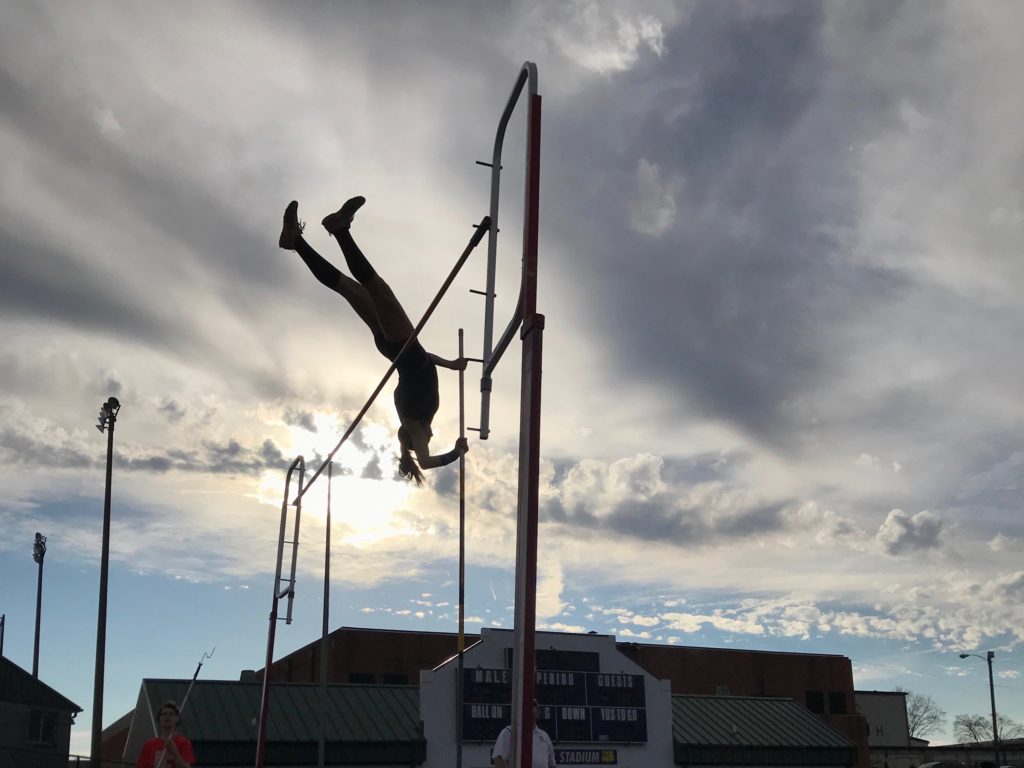 Lena Kaziska (10, MST) clears a 10'6" bar in a track meet at Male, winning the girl's pole vault competition for the meet. Photo provided by Kayla Wendler.

Lena Kaziska (10, MST) clears a bar at 10’6″ in a track meet at Male, winning the girl’s pole vault competition for the meet.

Lena re-adjusted her grip on the pole as she walked up to her mark. Squaring her feet, she lifted the end of the pole up above her head. She broke out into a run. One, two, three, four, five. All the way up to twelve. Guiding the pole into the box as she kicks off the ground, her legs went up above her head. She rose up and up off the ground, finally rising above and over the bar and falling onto the mat on the other side.

A new personal record of 11 feet and 6 inches; she had finally made it into double digits. She allowed herself to lay there for a second, filled with pride, before picking herself up off the mat, grabbing her pole and walking back to her bag. She smiled and gave a thumbs up to her friends watching her, as she prepared herself for the next height.

Lena Kaziska is the five-foot-eight-inch sophomore who can pole vault more twice her height. She holds the school record for girl’s pole vault at duPont Manual High School.

“We haven’t had that many pole-vaulters, but it’s still really cool to think that my name will be in the school records,” she said.

Lena is a two time regional champion and is ranked second in the state going into 3A division state meet.

During her freshman year track season, Lena and her friend Anna were approached by a coach, who wanted to see if they were interested in trying pole vault.

“I kind of had good background for it, I had done gymnastics up until fifth grade,” she said. In addition to gymnastics, Lena has trained in contortionism and hand-balancing.

All of her success does not come without hard work. In addition to her workouts, Lena goes to a special gym, Kentucky Elite Athletics, twice a week to train—doing drills, run-throughs, and jumps.

“We have some of the best pole vaulters in the state training here, and it’s a little intimidating, but also really motivating,” Lena said.

Lena leaned her pole against the wall and sat down on the crash mat next to the runway.

“Ugh, my blister broke open again,” she said to Anna.

“That’s probably because you’re putting so much chalk on your hands, it’s drying them out,” said Anna.

“But they break even if I don’t use chalk,” Lena said. The discussion continued up until it is Lena’s turn to go. Lena lines her feet up to her mark and stares down the runway. It is like a switch has been flipped. Her eyes are focused and her movements are controlled as she runs and vaults.

She gets up and watches the replay of her vault as her coach points out that her left foot came forward a little too quickly during her jump. She files this information away for next time and then walks back to the end of the line, and continuing her conversation with Anna.

“Lena really puts in an effort while she’s here. She’ll talk and joke with her friends during breaks, but when it’s her turn she gives it one hundred percent.” said Becky, one of the two coaches that work at the gym.

The frequent training comes at a cost however. The time spent training means she has less time for other stuff such as school work. Lena is in MST—the Math Science and Technology magnet at Manual—and that means that she is given a lot of homework.

“It’s crazy, I don’t know how I keep up. It’s really stressful, but I make it through,” she says.

Her mom has a bit of a different view on things. “She is always very stressed, and I don’t think that is very good for her,” her mom says, “but she loves pole vaulting so much, and I couldn’t imagine trying to limit it or take it away from her. So as long as she gets what she needs done, I leave her alone.”

On Thursday afternoon at four o’clock, Lena and Anna walk out of Manual to where Lena’s mom is parked. They place their bags in the trunk and climb in. It is a long drive from the school to the facility—nearly 45 minutes with no traffic. Lena rides shotgun, plugging her phone into the car’s aux cord, while Anna sits in the back, starting on a homework packet from her Spanish class. Selecting a Spotify playlist made up of indie rock bands with varying degrees of notoriety, Lena leans back against the headrest and closes her eyes. She is asleep before the car even gets on the interstate.

“I still get to see everybody and hang out, but sometimes I feel a little separated. My friends are super cool about it though, and we pick back up like I had been there the whole time,” Lena says.

Lena walks through the door of Kentucky Elite Athletics and sets her stuff down on one of the church-pew-like benches in the back. She’s a little early, but that’s normal. She walks over to a small kitchen area and grabs a granola bar out of a basket on the counter and a water bottle out of the fridge, both provided for free. When five o’clock comes, her and the other kids there gather from their various spaces around the facility and start their warm-up. It’s time for them to get to work.