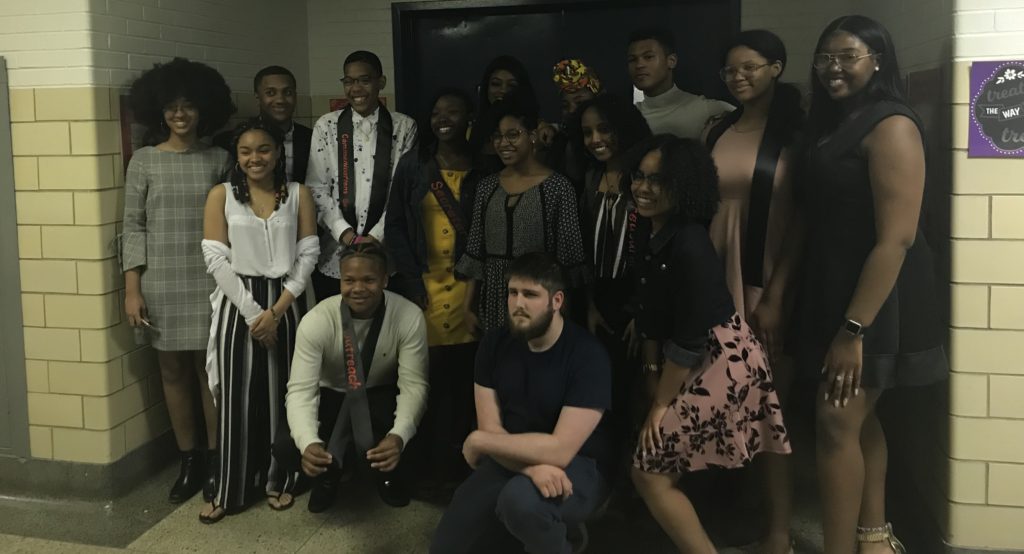 This piece was submitted by Annie Whaley (10, J&C).

The duPont Manual Black Student Union held their annual Induction Ceremony to welcome members and announce the new BSU board on May 10th at 6:30 pm.

Twenty two people came to the ceremony ages ranging from six to eighty in support of the first Black Student Union in JCPS and their accomplishments this year.

As more people came, the designated snack table was piled high with lemonade, cupcakes, and homemade food that created a warm and welcoming environment.

The current co-president, Kyra Welch (12, HSU), presented a powerpoint of the accomplishments of BSU this year including the school dance Project Ram X and the successful sit ins and protests earlier this year.

During the Induction Ceremony there was also a senior send off of the board members that are graduating this year who were surprised with framed pictures of the first ever BSU dance.

Reese looked ecstatic as she was given a big sash with a large bedazzled “PRESIDENT” printed onto the side.

Reese has wanted to be the president of BSU since she was a freshman and she is ecxited to see her vision for the club become a reality.

“When I found out officially that I was president I thought to myself “finally”. I loved working with other people and helping them meet their vision but it’s so nice when you have a certain vision you want to display it’s like your baby is coming to life,” Reese said.

She has already begun preparing for next year with scheduled meeting topics like colorism, racism in sports, and how to build black wealth.

Another goal of her’s for BSU is it get more speakers from the community into the meetings and get  BSU members out into the community trying to tackle issues they feel are important.

This meeting was more than meeting the new board and enjoying good food, it was a chance for the seniors to say goodbye to the club that shaped who they’ve become over the last four years at Manual.

Black students only make up about 13 percent of Manual’s student population so for many BSU members, they are sometimes the only black face in their class.

That feeling of being other is isolating, but the BSU offers a second family for these students, “As soon as we joined the club, we sprung. We all became proud about our blackness and our strength,” Welch said.

The inclusion of the BSU allowed for black students at Manual to feel less alone and more comfortable in their skin. It gave them role models and examples of confidence and people owning their “blackness”.

“What I was always missing was a community. Sometimes I didn’t even want to be black because I didn’t know what it was,” Sean Waddell (12, HSU) said recounting his struggle with identity growing up in a predominantly white environment.

Manual’s Black Student Union has given students of color that community to gain knowledge, self-confidence and, most importantly, a voice.