Returning students will notice a lot of new things at Manual this year. Here are some of the most notable changes:

Many hallways and classrooms in the building will now have drop ceilings covering up older wiring and pipes as well as parts of the new heating, ventilation and air conditioning (HVAC) system Manual installed over the summer. 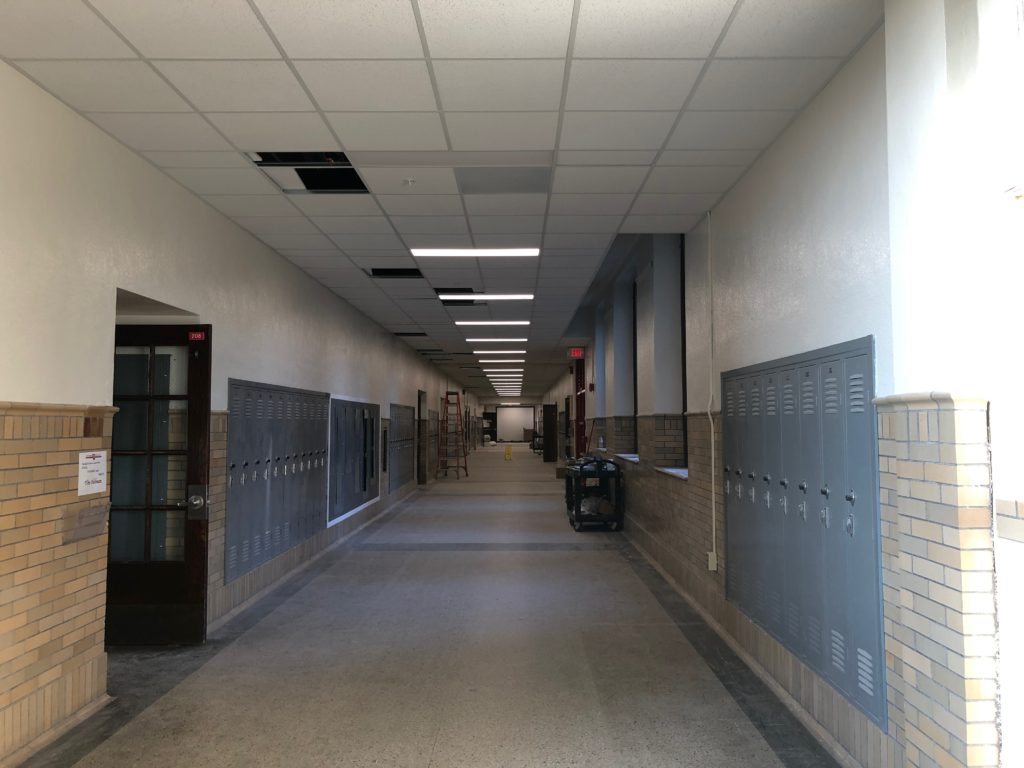 “One of the biggest changes is the ceilings being lowered. Construction on these is complete for now,” Mr. Darryl Farmer said. Photo by Maddie Gamertsfelder.

Stopped by Butch Charmoli Gym to check the progress. The lights are BRIGHT and the AC is 🥶!! pic.twitter.com/9pTEapA9UL

The small gym now also features a drop ceiling and a large fan in the middle of the room.

Manual’s library, closed for most of the second semester last year, also underwent renovations. Mr. Farmer said that it should be open and functional soon after the school year begins.

The library’s largest change for this school year is its new carpet. Manual’s Y-club hosted a service event to help Ms. Causey, the new librarian, get set up for the first day of school. Photo by Maddie Gamertsfelder.

Many of the classrooms were shifted around during this construction period and created new classrooms. Contractors working with JCPS Facilities added several additional classrooms, including in the MST wing, where many teachers moved to new rooms.

This is what one of the new classrooms looks like after renovations. Many volunteers came in to help new and old teachers get set up for the first day of school. Photo by Maddie Gamertsfelder.

Manual’s Crimson Hour days have found their way into Manual’s permanent schedule, similar to last year. However, this school year, Crimson Hour will occur in the middle of each six weeks rather than at the end. This year’s Crimson Hour days are September 6, October 18, December 6, January 29, and March 20.

Since RedEye’s original post, Manual welcomed several new faculty. As of Tuesday August 13, this is the updated list:

Many of these teachers will fill the vacancies that previously had assistant principals listed as the teachers. For example, during registration many students noticed that their schedule listed Ms. Vicki Lete as their chemistry teacher. Mr. Farmer said that she will not be teaching and her name was only listed as a placeholder.

Ms. Elise Christensen will serve as Manual’s mental health practitioner, a new position created at every JCPS school for the 2019-2020 school year.