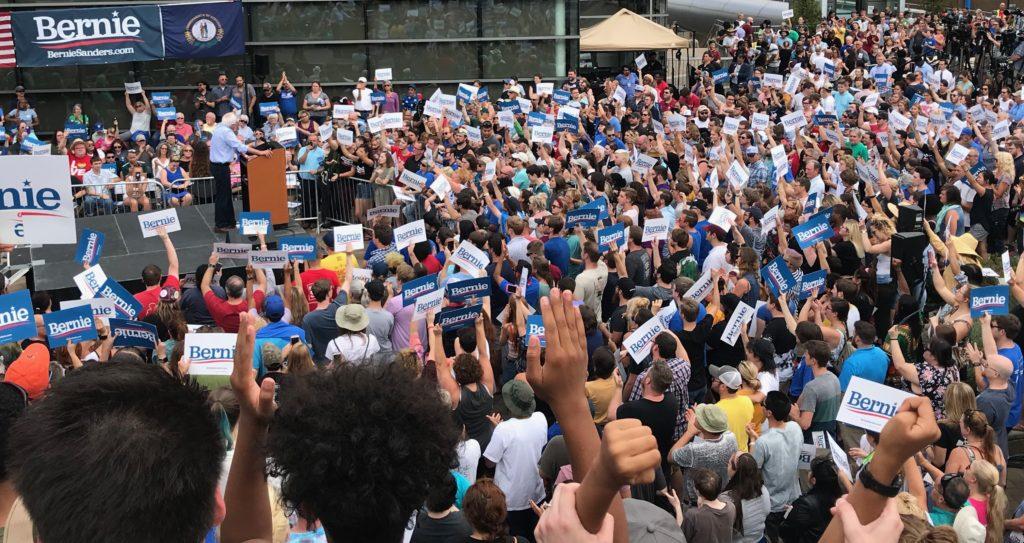 A crowd of almost 2,000 people gathered in the City’s Public Plaza on Sunday to support Senator Bernie Sanders in the People vs Corporate Power Rally.

Rather than focus on his presidential campaign, Sander focused on criticizing Senator Mitch McConnell and his obstructionist practices.

“We are here to say as loudly as we can and as clearly as we can to Mitch McConnell, enough is enough,” Sanders said.

Senator McConnell has recently obstructed several pieces of legislation including raising the minimum wage to $15 and new gun safety legislation.

“Stop the obstruction. Stop blocking the Senate from taking action to raise the minimum wage, to stop gun violence in America, to improve the integrity of our elections, to protect the pensions of workers in Kentucky and throughout America, to guarantee healthcare as a human right, to combat climate change and to stop once and for all billionaires from buying elections,” Sanders said.

McConnell has referred to himself as the “Grim Reaper” and vowed to prevent all progressive proposals from reaching the Senate floor.

Casey Weaver (12, VA) mirrors Sanders criticisms of McConnell. “McConnell has never represented any of the working class of Kentucky. He is driven by corruption and money from big corporations,” Weaver said.

Throughout his speech, Sanders also addressed the primary goals of his campaign, such as equal rights, medicare for all and free higher education. However, several students walked away citing climate change as something that really stuck to them from this rally.

“I’m not all-in on all of Bernie’s policies, but I came because he was expected to talk about the climate, an issue I care deeply about,” Satchel Walton (10, J+C) said.

Erin Bridges (J+C alum) spoke in support of Sander’s Green New Deal and the correlation with her organization, the Sunrise Movement.

“I was really excited to speak at the event because it was an opportunity for the local hub to organize around the Green New Deal. Senator Sanders released his climate plan earlier this week and it’s the only one that seems to be addressing the scale of the climate problem,” Bridges said.

Sanders assured Kentuckians that he was against fossil fuel executives, not workers in the industry.

“I am not going to turn my back on communities in this country who are hurting. We are going to rebuild rural America and in the process create millions of good-paying jobs,” Sanders said.

Other Manual students such as Sam Watkins (10, J+C) came in support of a wide range of Senator Sanders policies.

“I wanted to come out to this rally today and support Bernie because I agree with all of his policies—taking corrupt corporate interests out of politics so that we can appropriately address worker’s rights, climate change, and gun violence are my primary issues politically right now,” Watkins said.

While Watkins can’t vote in the 2020 election, he feels that a youth presence is needed. “Being a body and a voice at events like these is very important,” Watkins said.