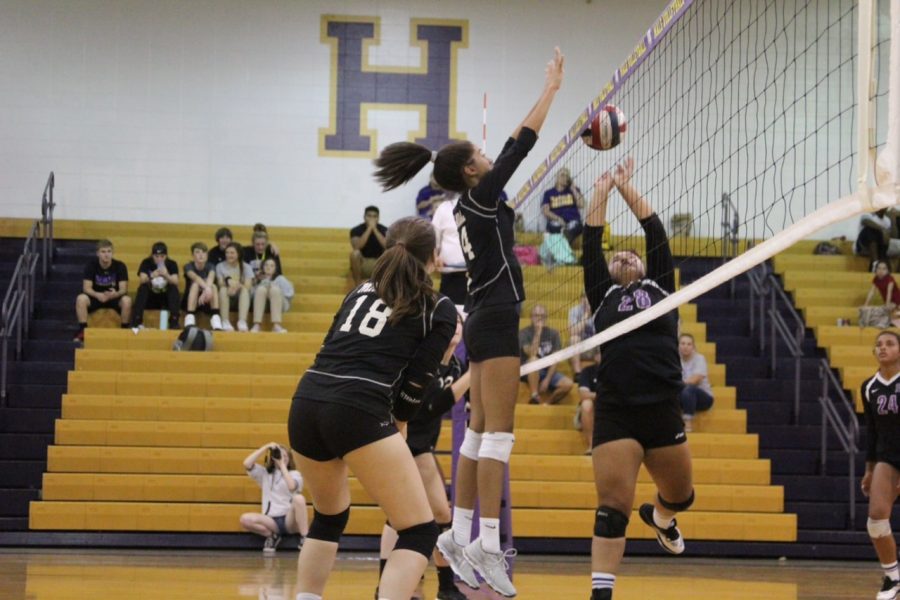 Cecelia Roberts (9, HSU) gets a powerful block out of the middle. Photo by Elizabeth Klein

The freshman Crimson volleyball team played three sets Thursday to pull out a win against Male in their rival’s gym. Their win is the team’s third win of only three games so far in the season.

Aggressive serving played a key role in the team’s victory, keeping Male out of system and unable to return competitive balls. Maintaining ball control gave Manual the upper hand throughout the first set, and Jalen Mills’ (9, HSU) aggressive serving earned Manual enough points to give them a solid lead on Male.

“Our communication and positivity as a team was up the whole time,” Cecilia Roberts (9, HSU) said. “There was never a dull moment on the court.”

In set two, Manual had too many unforced errors to keep the lead, and while they picked it up and tied the score towards the end of the set, the Bulldogs had enough momentum to win the set.

“We leaned on each other and didn’t put each other down for our mistakes which also built a strong foundation to dig ourselves out of holes,” Cassidy Overberg (9, J+C) said.

In the final set, the two teams competed back and forth, but Manual carried more of the energy.

“We really wanted to win, and our drive to do that outweighed our fear of messing up and losing,” Overberg said.

Male took a timeout towards the end of the game in an effort to get the ball back on their side.

Immediately following the time out, Manual’s Cecilia Roberts (9, HSU) scored back to back points with a serving ace to win the game.

The girls as well as coaches were very excited with their win and look forward to carrying the same energy and competitiveness in future games.

“I’m definitely ready to bring a completely different energy and vibe to our games from now on,” Berkley Humphries (9, HSU) said.  “We’ve never had the communication like we did in the game at Male.”

Manual’s coach, Laura Mcculloch, was optimistic about the win.

“After playing the best volleyball all year in set one, then playing not so great in set two, they regrouped and played great in set three,” Mcculloch said.

The freshman Crimson volleyball team will travel to Bullitt Central on September, 11 at 5:30.