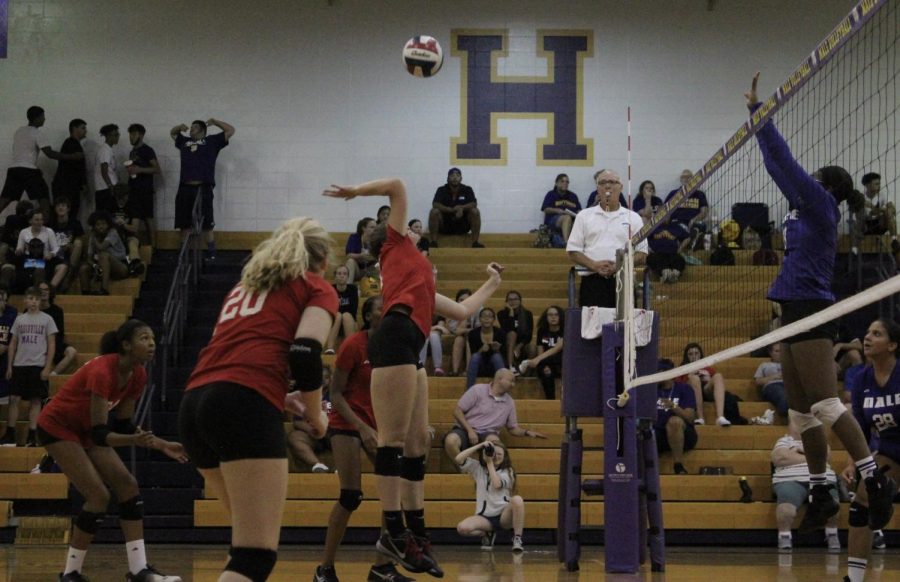 Thursday night, Manual’s varsity volleyball team suffered a close loss against Male at Male High School in a four-set game. The first three sets were only a few points apart.

Varsity volleyball plays best three out of five sets a game. This game went to four close sets. Even though the Manual team lost, they showed their potential for the rest of the season in an early game against their rival.

After losing the first set 25-20, Manual’s team began to figure out their game and fought against Male’s strong hitters in the second set.

Manual won the second set 25-23, showing their energy and ability to fight through against the strong Male team.

Once the team lost the third set 26-24 in a difficult battle, Manual fans in the stands cheered harder than ever for the team.

During the fourth set, Manual fell to Male’s strong offense and lost 25-17. This was Male’s third winning set, and therefore ended the game.

Yelling chants back and forth, the students sections of both teams were loud and proud to support their team no matter the outcome. Manual’s students were all dressed in white, cheering on the team on until the end of the game.

The crowd was specifically excited about Manual’s middle hitter, Nya Bunton (9, HSU), for her 13 kills in the first three games. As a freshman on the varsity team, Bunton was a key player in the performance of the team against Male.

“I think this is a good learning experience for us, especially because of the loss,” Bunton said. “Now we can grow from it and expose our weaknesses to get better.”

Even though the game did not go Manual’s way, the girls’ fans and coaches were excited to see where the potential of this team could take them throughout the season.

“I always tell them, win or lose, our motto in the season is just win the day…and today we won the day,”  Manual’s head coach, Richard Weaver, said. “Yes it’s a loss, but words can’t describe where we’re gonna be in October.”

After losing the first set 21-17 due to Male’s strong offensive kills, the team stepped up their defense and won the second set 21-19.

While keeping up their strong defense, the Manual front row came alive scoring nine kills and defeating Male in the third set 21-12.

“We played really good, and our energy really carried us through the whole, entire night,” Manual’s middle and right-side hitter, Hattie McNealy (10, HSU), said. McNealy took down Male’s defense with her hits and blocks.

While the game was fairly close in the first and second set, the win came easily for the Manual team in the third set, finishing with a score of 21-12.

“They gutted out that second win, and they just dominated in the third set,” Manual’s head coach, Laura McCulloch, said. “What JV [has] been struggling on that we finally saw today is the mental part of the game and not getting down when points aren’t going our way. So I couldn’t be more proud of them.”