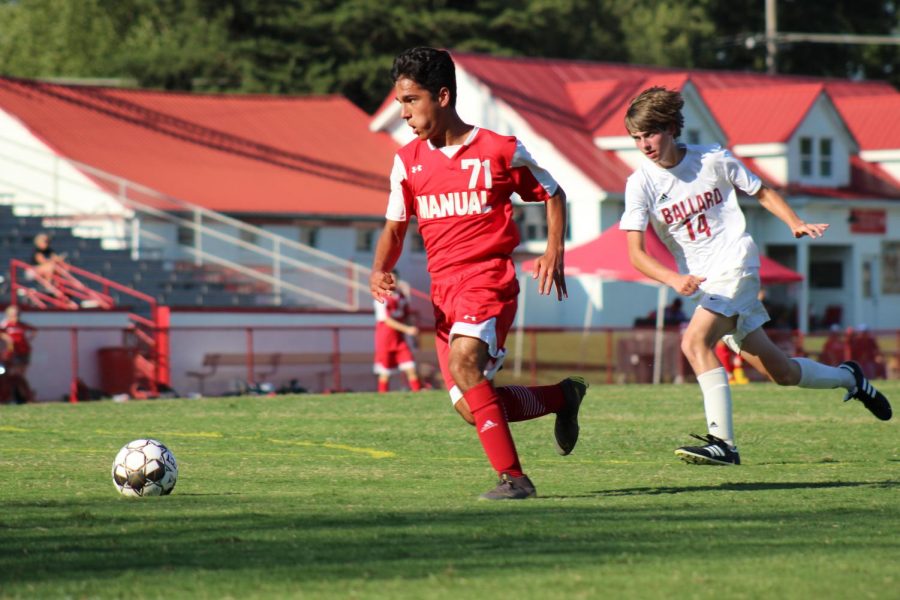 The Manual junior varsity boys’ soccer team played the Ballard Bruins Tuesday at Manual Stadium in an hour-long battle for a goal. Though both teams’ offenses were persistent, neither team scored, leaving the game’s score a barren 0-0.

Manual’s defense held strong through several attacks from Ballard’s offense. Ballard managed a few crosses into the box, but none of their forwards could finish the play before Manual’s defense slid the ball away.

It was a defensive game. The referee called multiple fouls against Ballard– in one instance for grabbing one of Manual’s players’ legs while he was trying to place the ball for a free kick.

Though Manual had a series of nearly successful runs, the offense made very few shots on goal. Along with this, players noted their tendency to play the ball to the center of the field instead of spreading out and passing to the sides. To remedy this, the team plans to practice playing the wings more often.

“We can make better passes on the sides and know how to predict where our forwards are,” Iman Dashti (10, MST) said.

Ballard, who is ranked fifth in the state, was a good match for Manual, who ranks eighth.

“We played a good team. I’m not upset with the outcome, but we should have had a few more opportunities than we did,” Chris Lowber, the JV assistant coach, said.

The team was pleased with the outcome, due to the game’s difficulty.

“I feel that we played very well and that we can play better next game, now that we’re actually looking like a team,” Juan Galvan (9, MST) said.

With the JV soccer teams’ game against Male indefinitely postponed, this was one of the boys’ most important games of the season. The boys’ varsity will play Male tomorrow at 8:00 p.m.