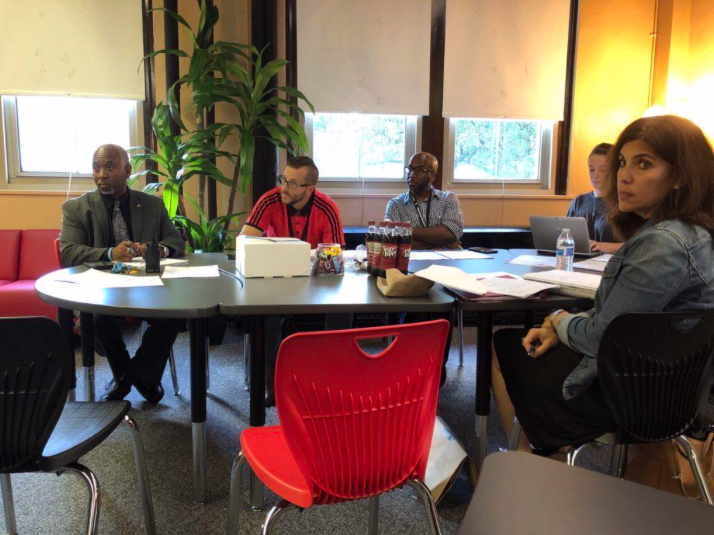 The SBDM Council meets in the MAC Lab the first Wednesday every month. Photo by Reece Gunther

This Wednesday, the September School Based Decision Meeting (SBDM) Council meeting commenced at 3:05 in the MAC Lab. Despite the agenda listing the dress code and a second reading of the attendance policy, they were unable to discuss the topics due to a lack of time.

Principal Darryl Farmer brought up that the dress code needs to be discussed by more than just the council, so a Dress Code Committee will be developed.

Previously, the council had discussed how the dress code is not equitable when it unfairly targets women and minorities. They proposed a review of the code and a possible overhaul.

Mr. Farmer said that an SBDM committee will be formed as soon as possible which will be tasked with reforming the dress code. The committee will bring their suggestions to the full SBDM at a future meeting.

Another topic discussed was the policy of teachers assigning homework over breaks.

Currently, the policy advises teachers to “refrain from assigning homework over breaks.”

However, the council has concluded that the language should change to, “Teachers cannot assign new assignments/homework on the day before a break.” The council is also creating a more formal list of breaks that are included in this policy.

While this could change for normal classes, AP classes will still be exempt should a policy change.

After a lengthy discussion, a tentative wording of the policy clarifies that teachers shall refrain from assigning homework the day preceding a break. Mr. Applegate suggested defining homework, assignments and breaks to make the policy clearer.

Assistant Principal Greg Kuhn attended the meeting as a guest to go over the school safety plan.

“School safety is the most important thing that happens in the school on a daily basis,” Kuhn said.

Mr. Kuhn emphasized the school's role in preparing for any situation that could jeopardize student safety, even if it's unlikely to happen. Teachers and students will play a vital role in reporting suspicious activity.

Due to the lack of space at the University of Louisville, the new shelter in place location has been changed to Cochran Elementary, in case of a chemical leak or a fire that results in a permanent evacuation.

In addition, a new safety measure has been introduced called the School Safety Assessment Prep Team. This would be a group including the new mental health counselor, Amy Myron, and a couple of other professionals with experience in safety awareness.

Near the end of the meeting, the council clarified some details related to the protection of teacher instructional time. There is a section of the policy that allows teachers to deny students leaving class for a field trip or an out of class activity if the student has a grade less than a C minus.

However, the council clarified that this does not apply to YPAS performers that must leave class for a production.

Lastly, the council approved the expenditures for Manual and YPAS. They also approved the request from the yearbook staff that 50% of their profits go to the school fund. This would prevent JCPS from claiming them for the district budget.