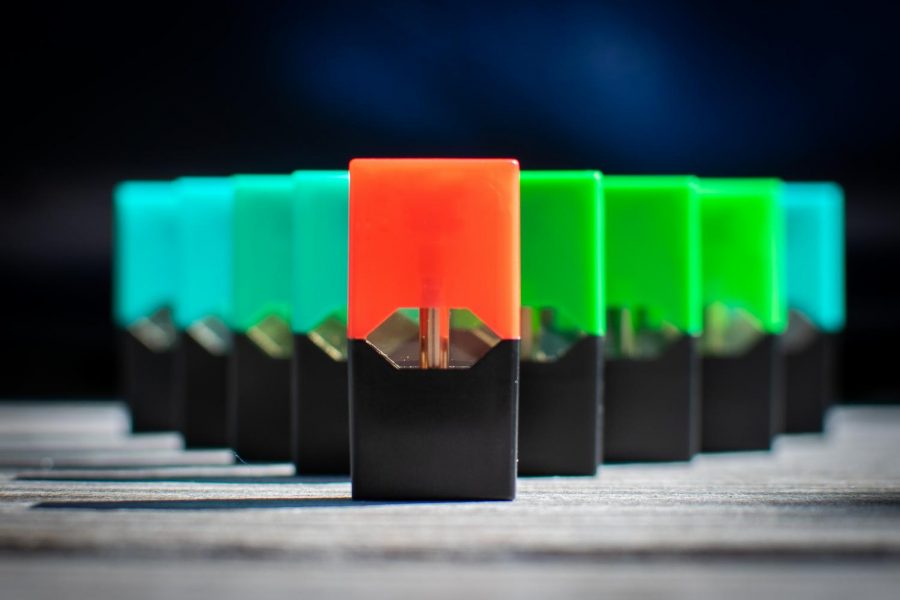 Several Juul flavor pods. Many believe that Juul targets younger audiences by offering these flavors for their electronic cigarettes.

Recently, I came to the discovery that it is legal for e-cigarettes to be advertised on television but cigarette advertisements have been banned since 1971. Why is this the case? Why do these two similar addictive and harmful products get treated differently? To answer these questions, let’s compare the two products.
Cigarettes vs. E-cigarettes
Cigarettes are a known and a leading cause of lung cancer. Cigarettes are a handheld cylinders rolled with tobacco, filled with many psychoactive chemicals . There are over 70 different dangerous chemicals in them, like diacetyl and multiple carcinogens.

E-cigarettes are not as dangerous as cigarettes but they are still quite unhealthy.

Both contain nicotine, a highly addictive chemical that is toxic to developing fetuses and impairs the growth of the brain in adolescents. E-cigarettes have also been identified as a common gateway to cigarette use. So why can e-cigarettes advertise with freedom when cigarettes cannot?

Declines in cigarette sales continue to accelerate in 2019, falling an unprecedented -11.2 percent year-over year as of May 18th – the largest year-over-year decline in the available Nielsen data: https://t.co/lKGAwCmtRf pic.twitter.com/OKJfv69mTP

Targeted Advertising
Well, the short answer is that the government hasn’t stopped them. E-cigarettes weren’t included in the original government restrictions on tobacco advertising because they were made over fifty years ago.

Since they haven’t been revised and no new laws have been passed, e-cigarettes currently have much more freedom of advertisement than cigarettes do.

Their ads are often targeted at younger people, including high-school students at Manual. E-cigarettes try to market their products as cool and trendy. Though they claim that they do not want young people using them, they’ve put out several ads of young adults at parties enjoying themselves while using e-cigarettes.

They don’t actually want kids to stop buying e-cigarettes because they’d make less money. Only 3% of adults use e-cigarettes in the U.S. but the number of teens who do so, is up by 78%, to more than three million teens.

By having access to people close to them being over 18, it makes e-cigarettes grow as a trend and makes them more accessible to younger teens. E-cigarettes were originally created as a way for adults to stop their cigarette addictions but are now used by teens, for fun.
Meeting the People
Almost all Manual students know somebody who has used or currently uses Juuls or some other brand of e-cigarettes.  Many students also agree that they thought e-cigarette flavors were at least partially targeting younger audiences.

“Giving flavors to their products is explicitly marketing them towards children, with their certain fruity flavors and candy-like flavors,” Satchel Walton (10, J&C) said.

75% of students said e-cigarettes posed a severe risk to the user’s health and none of those interviewed said it posed no threat.

“It’s definitely a better substitute for smoking, just the fact that it’s not entering your lungs and filling them with tar, but, in younger people, it adds an early tendency towards addiction in general,” Lily Matthews (10, VA).

Juul has dialed back their campaigns recently but there’s a new problem.

Juul now has a place in internet culture. Memes and social media include a lot of younger people and they’re advertising for Juul just by talking about it. The constant social media presence makes Juul’s products ever more present in the back of the mind, building association between, for example, high school and Juuls, parties and Juuls or social acceptance and Juuls.

Social media has hit a wave of YouTube videos explaining how to do vape tricks, Instagram accounts posting random pictures, Twitter memes and an internet full of e-cigarette information. Vaping is now seen as an internet sensation.

There is an account based in Atlanta, Georgia, that posts pictures of Juul pods found in random places. This is a prime example of how e-cigarettes have been turned to a solution to addiction to a joke.

So, Juul is dialing back on its targeting of teens and children but they’re within their rights to go back at any time and the problem is now transcending direct actions from the company. Juuling is a new epidemic and the way to prevent it from spreading is not clear or simple.

People should be treating them like we treat cigarettes; refusing to let them have such easy access to public advertisement for a dangerous and addictive product.

Featured Image Citation: “JUUL pods” by Vaping360. is licensed under Creative Commons Attribution-NoDerivs 2.0 Generic. No changes were made to the image. Use of this photo does not indicate photographer endorsement of this article.