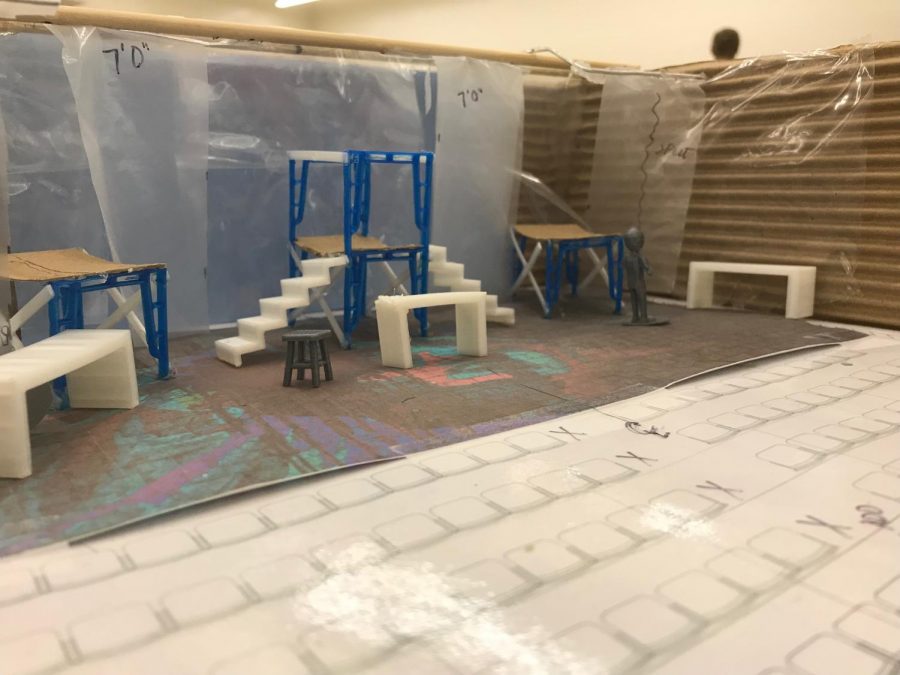 This is the small mini model of the YPAS "Black Box" Theater, used for stage directions and pre-planning for production. Photo by Tyler Lericos.

This September, the Youth Performing Arts School (YPAS) will begin performances of “Anon(ymous),” a retelling of Homer’s epic poem,”The Odyssey.” The student actors have been rehearsing everyday after school for three hours and are very eager to begin.

Brian Hinds, the current YPAS theater director, has been teaching theater at YPAS for seven years. He has taught four different theater classes and has directed many of the stage productions at YPAS.

Hinds is the director for the upcoming production of “Anon(ymous).” His actors have been rehearsing for a while and are preparing for either their first or second performance in a Mainstage production.

“My favorite thing about YPAS theater is the diversity and skill that we have across our four theater classes,” Hinds said. “And the opportunity to develop plays with [the students], to explore things together and learn from each other as we’re building theater.”

Chandler Morris (11, YPAS) believes that what makes YPAS theater so different is the inclusive atmosphere. His enthusiasm is echoed by other students. “I love the inclusivity of all the teachers, staff and students,” Morris said. “Everyone’s opinion, views and backgrounds are all welcome, and one way or another we can all work together to create projects like ‘Anon(ymous).’”

Many other students, like Chloe Hill (12, YPAS), Anna McGreevy (11, YPAS), Jason Maina (12, YPAS) and Will Herensmith (12, YPAS) said that YPAS theater has been “like a family” and more inclusive than most other magnets. Even Jason Maina, who transferred from MST to YPAS halfway through his four years at Manual feels included at YPAS.

“My favorite thing about YPAS theater is probably the community,” Maina said. “And everyone around me who loves doing the exact same thing that I do and the support that I get… I have never gotten the same amount of support in any other community than I have here, and it’s really enriching.”

Jack Foldyna (12, YPAS) is considered a veteran– a YPAS major for all four years. He’s a senior and has performed in two main stage productions. He agrees that YPAS theater has a feeling of inclusivity. He explained that it’s also somewhat of a personal and intrinsic journey.

“I really enjoy theater because it’s not just that you get up and you’re like, ‘Oh I’m an actor!’ No, acting is like exploring human character. In order to build these characters you have to look in yourself,” Foldyna said. “The teachers teach all these different exercises and steps and things to think about– so it’s being honest with the character, basically.”

YPAS will perform “Anon(ymous)” on Sept. 20, 21, 25, 26, 27 and 28. All productions will be shown at the Youth Performing Arts Center at Samuel V. Noe Middle School. For their showing schedules, click here.