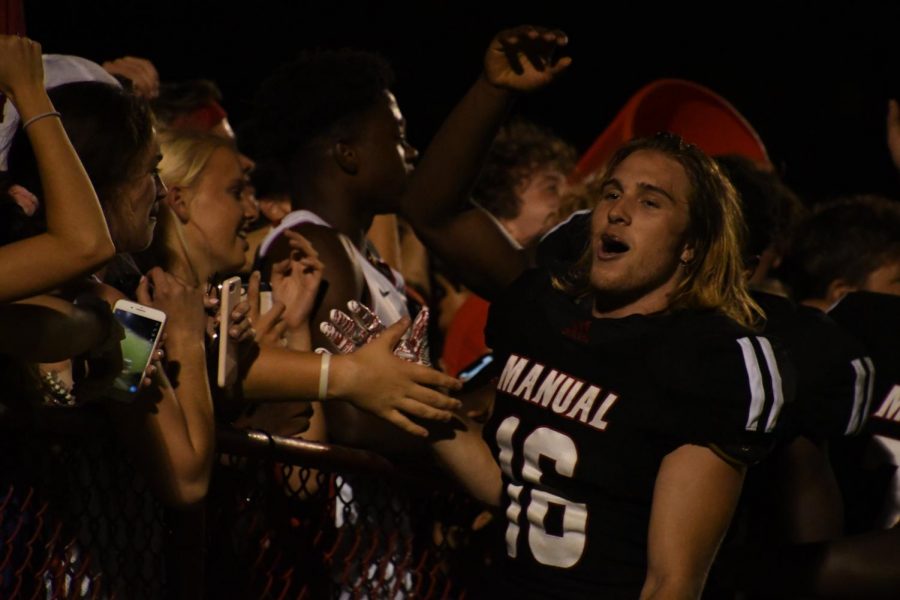 Sean Squires (#16, 12) celebrates at the end zone as the student section and football players sing "Stand Up and Cheer." Photo by Pieper Mallett.

The Manual Crimsons football team defeated the Oldham County Colonels last night 41-14. Manual’s offense, and more specifically quarterback Zach Recktenwald (#17, 12) and the various running backs, dominated much of the offensive action and subsequent touchdowns.
First half
From Manual’s first touchdown with a 50-yard pass to Eli Blakey (#1, 11) to DeAaron Robinson’s (#20, 12) 30-yard carry to get the Crimsons second touchdown of the night, Manual’s offense came out fighting.

“The game went great, just as planned,” Manual coach Scott Carmony said. “You never plan or expect to have any sort of margin, obviously the goal is to win the game and we did what we had to do.”

Prior to that second touchdown, Braxton Cannon (#36, 10) made an impressive 26-yard carry to put Manual in a spot where they felt comfortable running with the ball. The first two touchdowns put Manual 13 points ahead of the Colonels.

Oldham County finally got on the board with a 29-yard pass from quarterback Sam Young (#4) to Tyler Holvey (#9) to make the score 13-7, but Manual didn’t let that hold them back.

In the next drive, JaWaun Northington (#22, 10) ran in 21 yards for a Crimson touchdown and recovered an Oldham County fumble that Darren Miller forced. At halftime, Manual led Oldham County 20-7.

“I felt like I had to do my job and do my part like everybody else was doing,” Northington said.
Homecoming court
The homecoming court presentation took place during halftime prior to the performance of the Crimson Sound and following the Manual Dazzlers.

The king and queen of homecoming were Brody Fawver and Samantha Simmons. The prince and princess of the homecoming court were Adam Lapinski and Lily Wobbe.

The homecoming king and queen is, Brody Fawver and Samantha Simmons. The homecoming prince and princess are Adam Lapinski and Lily Wobbe. pic.twitter.com/d3ykChfEzt

Second half
Manual received the ball after halftime and once again had some very impressive offensive action. Townsend ran 59 yards to score a touchdown and Recktenwald passed to Sean Squires (#16, 12) for an additional touchdown.

“What stood out most was not giving up at all, keeping our foot on their necks,” Towsend said. “Don’t lose, the game plan was just not to lose.”

Oldham County’s second and final touchdown of the night came late in the third quarter with a small rush from Young. This gave Oldham county 14 points, still incomparable to Manual’s 34.

Rasheno Saunders scored the Crimsons’ final touchdown for the night, pushing his way through the Oldham County defense to make the final score 41-14.

Manual football is now 3-1 after their victory against Oldham County. Next week Manual will have a bye week and will play at home versus North Bullitt the following week on September 27.