Four of five Louisville public pools did not open this summer

Public pool closures mean more than a dried-up pool for the Louisville community. 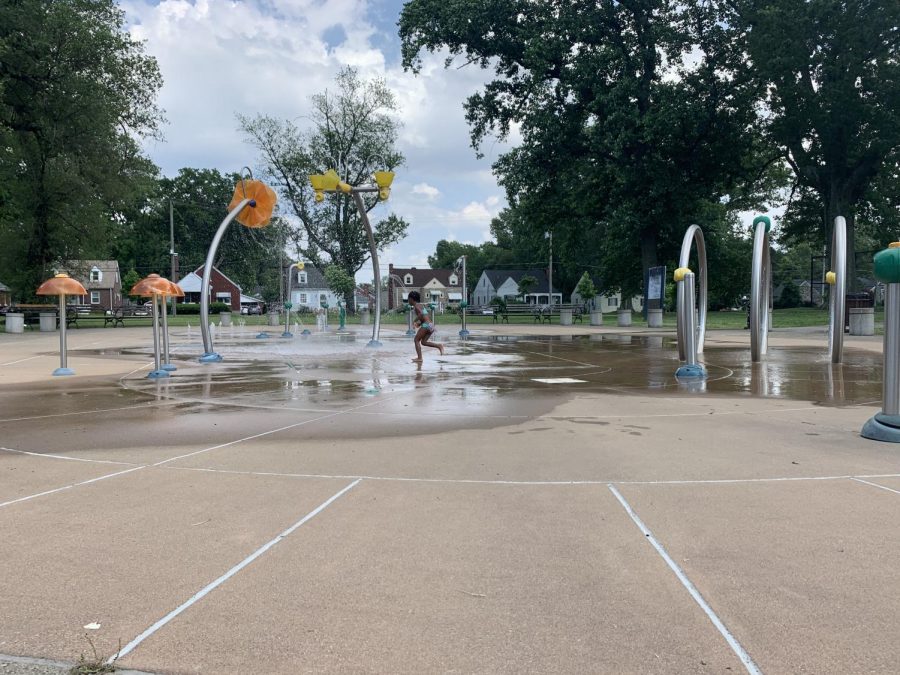 The chained, padlocked fence rusted in the hot sun. The basketball net swung lazily in the warm breeze. The harsh blue color of the tile stuck out sharply against the grayness of the cracking concrete. It was silent.

Just last summer, though, an entirely different scene played out.

The pool was filled with people — laughing, shrieking, splashing. The older teenagers played basketball in the deeper end of the pool as the younger kids dunked each other where it was shallow. The lifeguards joked around with the patrons and the adults soaked in the sun.

John Allen, 39, a long-time resident of Algonquin, and his four kids went to the busy pool, excited for an afternoon of fun and the opportunity to cool off.

“I was like, ‘Man, we got to do something to make it fun.’ So we got a lot of buckets and cups and we were just having a water fight,” Allen said, laughing. “We had fun.”

Unfortunately for Allen, he and his family are going to have to look somewhere else for that fun this summer.

All across the nation, public swimming pools are being drained. City governments (the agencies that typically run public swimming pools) are citing plenty of reasons: declining attendance rates, safety concerns, and a lack of resources are just a few of them. But in Louisville, public pool closures stem from a much larger budget problem.

In March, Mayor Greg Fischer announced that this summer, Louisville would not be reopening four of its five public pools. This was quite the disappointment for residents of Algonquin, Camp Taylor, Fairdale, and Sun Valley.

Each year, Mayor Greg Fischer crafts a budget proposal for Louisville’s 620 million dollar general fund. This includes funding for the police department, Louisville Metro Animal Services, Offices of Safe and Healthy Neighborhoods, Parks and Recreation, the fire department, and many other public services.

Louisville’s metro council then goes over the budget, has several public hearings, and votes on a final budget at the end of June. This year is different, though, and this difference stems mainly from Kentucky’s pension crisis.

“This has probably been our most challenging budget this far,” said Jessica Green, Louisville Metro Councilwoman for District One. “I think the number comes down to having to find about 25 million dollars in savings.”

For many years, Kentucky pulled money from its pension fund in order to finance other services and stimulate the economy. However, that didn’t really work out. The plan, which was conceived in the late nineties, has resulted in a huge deficit of money and a lot of angry civil servants who are concerned about the state of their pensions.

Kentucky’s state legislature and governor, Matt Bevin, have been working to come up with plans to mitigate the effects of this pension crisis. And while each plan results with a plethora of unhappy citizens, one has been particularly devastating to Louisville’s city budget.

Our governor and the state’s legislature crafted a plan that increases the amount the city has to pay to the pension fund. This means that their general fund was tighter this year by nearly 25 million dollars. Unfortunately for public pools and many other services, there is simply no money available.

And it’s only going to get worse. The state is requiring a 12% increase for the city’s pension fund each year. In 2018, the city paid 76 million dollars. This year, they will have to pay 100 million dollars. And in 2020? The payment is going to increase even more.

“It would go to, we don’t know exactly, but certainly something north of 136 million dollars, probably more like 150 million, and maybe it’ll level off,” said Bill Hollander, Louisville Metro Councilman for District Nine and head of the budget committee. “There’s nobody on the council or in the mayor’s office who’s happy about the idea of closing pools.”

The city is offering alternatives to the closures, however. After hearing about the public pool closures, Papa John’s CEO Steve Ritchie, Louisville native and NFL player Jamon Brown, and Brown’s team, the Atlanta Falcons, offered to help. Together, they were able to raise $100,000 for swim nights at the YMCA. There will be ten swim nights throughout the summer — five at the downtown YMCA and five at the Southwest YMCA.

There will also be opportunities for the Louisville community to swim at Central High School’s indoor pool and Mary T. Meagher, Louisville’s only remaining public pool and only public indoor pool, will be open all summer.

But for the kids in the neighborhoods where the pools are being closed, the public pools are more than just a place to swim and an opportunity to cool off. For these kids, the pools are a way to spend a relaxing summer day with their friends and to steer clear of trouble.

“It don’t give the kids anything to do when it gets hot out here and most people can’t afford to go to the Y or even travel that far, for that sake, you know?” Allen said. “So I think it’s ridiculous.”

Bill Hollander also offered up splash pads, or small water playgrounds, that can be found at many parks in Louisville as an alternative to the closed public pools. But even Hollander admits that the splash pads don’t even come close to covering the effect of the pools’ closure. And for those who are intended to use them, they are almost laughable.

“If you put sixteen-year-old boys over there and they’re running and the water’s splashing everywhere, then they are running over the little kids, you know?” Allen said. “And there’s just not enough room.”

Even if the Metro Council votes to reopen the pools for 2020 and cuts funding for something, the pools will still remain closed this summer.

“ I think that the value they add to the community and especially with Algonquin pool being the only one that is a city-run pool in West Louisville,” said Councilwoman Green, “makes keeping them open a priority.”

As for Allen and his family — they will have to find something, whether it be a swim night at the Y or playing in the splash pad, other than a water fight to keep them busy this summer.