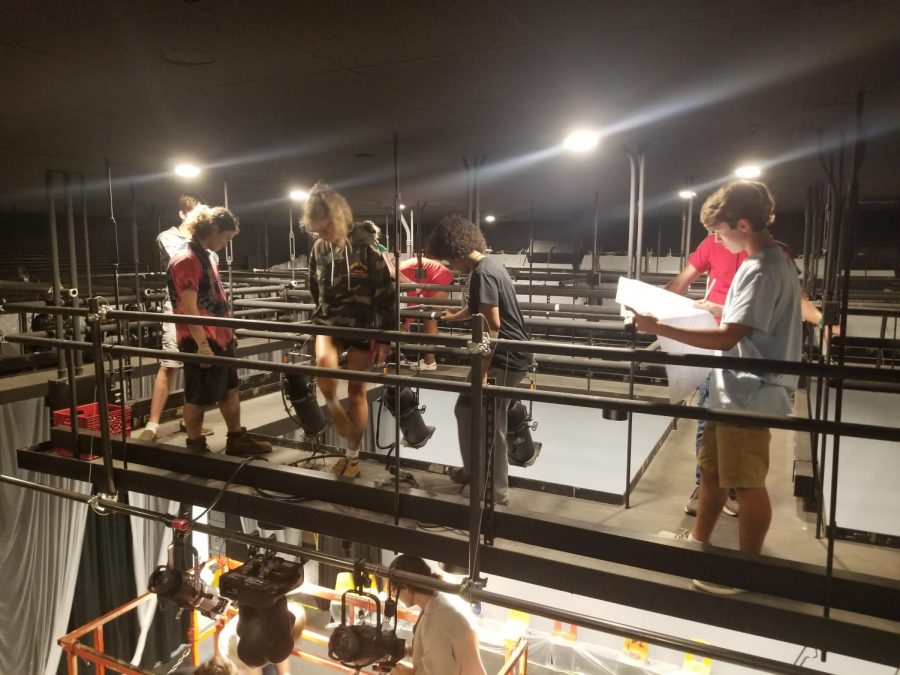 This story was submitted by Guinnevere Lane (10, J&C)

The Design and Production students have been preparing for “Anon(ymous)” through their carpentry, lighting, and costume crews during lab hours at YPAS in the weeks leading up to the first school show, Sept. 18.

Mr. Bob Upton (Scenic Design) replaced Eric Allgeier as the new Design and Production teacher. He believes that when attending this production people will see a good representation of the harsh and bleak surroundings immigrants and refugees encounter.

“There’s not a great amount of happy going on,” Upton said. “It’s industrial. It’s kind of claustrophobic at times. It’s very enclosed. It’s very rough and cold, and it envelops you in a way, so it’s kind of that idea of being locked in your struggle.”

Students have been hooking up lights for the production in recent weeks. “We’re reading the plot, seeing what lights we need, and then hanging them up in the correct positions and areas,” Kendall Brown (10, YPAS), a member of the lighting crew for “Anon(ymous),” said.

Jack Gilles, a Design and Production junior is the master electrician on the lighting crew for “Anon(ymous)”. The crew has to hang lights in the black box on the catwalk for the upcoming production. “Most of it is just carrying lights from storage up to the catwalk, then hanging and circuiting and focusing those lights. My job is more to overview the crew –make sure that they are on task, and tell them what to do, where and how to hang lights, that sort of thing,” said Gilles.

The carpentry crew works on stage scenery, while the props manager makes the props.

The master carpenter, Veronica Johnson (11, YPAS), is simply in charge of the carpentry crew making sure everyone is working efficiently and understands the tasks at hand.

The stage floor will be covered with bricks, stamped onto the floor by the scenery students on the carpentry crew.

Paint charge, Abigail Haverstick (11, YPAS), is in charge of the paint for the different scenery pieces. “Then we are going to trace the Statue of Liberty on the floor with projectors that are going to be projecting from the sound booth,” said Haverstick.

“The whole idea of the concept of the show we’re doing is that everything is unclear, so like we have plastic hanging down on the sides of the stage right now,” Tori Adcock (12, YPAS), a student on the carpentry crew, said. “People can stand behind it, and you can see them, but you can’t tell who they are.”

The students on the costume crew have to make a total of six aprons and one bird costume for the upcoming production.

Mary Claire Mehling (10, YPAS), a student on the costume crew, has been working with a student on sewing one of the six aprons.

“Well, first off, we got the pattern, and we pinned it onto the fabric in the right direction, and right now what [Gia Guralnik (9, YPAS)] is doing is she’s cutting out each pattern piece, and then from there we will go to serge each individual piece so it doesn’t unravel,” Mehling said.

Stasia Navarro (10, YPAS), a student on the costume crew has been working on the bird costume in recent weeks. “The bird is not only going to be fabric feathers, we’re also going to use real feathers,” Navarro said.