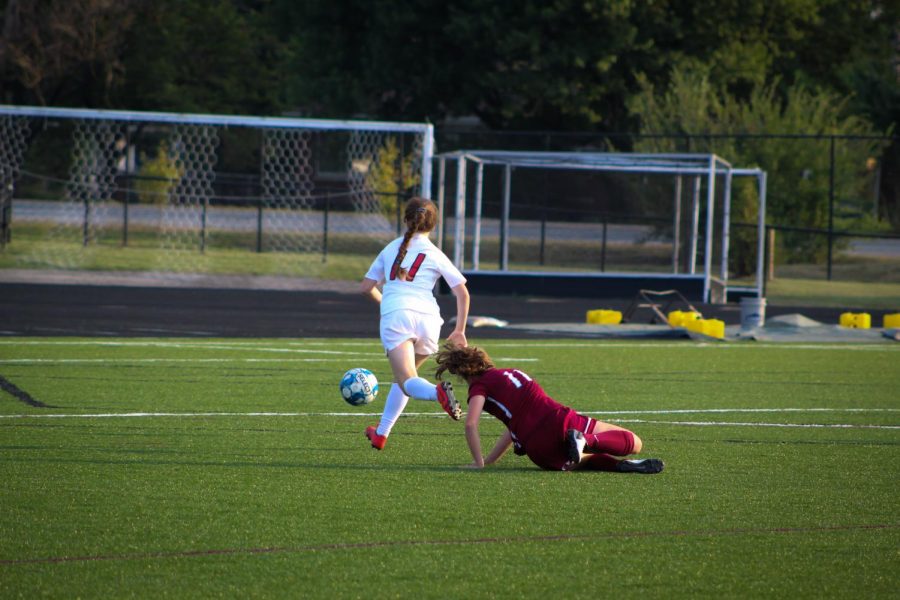 Mia Schecter (9, MST) slips past the Assumption defender, Josie Deye, which sets Schecter up for a shot on goal. Photo by Anna Schroll.

Both teams maintained a stable defensive position in the beginning of the first half, with many goal attempts by the Rockets thwarted by Manual’s defense and goalie, Lacy Dodds (10, HSU). With eight minutes left in the first half, Assumption sophomore, Taylor Rudisell, scored a goal.

The Crimsons kept fighting through the heat for the remaining eight minutes of the first half, working hard on both the offensive and defensive lines in an attempt to tie the game. However, by the end of the first half, the score remained 1-0.

In the beginning of the first half, Manual’s defense worked hard against the Rockets’ offense, stopping many of Assumption’s attempts at scoring.  With 14 minutes remaining in the game, freshman, Kylie Boling scored another goal for Assumption, giving the Rockets a 2-0 lead over Manual.

Manual continued fighting, despite being down 2-0, working hard to get a goal. With a pass from Molly Gregory (10, J&C), Alyssa Goodman (11, HSU), was through on goal and got a shot off, but it was blocked by the Assumption goalie, Sarah Glenn, thwarting Manual’s attempt to score.

Manual’s defense worked hard to keep the Rockets from scoring, blocking a free kick and keeping pressure on their offense as much as possible. However, with only a minute left in the game, Assumption freshman, Gracie Crawford, scored a third goal, making the final game score 3-0.

Manual’s head coach, Aaron Bridge, felt his team could have won had they finished their shots more effectively.

“Our problem is that we aren’t finishing on goal. Had we finished on goal, we would have been up 4-3 or tied 3-3,” Bridge said.

Assumption’s coaches, Adam Hitt and Mary Wallitsch, however, were pleased with how their team performed in the game.

“The game went very well, I think we played very organized, with a lot of good communication for us and distributed the ball well,” Hitt said.

“[We] connected a lot of passes. We got a lot of shots off and attacked a lot more than we have been recently so it was a great game,” Wallitsch said.

This was one of the JV Crimsons’ last games of the season. Their next game will be on Wednesday, Sept. 25, against Pleasure Ridge Park at 5:30 at Manual Stadium.