“Our home is on fire” Global Climate Strike begins 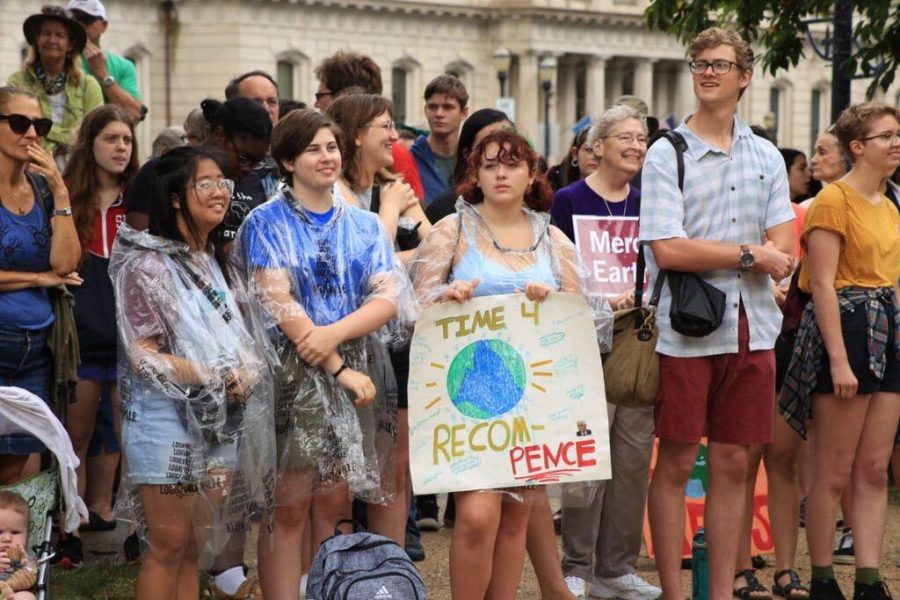 Louisville youth have joined 9,000 cities and activists around the world in the Global Climate Strike, where students forgo classes in order to attend public demonstrations calling for the passage of climate change legislation, specifically the Green New Deal.

Swedish student climate change activist Greta Thunberg became the forefront of the strike, whose “Fridays for Future” movement entailed missing school on Fridays to advocate for political action on global warming and climate change and has made its way to Jefferson Square Park, where over 200 demonstrators demanded action from Kentucky representatives.

The protest, currently scheduled to take place from September 20th until the 27th, has attracted many supporters, from teenager activists to public officials like Louisville Mayor Greg Fischer, who on Friday urged Metro Council to declare a climate emergency.

The Friday strike featured Mayor Fischer signing onto a fossil fuel money pledge that prohibits legislators from accepting funds over 200$ from PACs, lobbyists, or SEC-named executives of fossil fuel companies to ensure nonpartisanship in city office.

Louisville Metro’s Sustainability Initiative has set forth several goals to combat climate change, including cutting greenhouse gas emissions by 80% by 2050 and planning for more infrastructure to combat extreme weather conditions.

Emma Stuber (12, VA), Manual’s lead for the climate strike, is confident in Louisville’s future in making a greener city but shares concern about current efforts.

“I’m feeling hopeful, but we’ll do better. I think right now we aren’t doing enough to support climate policies in any sort of really meaningful way to directly impact the severity of the issue. We could do a lot more with public transportation, with energy usage and with the urban heat island effect mainly in the downtown area. If we work to improve those areas we could be doing a lot more,” Stuber said.

Hundreds of Louisville students, parents and politicians joined cities around the world in a day of global protest to demand action on climate change.

What are you doing? How will you be remembered? What will be your lasting impact on the world? How will you leave your mark, when you cannot stand up, and get serious! Fight Back! #extinctionrebellionyouth #climatestrikeky #fightforourfuture #strikewithusky

Student activist Sadie Townshed (12, MST) cites her home state of Maryland’s 2018 flood as being her wake-up call in the climate change crisis.

“I faced the truth: climate change was hitting my home and my family, and I could no longer sit by and ignore the urgency of now,” Townshed said.

But Townshed does not believe politician’s reactions are sufficient enough.

“Our politicians continue to remain complacent, sitting up in their ivory tower while droughts, storms, fire, and floods destroy the land and the people they are supposed to be protecting…Our politicians continue to remain complacent, even as Martin County residents are poisoned by the very water they drink, West Louisville residents are choked by the very air that they breathe, and our own city is swallowed by the effects of the ever-intensifying Urban Heat Island,” Townshed said.

“I have never really been super involved in political activism, but climate change is such a massive issue that is affecting all of our lives, and not enough is being done about it,” Annabelle Davis (11, VA) said.