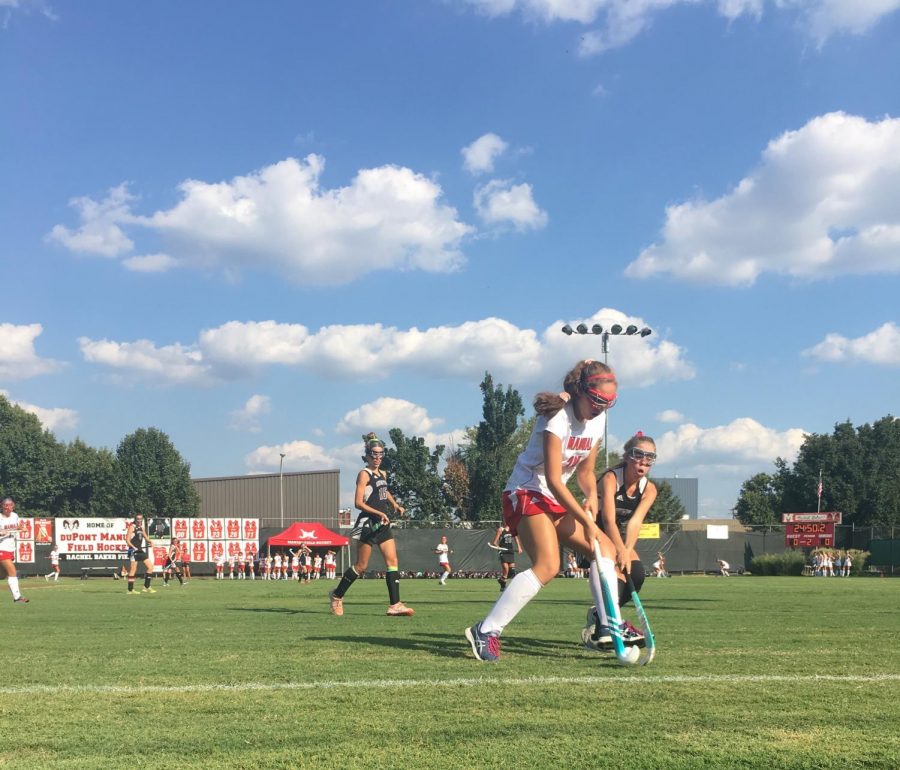 Assumption scored the first goal of the game with only eight minutes left in the second half.

Although neither team scored during the first half, each team put up an aggressive fight.

For most of the game, Manual’s offense stayed strong as Assumption’s defense tried to turn it around and move the ball down the field.

With 15 minutes left in the game Ella Diehl (9 J&C), from Manual’s team got hit on her forearm by a stick from the opposing team while defending.

“When she took the shot, her swing had a really high swing in the front and her stick came up and hit me in the arm,” Diehl said.

Manual’s crowd of parents and supporters were on the edge of their seats, cheering for the team as they rushed to try and get a final goal.

With only 15 seconds left in the game, Manual got two penalty corners. The first one missed the goal slightly and the next one was blocked by Assumption’s goalie.

Despite their attacking efforts, Manual was unable to get a goal, leaving the final score 1-0 in favor of Assumption.

Olivia Wagner was the assistant coach for Manual’s freshman team during the game. She thought the team did some things well, but she also thought that they could do a few things to improve.

“I think they worked up the ball as a team really well … what I think they could do better next time is probably spread the field, spread out a little more. A lot of them are doing each other’s jobs, and they just need to do a single job,” Wagner said.

Players were also satisfied with their performance.

“We fight and play like a family. We did a really good job today and I’m proud of us. There is just a few things we need to work on,” Story Hapier (9 HSU) said.

Although Assumption won the game, they felt that there are some things they could improve on as well.

“We brought it out more in the second half and were more aggressive but we need to improve more,” Assumption freshman, Jill Eichberger, said.

The freshman field hockey team’s next game is Sept. 24 at 4:15 against Sacred Heart. This game will be held at Sacred Heart’s field.