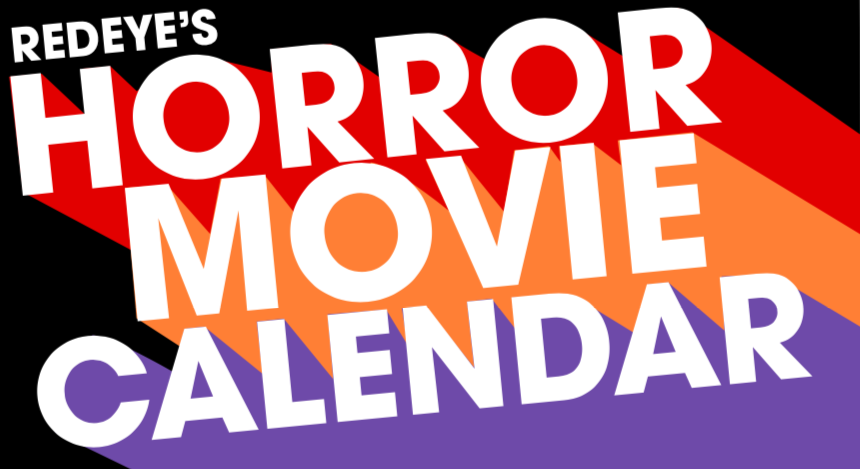 This October, get into the Halloween spirit with RedEye’s horror movie calendar. 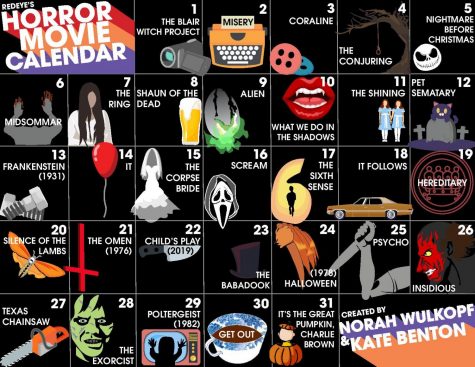 “The Blair Witch Project” kickstarted the found footage horror genre, so it’s fitting that it kickstarts our Halloween calendar. Marketed as a real documentary, audiences flocked to see it. It’s the perfect scary film for the Halloween season!
Oct. 2, “Misery”

“Misery” is exciting and keeps you on edge the whole time, trying to get inside the heads of author Paul Sheldon and his nurse-turned-captor Annie Wilkes.

It is hard to oversell “Coraline.” It’s playful and gorgeous yet twisted and traumatic. Selick masterfully translates Neil Gaiman’s novel into a whimsical world of claymation. Who wasn’t scared out of their mind by “Coraline”?
Oct. 4, “The Conjuring”

“The Conjuring” is based on the real-life paranormal cases of Ed and Lorraine Warren during the 70’s. Led by Vera Farmiga’s stellar performance, this series’ visceral scares and technical filmmaking elevate it above other horror movies.

Submitted by Akhila Nadimpalli
Oct. 5, “The Nightmare Before Christmas”

Doubling as a Christmas movie and a Halloween movie, you can easily get in the Halloween spirit with some creepy animations, yet still feel all warm and fuzzy because of the Christmas cheer. Its music is catchy, and its scares are genuinely scary.

While “Midsommar” isn’t particularly frightening, it’s lots and lots of fun. In most cases, despising almost every character in a movie would ruin the experience; however, this makes characters’ brutal demises all the more enjoyable. At times, “Midsommar” feels more like a summer romp than a spooky Halloween flick, but once all the pieces fall into place it’s truly horrific.
Oct. 7, “The Ring”

Though this certainly isn’t a “prestige” horror movie,”The Ring” is pure, horrific fun. Filled to the brim with jump scares, it’s a great movies to watch with friends.

Submitted by Akhila Nadimpalli
Oct. 8, “Shaun of the Dead”

It’s a fun movie with zombies and has one of the best scenes with “Don’t Stop Me Now”, and I love it for that. “Shaun of the Dead” rips apart zombie movie tropes while being a heartfelt story of friendship and survival.

Submitted by Tyler Lericos
Oct. 10, What We Do in the Shadows

The director of “Thor: Ragnarok” presents a mockumentary about the vampire community in New Zealand. As I’m sure you can expect, it’s hilarious.
Oct. 11, “The Shining”

It’s simply amazing. You’ve definitely heard of it; you’ve definitely seen the “Here’s Johnny” part, but have you watched it? The moment you start, you know something is off. Everything is eerie and off until it reaches a crescendo of terror. What’s not to love about a psychological thriller turned supernatural turned family drama?

It’s black and white, over the top, and abosolutely amazing. I love old movies. They’re absolutely delightful and campy in a way that lots of movies just aren’t anymore. I highly recommend Frankenstein.
Oct. 14, “It”

“It” is an intense ride carried by a group of extremely talented child actors. Sure, it’s spooky, but the kids are what make it stand out. It’s a horror movie with heart.
Oct. 15, “The Corpse Bride”

Another Tim Burton classic for the calendar! The characters are surprisingly well-developed, the music is jazzy, and it’s not too scary. It’s the perfect amount of spooky to help remind you that it’s Halloween season.

“Scream” is a tongue-in-cheek slasher that hates horror movies. Goofy is the best word to describe it. Sure it gets serious, but at its core “Scream” does everything it can to satirize 80s horror. Not only are characters aware of horror tropes, they are obsessed with them, creating the most meta of narratives.
Oct. 17, “The Sixth Sense”

M. Night Shyamalan and Bruce Willis bring their A-game to this movie. It’s a fun movie with a good twist.

“It Follows” is a slow but steady anxiety filled ride. Forcing characters to make a harsh moral decision, “It Follows” works as both a horror movie and a cautionary tale.
Oct. 19, “Hereditary”

“Hereditary” is horrific in every possible way. Paranormal forces lurk in every scene, quietly haunting the Graham family as tragedy after tragedy befalls them. A mother’s desperate search for some sense of closure tears her family apart even more than it was before. No matter how hard she tries, she was doomed from the beginning. They all were.
Oct. 20, “The Silence of the Lambs”

Considered one of the greatest psychological thrillers of all time, “The Silence of the Lambs” is a timeless movie.
Oct. 21, “The Omen”

It’s a cheesy love letter to 80s horror starring Mark Hamill having the time of his life. “Child’s Play” fully commits to being pure, unadulterated fun. It knows what it’s doing and you have to give it credit for that.
Oct. 23, “The Babadook”

If you want a movie that’s going to mess you up then this is it. There is nothing more terrifying than watching the aforementioned Babadook come back again and again and again. You should watch this and take the losing of your mind.

Credited for solidifying the final girl trope, “Halloween” is the iconic slasher movie. Its theme and iconography are unmissable, and for good reason. “Halloween” is a masterpiece.
Oct. 25, “Psycho”

Sure you’ve heard the screeching strings and seen the blood in the shower drain, but don’t you want to know the rest of the story? “Psycho” presents a truly terrifying murder mystery full of twists and turns. There’s a reason this is considered a classic.
Oct. 26, “Insidious”

This focuses on a family’s struggle with the paranormal world when their son’s ability of astral projection goes too far. Not only is “Insidious” plain horrifying, it also has a unique story and a great twist!

Every second of “The Texas Chainsaw Massacre” seeks to make you  unsettled. In just the first 20 minutes an ominous horoscope, a disastrous run in with a hitchhiker and a gas station with an empty pump seal the fates of the characters. The uncomfortableness of the first act builds and builds and builds, culminating in a downright terrifying conclusion.
Oct. 28, “The Exorcist”

“The Exorcist” is a creepy and provocative throw back. Taking inspiration from a real possession, it was highly controversial when first released and even banned in some countries. Though it may not make you faint like some audience member did during its theatrical run, it will certainly shake you to your core.
Oct. 29, “Poltergeist”

Submitted by Tyler Lericos
Oct. 30, “Get Out”

This sharp social commentary on the commodification and fetishization of blackness in modern America deserves all the praise it got. “Get Out” gets better upon each viewing, a testament to Peele’s filmmaking. If you’ve already seen “Get Out”, give it a rewatch, and if you haven’t, get ready for a wild ride.
Oct. 31, “It’s the Great Pumpkin, Charlie Brown

It’s cute, it’s sweet, and it’s not scary. It’s Charlie Brown, what more do I need to say?