Honeycomb lab opens to Manual students, even if only briefly 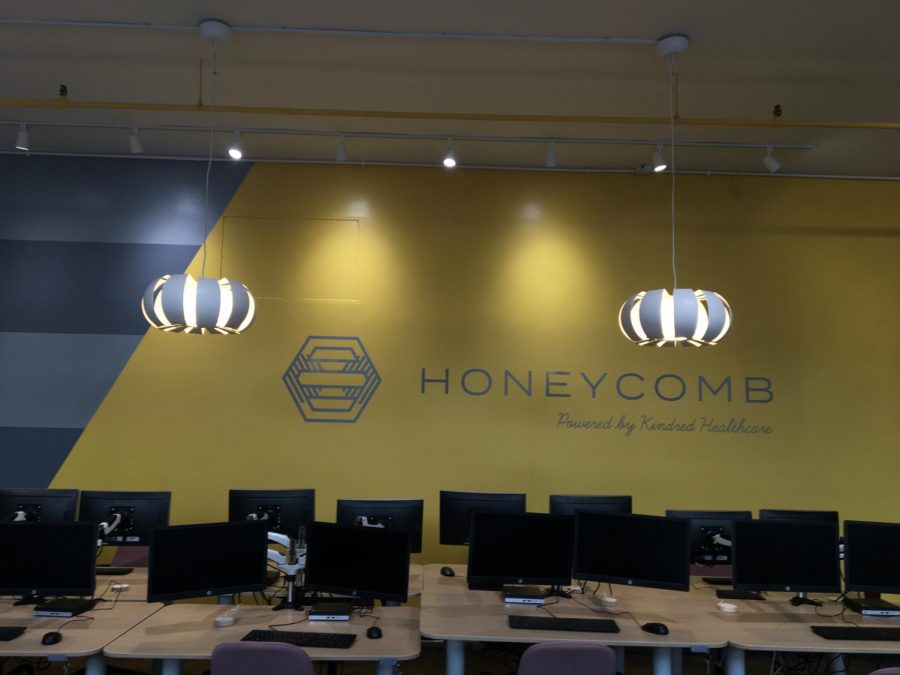 The Honeycomb was designed to be a relaxing, yet modern space for students to explore and learn. Photo by Mandala Gupta VerWiebe

This week, Manual opened its Honeycomb Lab, a partnership with Kindred Healthcare to create a high school equivalent to the Hive, currently stationed on UofL’s campus.

Joshua Lakes, the original designer of the Hive, gave presentations to staff, teachers and students on the new technology available to the school Wednesday.

duPont Manual High School students and staff are excitedly introduced to the new and innovative Honey Comb state of the art Technology Lab, donated and powered by Kindred Healthcare!! pic.twitter.com/AdngjyOvvP

24 stations with dual-display computers, which are stationed on rotatable arms, resting on height-adjustable desks were installed as the main space of the room.

There are two Webex boards, manufactured by Cisco, that are featured, that will allow for teachers to display assignments to students wirelessly. There is also an ability for video conferencing.

As well, there is one computer in the back of the room reserved for higher quality software to allow for photo or video editing.

Lastly, there are four Roku televisions in the front of the room that will be reserved for showing the accomplishments of Manual students from VA art pieces to photos of the soccer team after a big win.

Mr. Adam Wilson (Science, Math) is worried that the technology will not be utilized the most it could be.

The goal of the Hive was to partner with the UofL Speed School of Engineering Students to create technology for the aging population, and it is hoped that it will eventually be implemented at Manual.

“It’s all about Project Based Learning, which all of the magnets are largely doing already. We want to widen it so every class is doing real-world integration in their learning,” Assistant Principal Greg Kuhn said.

Kuhn wants the space to be open to all of the teachers, so it doesn’t become dominated by one magnet or subject.

“To me, I’m just trying to find the difference between the MAC and the Library. It seems like the technology is there but there’s no way to to make their usage obviously different,” Katie Cummins (11, J&C) said.

Kuhn also wants to avoid the possibility of the Honeycomb becoming another MAC Lab or Library. There’s no printing station because it’s not another place for students to come to finish up homework.

“Even though MAP testing is a capability on the computers, the Honeycomb will not be another computer lab. Hopefully,” Kuhn said.

The hallway that the Honeycomb is inside will have to be closed in a couple of weeks after its opening due to the renovation.

Originally the Honeycomb was not going to be possible due to the renovation, and the delicate technology that would be installed.

However, the construction team agreed to allow it, and there was a compromise to not drop the ceiling, to only take out the wall HVAC systems and to finish with the installation of two new vents.

After construction, the Honeycomb will then be occupied by Ms. Laura Moore (Computer Science), who will explore the capabilities of the Honeycomb while her room is being renovated.

“After a period of planning, the Honeycomb will be open to students and teachers to use it to its full potential,” said Kuhn.

The Honeycomb is across from Room 232, where students are encouraged to pass by and take a peek through the doors.