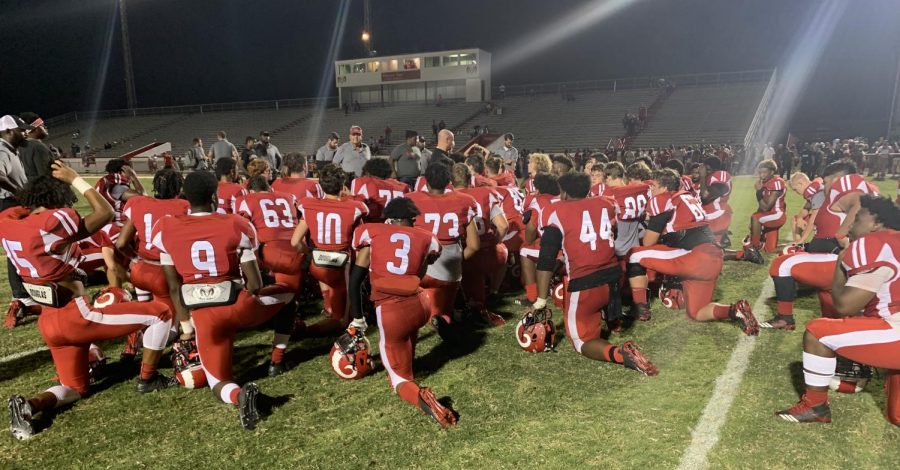 The team has a post game huddle already planning their next win. Photo by Wisal El Majbri

Manual’s offense stepped up and defeated North Bullitt last night with a score of 42-3. The team hit it off strong with 6 touchdowns and a solid defense throughout the game. North Bullitt scored one kick after their fourth down in the first quarter.

First Quarter
Manual started off playing a solid defense controlling Bulitt Norths attacks and within minutes of the game, Manual’s Jawaun Northington (10, #22) scored a 76 yard touchdown. They made the kick, bringing the score to 7-0.

Manual’s defense held pretty steady throughout but after the fourth down Bullitt’s R. Hill (11, #10) completed a kick and the score goes 7-3.

Near the end of the quarter, North Bullitt recovered a Manual fumble to give them possession of the ball.

“We messed up on turnovers and practice makes perfect,” Ramont Townsend said.
Second Quarter
Despite facing opposition from North Bullitt’s defense in the second quarter, Manual played an aggressive offensive style, including going for it on fourth down.

Later on, Jawaun Northington (10, #22) picked up a loose ball and scored a 14 yard touchdown. Manual led 20-3 after a successful kick.

Following the touchdown the team lagged a little compared to first quarter and an attempt to punt the ball at the 40 yard line failed at the end of the quarter.

“We need to work harder and we need to play every team like they’re the best team in the state, and we don’t take any practices or days off,” Jawaun said.
Halftime
During halftime, Manual’s Dazzlers and the Crimson Sound performed. The halftime highlight however, was honoring the 1959 state championship football team.

Their team managed to beat Male for the first time in 10 years in a near perfect match with a score of 65-0. The team had been the top ranked team in Kentucky and winners of the AAA state championship; many of the players even continued on to play professionally and coach.

Together they reunited to return to the same fields where they had pulled off an incredible win against Male, one of the biggest in Manual history.

After a few possession changes, Manual’s Sean Squires (12, #16) scored an 11 yard touchdown. They made the kick bringing the score to 30-3. After the kick, Northington intercepted a pass on second down.

Then, Manual’s Braxton Canon (11, #9) scored a 5 yard touchdown, however, the kick is incomplete and the third quarter ends off with a score of 36-3.
Fourth Quarter
In the final quarter Manual scored the last touchdown of the game. Curtis Rearden (10, #12) scored a 13 yard touchdown with an incomplete kick bringing the score to 42-3, Manual.

“We just did okay, we kind of fumbled and stumbled around there a little bit but we were able to make enough big plays to put the score in our reach.” Coach Scott Carmony says.

Manual’s next game will be at Eastern next Thursday at 7.