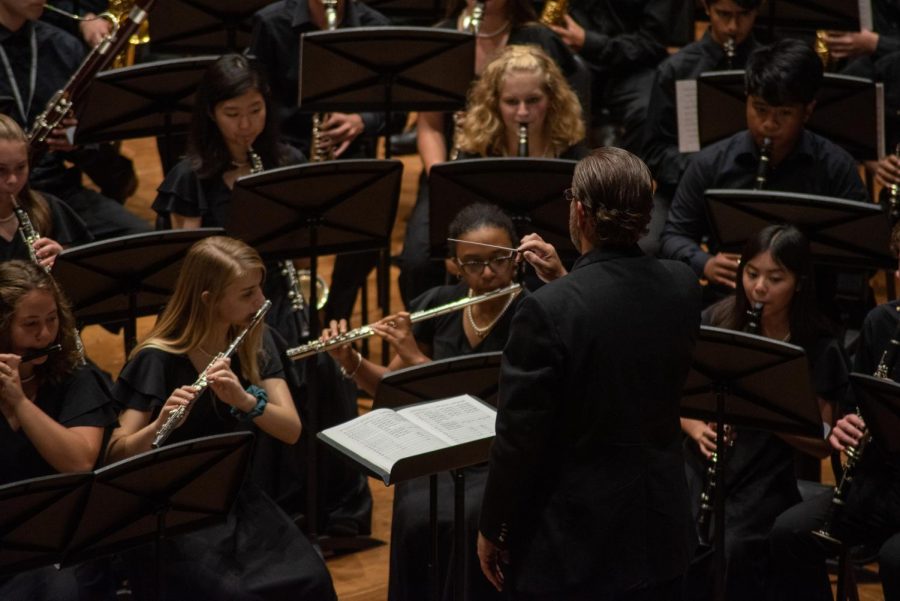 Mr. Jason Gregory acts as the conductor to the YPAS band as they perform in the Prism Concert. Photo by Cesca Campisano

The Youth Performing Arts School (YPAS) put on its 11th annual Prism concert on Oct. 2 and 3, a production put on by the entirety of the music department.

This is the only concert of the year where the piano, orchestra, vocal, band (including jazz and percussion ensembles) and guitar departments perform alongside the marching band.

Tomorrow night is our music department’s annual Prism Concert! This is your only opportunity this year to catch each music department in one single performance. See below for more information! pic.twitter.com/UQsBtazOsR

Matilda Ertz, the chair of the music department at YPAS, has been putting on the Prism concert for the last five years.

“It is one of the best concerts we do because it involves all of the departments. It is also a lot of movement of students on and off stage, which takes immense planning and coordination,” Ertz said.

The Prism concert was shown once during the day and once at night, hosting a variety of audiences including middle schoolers from magnet schools studying performing arts.

“All in all, it is a great way to show future students, current students, parents, teachers and the community the excellence of YPAS music,” Ertz said.

The Prism concert is a great chance for both the YPAS teachers and faculty to showcase what their students are learning as well as give students an opportunity to have a meaningful and fun chance to see what their own magnet is doing.

“Performing at any concert is an amazing experience. The Prism Concert is different though, because it’s so inspiring to see so many of us going out and making music and doing what we love. This concert is a way for us to remember why we do what we do,” clarinet player, Matthew Goode (11,YPAS) said.

The concert is hoping to grow in the future so more people in Louisville’s community have the opportunity to see what YPAS is doing and the importance of collaboration, especially in the arts.

“Some thoughts for the future are to make the concert more accessible to all, possibly streaming portions of it, and to collaborate even more between departments,” Ertz said.