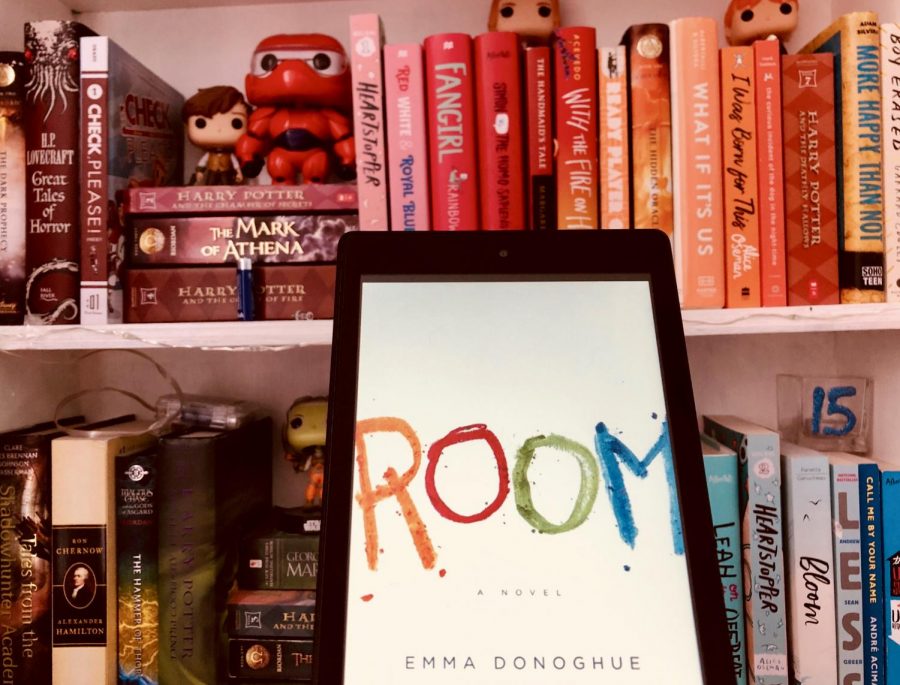 Note: This review does contain minor spoilers to both “Room” the book and movie. If you wish not to read the spoilers, you should not read past “The book vs. the movie”

11 feet by 11 feet. The walls are lined with soundproof material, and the ceiling has a tiny skylight– the only glimpse into the outside world. The door is always secured with a keypad that the inhabitants don’t know the password to. Inside there’s a small kitchen, a television, a bathroom, a bed and a wardrobe. To us, it feels like a living nightmare, but to five-year-old Jack, it’s all he’s ever known.

Emma Donoghue’s “Room,” tells the story of a young woman, Ma, and her son, Jack, as they are trapped within the small confines of a shed in the backyard of Ma’s kidnapper. Upon Jack’s fifth birthday, Ma begins plotting their escape out of the room she has been trapped in for eight years. Through Jack’s narration, readers of “Room” will experience a story about parenting and get a true appreciation of freedom and the world around us, even if the story lags and falls off at some points.

I’m five, so I know everything now
“Room” takes a unique perspective of the “kidnapped and held captive” story by telling the story through Jack’s perspective. Because Jack is five years old and has only ever known Room, you learn about Ma’s parenting in the way she sets up the world for Jack. To Jack, the real world is the room, which is why he calls everything by its name, and every object is a proper noun, as if the one Jack knows is the only one that exists (the room is Room, the sink is Sink, the bed is Bed, etc.). Everything else exists only in the TV. Ma also chooses to tell Jack stories about various topics. After he turns five, however, she begins to tell him stories about her old life, giving the reader an insight on how she got taken and what’s happened to her in Room.

Donoghue tells the story through Jack’s eyes extremely well and in doing so has to go through the mind of both Ma and Jack but manages to keep the central focus on Jack. This can be both great and painful for the reader, as events that don’t involve Jack directly, like Ma’s meetings with Old Nick, are only told through what he can tell is going on through the wardrobe where he sleeps. While some events are hard to wrap your mind around, it’s fascinating to see this situation through the mind of a five-year-old. It also keeps the book somewhat light-hearted for such a heavy topic.

While the book has many great elements, and the story between Ma and Jack is fairly wholesome with how much they rely on one another, the book is extremely bittersweet in its message. Personally, the end of this book left me with the thought that the world is nothing but repetition, and it’s the same things no matter where you go. Jack is underwhelmed by the world and only wants to stay in Room, which I found to be very disappointing. In addition to a melancholy message, the story is anticlimactic, aside from the middle, and the end seems to jump off the deep end. It doesn’t make much sense, and I found it hard to find much correlation between events in the final third of the book. There was also a lot of set up for symbolic scenes that would have acted as a great conclusion, but Donoghue didn’t include those scenes at all.
The book vs. the movie
This section will contain spoilers for “Room.” Read at your own pace.

“Room” is not only a book, so if reading is not your forte, you can luckily watch the 2015 movie adaptation. This adaptation stars Brie Larson as Ma, who is given an actual name in this version, Joy, and Jacob Tremblay as Jack. Both actors won awards for their roles in the movie with Larson winning multiple awards for Best Leading Actress and Jacob winning a Critics Choice Award.

The movie, in my opinion, does a much better job at telling the story that I believe Donoghue was aiming for, and it tells a more clear-cut story that makes sense from a viewer perspective. The movie cuts out many elements from the book that make the story somewhat confusing and overwhelming and ends with a much happier message about the world being a huge place to explore and notice new things. The movie also reminds viewers about how lucky we are to be free and not locked in a place like Room.

One of the most notable changes is Jack’s development after escaping Room. In the book, he is very selfish and doesn’t want to enter the world or help out Ma. Jack, up until the end of the book, wants to stay in Room and throws tantrums, still acting like a small child. This contrasts to other parts of the book where Jack is shown to be very mature for five years old. To my surprise and enjoyment, this is changed in the movie to show Jack  developing and growing outside of Room.

The movie also shows clear correlation between events that the book blurs at some points. For example, the movie shows how the events before Joy attempts suicide impact her and why she eventually attempts to harm herself, while the book doesn’t clearly explain. This made the actual event a huge shock for me while reading the book. The experiences were vastly different for me, which makes looking back on the experiences so difficult to wrap my mind around.
Goodbye Room
“Room” is an amazing story with great storytelling and an even more polished feel in the movie. It captures the struggles that one wouldn’t typically think about in a kidnapping situation, especially with having a son to raise. It’s a thought provoking story that will keep you thinking about Jack and Ma in more ways than one. It’s especially mind consuming when you remember that there are thousands of people in the world who are going through, have gone through or in the future will go through a situation identical to this one.

I highly recommend this book, as it’s a quick read and a powerful story that will likely stick with you for a long time to come. If you are interested in hearing from more people about this book, book club will be meeting this Friday, Oct. 11 to discuss it and pick a new book for next month.