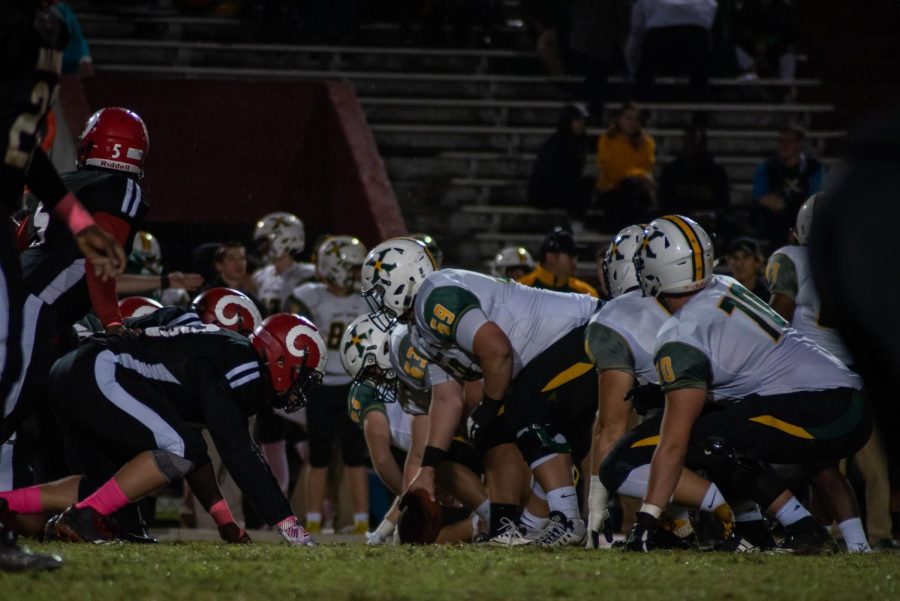 St. X prepares to snap the ball to the quarterback to start the play. Photo by Cesca Campisano.

The Manual Crimsons (6-1) defeated the St. Xavier Tigers (4-3) 20-19 last night after a huge boost in offensive momentum in the second half. This is the first time the Crimsons have defeated the Tigers in 26 years.

Manual defeats St. X 20-19 after a strong offensive momentum in the second half. pic.twitter.com/tEAAy73faJ

“This win means everything to us. We’re leading for the district championship which is always our number one goal,” Manual head coach Scott Carmony said. “In the second half, we were able to just really carry the ball and do some of the things we really wanted to do and have been working on.”

During the second half, carries by JaWaun Northington (#22, 10) and DeAaron Robinson (#20, 12) led the Crimsons down the field — twice. Northington made two carries from the 4-yard line to score Manual touchdowns during the fourth quarter.

Before the last two Crimson offensive drives, which had Manual trailing 19-14 and then leading 20-19, St. X punted the ball and the Crimsons never looked back.

Zach Recktenwald (#17, 12) helped facilitate the success of the last offensive drive of the game for the Crimsons with a 24-yard pass to Tavon Johnson (#11, 10). Before that drive, Robinson passed for 57 yards to Braxton Cannon (#9, 11) to put Manual in prime position to carry the ball in small increments until they hit the end zone.

“Coach Carmony told us something in the locker room [during halftime] that I can’t really say out loud, but it really touched our hearts,” Robinson said, referring to the offensive momentum in the second half. “I’ve been wanting to beat St. X for four years, my tears really tell you something.”

St. X had one last chance to score with 3 minutes remaining in the game when they got possession of the ball following Manual’s two touchdowns until Eli Blakey (#1, 11) caught an interception near the Manual 40-yard line to make the outcome all but certain for the Crimsons.

“This is a big bounce back. We worked so hard all week for this game,” Blakey said. “We don’t give up. The first half was kind of rough for us but we really bounced back and realized that we wanted the win way more than they [St. X] did.”

Manual’s offense started off slow in the first half. Manual’s only touchdown during the first two quarters came from a botched St. X handoff allowing Malachi Lawrence (#21, 11) to recover a fumble and run in for a touchdown.

For the most part, Manual’s red zone defense came in strong all game. St X.’s Jeffrey Sexton (#2) kicked four field goals as a result of Manual forcing a fourth down in field goal range.

Manual’s running-backs stepped up huge this game, including Robinson’s 57-yard pass to Cannon, yet St. X relied heavily on a quarterback draw formation where Douglas Bodhaine (#15) carried the ball 18 times to make significant offensive progress down the field.

St. X’s only touchdown of the night came from Logan Davis’ (#32) 19-yard carry where he slipped past the Crimson defense. He carried 24 times for 119 yards.