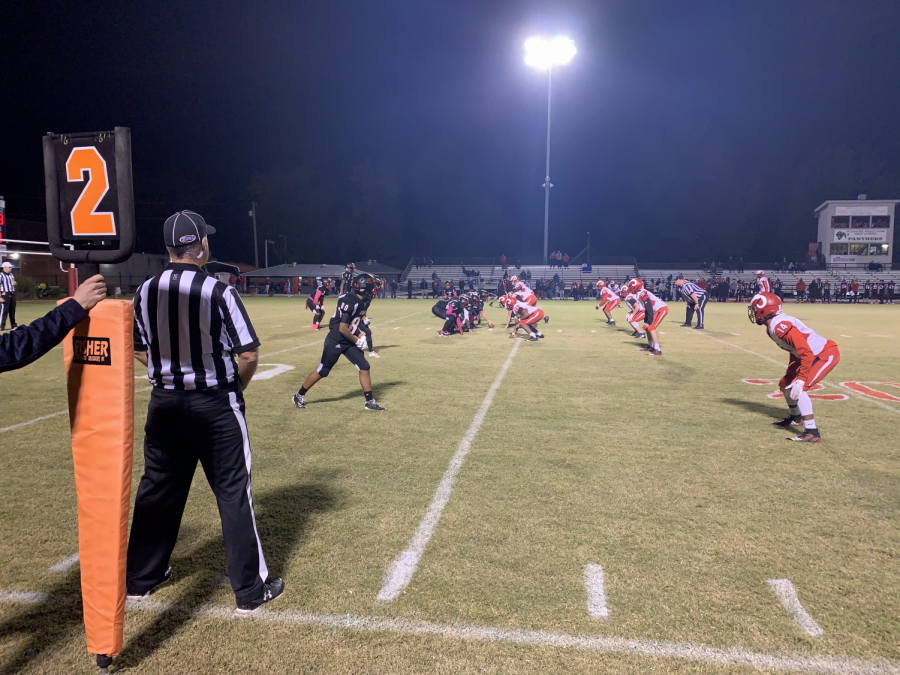 Manual put in some of their younger players during the second half. Late in the fourth quarter, PRP was trying to find a hole in Manual's defense. Photo by Reece Gunther.

Manual (7-1) defeated the Pleasure Ridge Park Panthers (2-6) last night with a score of 48-6. Manual’s offense came out swinging from the start, and the Crimson defense prevented the Panthers from much offensive action throughout the night.

Manual football is set to face off at Pleasure Ridge Park tonight at 7:30. Stay tuned for live updates. pic.twitter.com/ErZ15I6aKJ

Manual head coach Scott Carmony described the game as straightforward and said that the main takeaway of the night was that they “took care of business.”

JaWaun Northington (#22, 10) scored three rushing touchdowns. Early in the first quarter, he ran for 63 yards to give the Crimsons a 7-0 lead. Later on, he ran in for a six-yard touchdown and shortly after halftime ran for 16 yards to score his third and final touchdown of the night.

DeAaron Robinson (#20, 12) scored two touchdowns. His first was a result of a pass from Zach Recktenwald (#17, 12) for 23 yards. On the next down, Robinson carried for two yards to the end zone. Recktenwald later passed for several yards to Sean Squires (#16, 12) allowing Robinson to carry 13 yards for his second touchdown of the evening.

Ramont Townsend scored one touchdown  with an 11-yard carry as he pushed through the Panther defense, able to stay upright even after several players attempted to tackle him.

Manual began to play many of their younger players during the second half, presumably because they were so far ahead. Tavon Johnson (#11, 10) ran 45 yards for a Crimson touchdown and they allowed freshman kicker Zach Hutchinson (#35) to take the PAT, whereas in the first half Patrick Holdener (#88, 11), Manual’s starting placekicker, attempted them all.

“That was really good to put those players in. It’s always good to do that. I was very happy with their performance,” Carmony said.

In the first half, the Panthers didn’t seem to know how to move the ball down the field at all. In many of their drives, they would have numerous penalties called on them, pushing the ball back. Manual’s defense also came hot and heavy and before halftime, many of their punts were from around fourth and 15.

PRP also struggled to put a halt to Manual’s run game, especially during the first half. Even when Manual put in their younger players, it seemed like a fairer game, but Manual was still clearly dominating the PRP defense. Most of Manual’s carries were five yards or over.

“We did our thing. In the second half, we came out and dominated. These are the kinds of things we need to win district,” Johnson said.

The Panthers’ only touchdown came from a quarterback draw when Maurice Sodja (#1) ran in to the end zone, making the score 41-6 with an unsuccessful extra point.

Manual will play their last regular season division game next week at Butler (4-4) at 7 p.m.