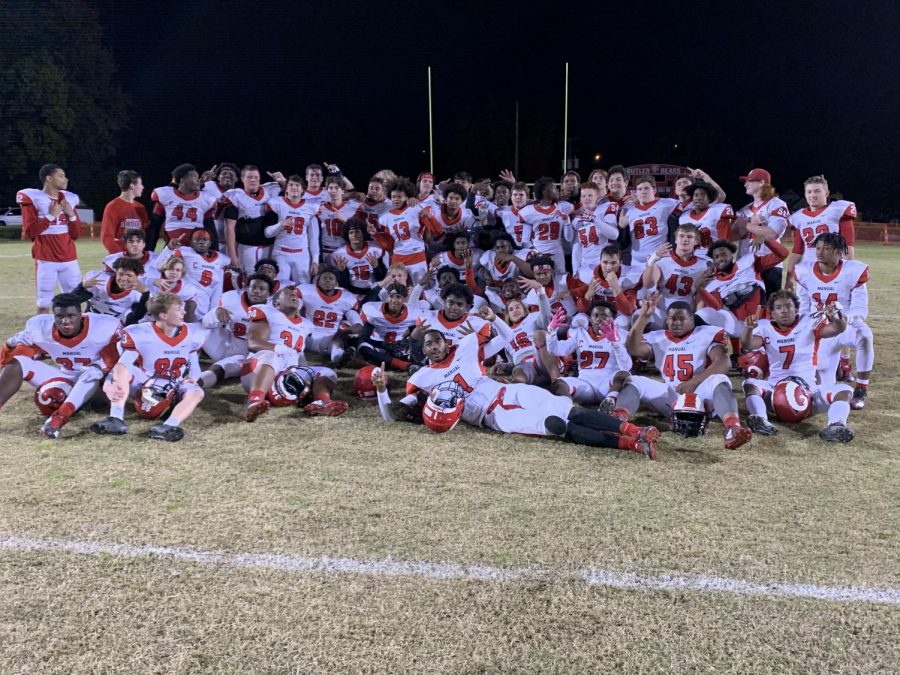 Last night, Manual (8-1) defeated Butler High School (4-6) with a final score of 34-6  to win the regular season Class 6A District 3 championship. This is the first time in over 30 years that Manual has won their district.

FOOTBALL: Your Class 6A District 3 regular season CHAMPIONS!! It is believed that this is Manual’s first district championship in 30+ years!! pic.twitter.com/ugrXc0QQ9l

First half:
Within the opening minutes, Manual forced Butler to a fourth down without any gains after the kickoff. Following this substantial defense, which ultimately set the tone for the game, Jawaun Northington (#22, 10) scored the first touchdown during Manual’s first offensive possession.

Throughout the remainder of the first half, Manual continued to uphold their stellar defensive pressure against Butler’s offense. There were stretches of back to back possessions where Butler’s offense was forced to make incomplete passes resulting into fourth downs. Manual’s presence on defense essentially lead to Butler’s inability to score for the the whole first half.

As the half went on, the game began to get more intense. There were moments when players would “trash talk” back and forth after a tackle, incomplete pass  or even a rush on offense. To contribute to the emotions of the game, the referees made various incorrect calls throughout the game. Many of the flags called on the play were against Manual. On one particular call, the referee penalized Manual for having “too many players on the field,” when in fact Manual had ten players instead of eleven by the time Butler began the play.

Manual’s second touchdown of the half came after Eli Blakely (#1, 11) received a 19-yard pass from quarterback, Zach Recktenwald (#17, 12). By the end of the first half, Manual looked strong,  leading Butler 14-0.
Second half:

During the beginning of the third quarter, Manual had multiple relapses on both sides of the ball. This allowed Butler to gain some momentum and score their first touchdown of the game by C. Burks (#13, 12). Offensively, Manual lost a few yards when a Butler player was able to bat down a Manual pass immediately following a string of other broken up passes.

“This week we plan on fixing the dumb penalties, the fumbling and playing just not smart football,” Manual’s  head coach, Soctt Carmony, said.

Rounding off the third quarter, DeAaron Robinson (#20, 12) ran 56 yards for a first down, but the time expired before Manual could score.

In the start of the fourth, Tavon Johnson (#11, 10) defended against Butler’s attempted eight-yard rush after a punt return. These two plays seemingly shifted the mood of the game back into Manual’s favor.

In the fourth quarter, Manual scored three touchdowns to secure the win. The first touchdown was by Jawaun Northington (#22, 10) running a short 15 yards, making the score 20-6. Following Northington’s touchdown, Ramont Townsend (#5, 11) rushed a three yard touchdown, racking the score up to 27-6  for Manual.

The last scoring play of the game was by Tavon Johnson (#11, 10) making the final score 34-6 with Manual as the district champions.

Touchdown Crimsons! @JawaunNorthing4 runs it in from 15 yds out. XPt fails. Manual leads Butler 20-6 with 9:53 remaining in game.

The team was very excited about the night’s win and their new title of district champions, which they earned for the first time in three decades. Next week the Crimsons will take on the Male Bulldogs in their rivalry game. The team has high hopes for their game next week and believes that winning the district gives them an important confidence boost.

“It never hurts to go into a big game off a win, especially a district championship game,” Coach Carmony said.

Manual will take on Male at Manual Stadium next Friday at 7:30 p.m. Be sure to follow Manual Redeye Sports on Twitter for live updates on the game.