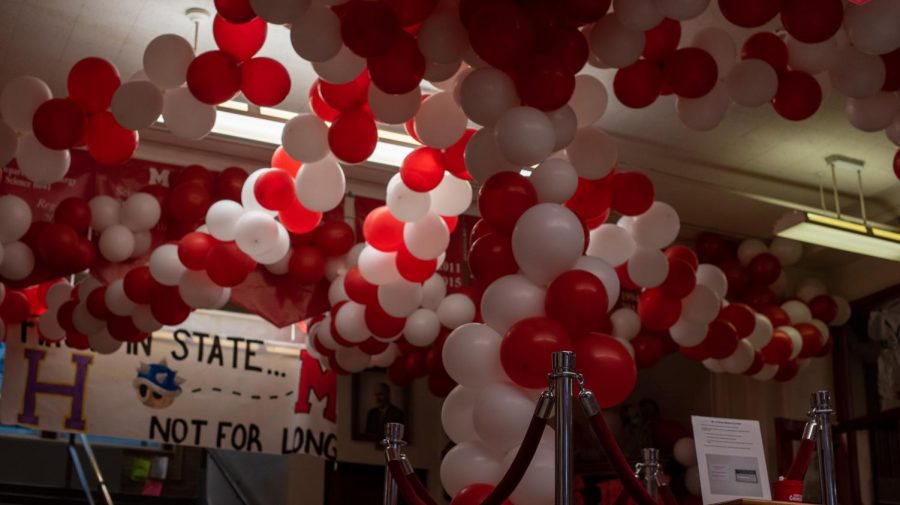 In center hall, the balloons come to hang down in the roped area at the front of the school. Photo by Cesca Campisano

There are a lot of fundamental components to Red/White Week, but perhaps one of the best parts is the balloons and posters that Executive Council hangs up around the school. These students spend hours upon hours creating and hanging up decorations around the school the Friday night before the weekend before Red/White Week.

This year though, the decorations look a little bit different compared to years past.

The renovations caused a couple of changes in the layout of the decorations including how and where they’re hung up at.

“We had to change how we were going to decorate the halls because of the lowered ceilings,” said Ofelia Mattingly (10, J+C), a member of Executive Council. “We wanted to be consistent with how it was going to be arranged where the ceilings were lowered, so the way it is set up is the same everywhere,” said Mattingly.

Perhaps one of the most notable changes is the balloons, which vary in the way they are hung up depending on where you are in the building. On the east side of the school, where the majority of the renovations were this past summer, the balloons hang on each side of the wall in little bundles of balloons. In other parts of the building though, they’re hung up as they have in years past with a zigzag design, being strung from wall to wall in a big chain.

Furthermore, the lower ceilings made the posters hang a little lower than they have in the past. This means fewer posters were hung up on the ceilings, but there are still many hung up around the building.

“Figuring out a way to set up the decorations was the only difficult part about setting up the decor,” Mattingly said.

Other than this minor challenge, Executive Council didn’t face many challenges in planning for Red/White Week besides their normal yearly stress to get everything done for the school in time.

“I liked setting up everything, even if it was tiring and a pain to do. It was fun to do with everyone. It got a little hectic towards the end trying to set up the center hallway on the first floor because it was late and we ran out of tape, but it was kind of funny,” Mattingly said.

It is likely that as Manual gets more renovations over this year and summer of next year, the decorations will continue to change in arrangement, but you can bet Executive Council will work hard every year to make sure the school is all decked out for Red/White Week.