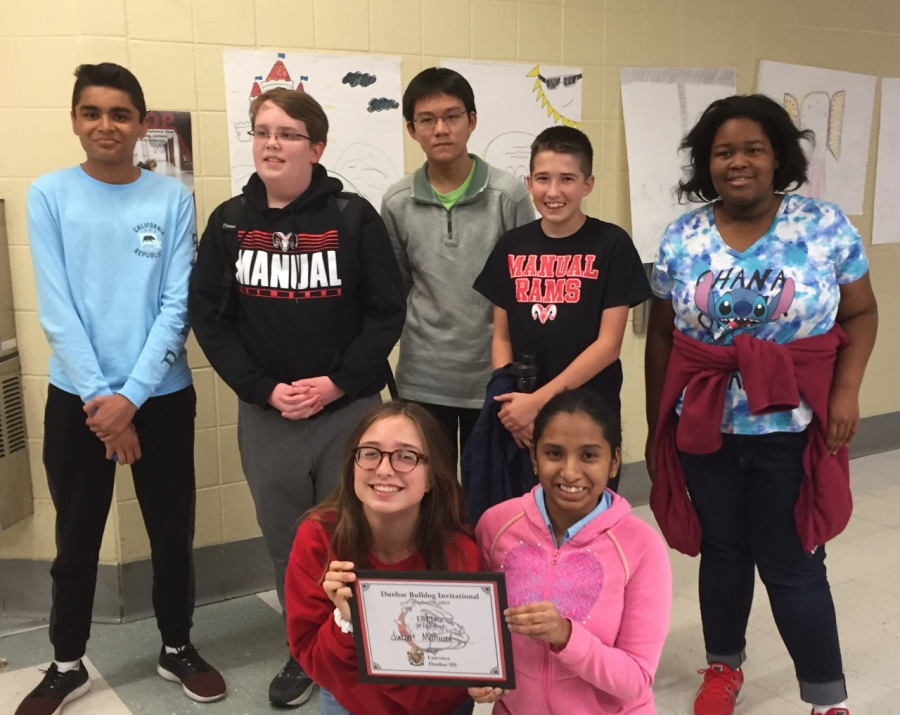 Manual’s JV quick recall team won the annual Bulldog Tournament this past Saturday in Lexington, Kentucky, competing among  sixteen powerhouse teams from across the state.

Members come from several different magnets, and each student was able to contribute an answer that gave them the points to win the competition.

The team’s sponsor, Mrs. Rich (Science) was proud of what the kids accomplished.

“As we were leaving, the tournament director even made it a point to tell me that our team received a lot of compliments about sportsmanship,” she said. “It’s nice to know that victory and humility can coexist.”

Quiz bowl is similar to quick recall, with the only difference being the questioning format.

To prepare for the competitions, the team reads questions from all sorts of categories that could have the potential to appear in one of the several tournaments they attend a year.

“We try to find out our strengths and our weaknesses [looking at questions],” Mrs. Rich said. “We’re not very good with sports sometimes, so we have to learn about sports teams and sports stats.”

Team captain Lauren Jones (9, MST) has been doing quiz bowl and quick recall competitions since the fourth grade, and was pleasantly surprised by the team’s win.

“I’m very happy that we won,” she said. “I didn’t know if we were going to because there were so many other schools with really talented teams, and we were just freshmen, but we were able to pull it out.”

The team has a few tournaments lined up for the rest of the season— if they keep up their winning streak, they will be entering in competitions out of state.

Along with the winnings, members enjoy the team and tournaments because of its educational benefits.

“It’s a great way for me to my knowledge up and keep myself informed on certain things,” Jones said. “Overall, I just really enjoy it.”