A guide to Kentucky’s 2019 elections 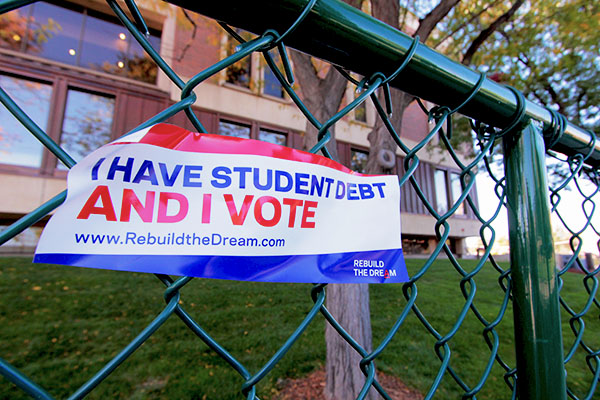 Students are using the 2012 presidential debate to showcase their opportunity to vote.

On Tuesday, November 5, Kentuckians will go to the polls to elect several statewide constitutional officers, including the Governor, Lieutenant Governor, Attorney General and more.
Governor & Lieutenant Governor
The governor serves as the state’s executive. The governor signs or vetoes laws passed by the legislature can appoint cabinet officials and can nominate judges. However, the governor’s veto can be overridden by a simple majority vote in both legislative bodies. The lieutenant governor serves in place of the governor if he or she dies or becomes incapacitated.

The incumbent Republican Gov. Matt Bevin is seeking reelection and is being challenged by the Democratic nominee, Attorney General Andy Beshear.

Bevin has served as Kentucky’s governor since 2015, when he defeated the Democratic candidate, then-Attorney General Jack Conway, by a larger-than-expected margin. During his tenure, Bevin has prioritized reducing income taxes, introducing right-to-work legislation, passing pro-life legislation, addressing the pension crisis and reducing the size of state government.

However, Bevin’s tenure has been mired by public feuds with public school teachers, first responders and other public employees. Bevin is also depicted as one of the most unpopular governors in the country by some polls, the most recent of which showed the governor with an approval rating of 34% and a disapproval rating of 53%.

Bevin has selected physician and state Sen. Ralph Alvarado as his running mate, replacing incumbent Lt. Gov. Jenean Hampton after a public feud between herself and the governor. If elected to a second term, Bevin would prioritize protecting coal jobs, implementing charter schools and reforming the state’s pension system.

You can find more information about Bevin’s campaign at mattbevin.com.

Beshear has served as Kentucky’s attorney general since 2015. Beshear is also the son of Bevin’s predecessor, Steve Beshear. As Attorney General, Beshear has focused his efforts on suing opioid manufacturers, ending the state’s rape kit backlog and pursuing litigation to overturn state laws including pension reforms and changes to the state’s healthcare system.

You can find more information about Beshear’s campaign at andybeshear.com.
Attorney General
The attorney general serves as Kentucky’s most powerful lawyer and represents the government in legal challenges. Kentucky has not elected a Republican attorney general since 1944.

Stumbo served as Kentucky’s attorney general between 2004 and 2008 and as Speaker of the Kentucky House of Representatives from 2009 to 2017. During his previous tenure as Attorney General, Stumbo sued opioid manufacturers, fought against “pill mills” and carried out an investigation against then-Governor Ernie Fletcher’s hiring practices.

If elected, Stumbo would increase accessibility to the Attorney General’s office, combat child predators and continue to litigate against opioid manufacturers.

You can find more information about Stumbo’s campaign at stumboforag.com.

Cameron previously worked as a legal counsel to Sen. Mitch McConnell and played football for the University of Louisville. Cameron faced a legal challenge that asserted that he lacked the qualifications to serve as Attorney General, but a Jefferson County Circuit Court decided in favor of Cameron.

If elected, Cameron would pursue a close relationship with the Trump Administration, increase the statewide presence of his office and serve as an independent prosecutor.

You can find more information about Cameron’s campaign at cameronforkentucky.com.
Secretary of State
The Secretary of State manages elections, maintains the records of corporations and businesses and issues various licenses, including to notaries public.

Incumbent Democratic Secretary of State Alison Lundergan Grimes is term-limited and cannot seek reelection to a third term. The Democratic nominee is former Commissioner of Veterans Affairs Heather French Henry and the Republican nominee is Michael Adams, a former aide to Sen. Mitch McConnell and a consultant for the Republican Governors Association.

If elected, Henry would restore voting rights to non-violent felons, implement measures to protect the integrity of voting machines and expand civics education in schools.

You can find more information about Henry’s campaign at supportheatherfrenchhenry.com.

Adams served as General Counsel for the Republican Governors Association for 12 years, worked in the United States Department of Justice under the Bush Administration and worked for Sen. Mitch McConnell and Gov. Ernie Fletcher.

If elected, Adams would make a law requiring a photo ID to vote, allow changes to party affiliation until the registration deadline and allow voting by mail.

You can find more information about Adams’s campaign at michaelgadams.com.
Auditor
The auditor manages state funds and can issue audits, or official investigations, into government fiscal management.

Harmon has served as auditor since his election in 2015 when he defeated the then-incumbent Adam Edelen. Harmon previously served as a state representative from the 54th district.

If re-elected auditor, Harmon would continue ongoing audits into various state agencies, including the Kentucky Retirement Systems and the Department of Fish and Wildlife and would work to stop the “abuse” of taxpayer dollars.

You can find more information about Harmon’s campaign at mikeharmon.com.

Donahue has spent most of her career working with the U.S. Navy as an engineer. She also ran for the 36th Senate district in 2018 but was defeated by incumbent Julie Raque Adams.

If elected auditor, Donahue would seek to increase statewide cybersecurity and would work to develop a closer relationship between the auditor’s office and the community.

You can find more information about Donahue’s campaign at donahueforky.com.
Treasurer
The treasurer maintains a record of the state’s payments and dues, can make payments on the state’s behalf and manages the state’s monetary reserves.

The Republican nominee is incumbent Allison Ball and the Democratic nominee is bank manager Michael Bowman.

Ball has served as treasurer since 2015. During her tenure, she lobbied for a bill to mandate all Kentucky high schoolers to take a financial literacy course and fought numerous attempts at tax fraud.

If re-elected treasurer, Ball would work to ensure transparency in the state government’s taxation and expenditure and would continue her efforts to eliminate barriers for Kentuckians with disabilities seeking to become financially independent.

You can find more information about Ball’s campaign at ballforkentucky.com.

Bowman has spent his career as a bank manager and as a Legislative District Chair for the Louisville Democratic Executive Committee.

If elected treasurer, Bowman would work to prevent politicians from abusing the state’s treasury and would advance policies that would strengthen Kentucky’s job market.

The Republican nominee is incumbent Ryan Quarles and the Democratic nominee is former Scott County Board of Education chairman Robert Haley Conway.

Quarles has served as Kentucky’s agriculture commissioner since 2015. During his tenure, Quarles expanded the state’s hemp industry and reduced the agriculture department’s spending.

If re-elected, Quarles would work to fight food insecurity in Kentucky’s cities and rural areas and would ensure farmers would be represented in any international trade negotiations.

You can find more information about Quarles’s campaign at ryanquarles.com.

If elected, Conway would work to revitalize the state’s contracting agricultural industry and would encourage the legislature and governor to pass a bill legalizing medical marijuana.

You can find more information about Conway’s campaign at conwayforky19.com.

Additional offices may be on the ballot depending on county and precinct.