The 2019 Kentucky election results are in? 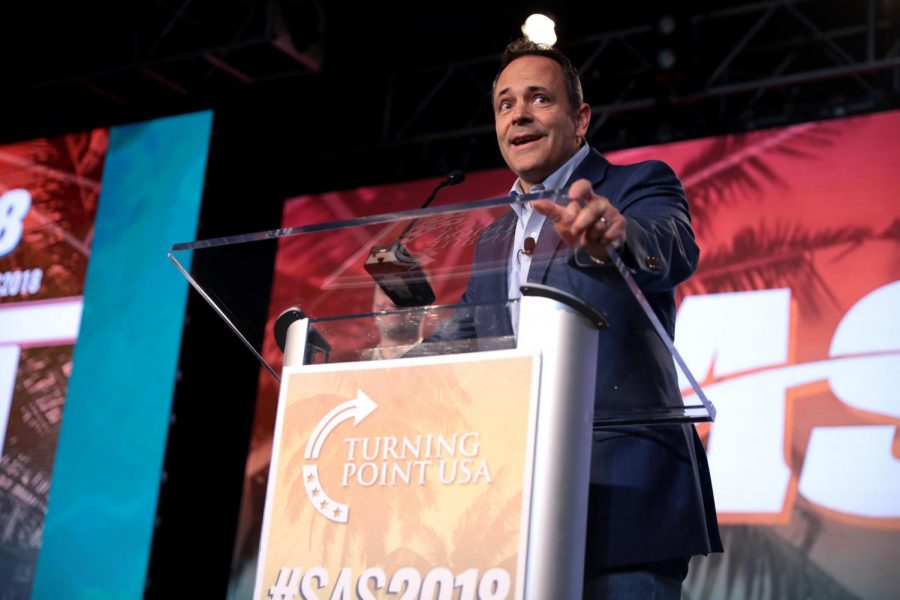 Bevin addresses the crowd at a student-oriented economic summit earlier this year.

Though Attorney General Andy Beshear has declared victory and leads by a 5,000 vote margin, the result of the 2019 Kentucky gubernatorial election is still unclear.

MSNBC and NBC have declared Beshear the winner, while Associated Press and the New York Times said the election was too close to call.

Incumbent Governor Matt Bevin has yet to concede the election to Beshear and has requested a recanvass of the vote.
Recanvassing
Not to be confused with a recount, recanvassing means voting receipts would be reprinted and checked.

“We want to ensure above all else that the integrity of the process is a good one,” Bevin said.

Bevin cited “significant irregularities” and alleged voter fraud without providing data to back up his claims.

Bevin: There were a number of irregularities. He’s not giving any specifics…. yet again. pic.twitter.com/QFyNKFhe7i

Robert Stivers, Kentucky President of the Senate, voiced support of Bevin’s formal request for a recanvass. Stivers also said the election could be determined by the state legislature.

If Bevin contests the results of the election to the state board of elections by Nov. 25th, the state legislature will determine the winner of the election. The Republican Party controls the majority in both the House and the Senate.

The recanvass will take place on Nov. 14th.
What does this mean nationally?
Many national news organizations, including the Washington Post and MSNBC, claim Bevin’s loss means Trump’s 2020 prospects are uncertain in Kentucky. MSNBC affiliate Jesse Rodriguez’s tweet regarding Bevin and Trump blew up:

Matt Bevin (R) was ahead by 5 points in polling just before Trump’s rally in Kentucky last week pic.twitter.com/RA999nXF9q

However, Kentuckians are pointing out that Beshear won by less than 1% of the vote against a widely disliked governor, by no means a landslide victory.

A 2019 Morning Consultant poll reported Bevin had the second lowest governor approval rating in the nation.

This election showed that a Democrat could barely beat one of the most disliked political figures in U.S. politics, not that the Democratic party has the potential to flip Kentucky in the presidential election.
What does this mean for Kentucky?
The state board of elections along with Secretary of State Alison Lundergan Grimes stand by the results of the election.

Assuming Bevin doesn’t contest the election, it appears Beshear will be governor.

Though the governor’s seat has flipped, Republicans still hold a majority in Congress and won Attorney General, Secretary of State, Auditor of Public Accounts, State Treasurer, Commissioner of Agriculture, and both special elections for House seats.

Beshear will likely veto many Republican proposals, and veto override attempts along with the courts will determine what legislation will pass.
What does this mean for Manual?
Due to his support for teachers during the sick outs, many teachers are satisfied with Beshear’s apparent victory.

“We believe the people of Kentucky have spoken Educators came out in force to change the negative public education policies espoused by Matt Bevin. We look forward to the final official count,” said Eddie Campbell, President of Kentucky Education Association (KEA).

The Manual community seems a little more hesitant to celebrate.

“Nothing’s official yet but we’ll have to wait and see,” Dr. Randoph Wieck (Social Studies) said.

Wieck has filed three lawsuits over Kentucky teacher pensions and has been an outspoken critic of Bevin and the Kentucky Teacher Retirement System. As results were coming in Tuesday night, Wieck wrote this blog post.

“Based off the results of the election being literally all Republican I think the outcome might have been more a result of everyone hating Bevin,” Sabreen Hussain (10, HSU) said.

“Andy Beshear was able to really come out and take advantage of Bevin’s unpopularity,” Demos Negash (11, MST) said. Negash worked on Adam Edelen’s campaign leading up to the Democratic primary.

“This election proves that although Kentucky is a deep red state that still votes very conservatively, most people can still agree that a governor who does a bad job shouldn’t be governor,” said Brennan Eberwine (9, J+C)

“Matt Bevin” by Gage Skidmore is licensed under Creative Commons Attribution-ShareAlike 2.0 Generic (CC BY-SA 2.0). No changes were made to the image. Use of this photo does not indicate photographer endorsement of this article.