Manual students use their appearance as a form of expression 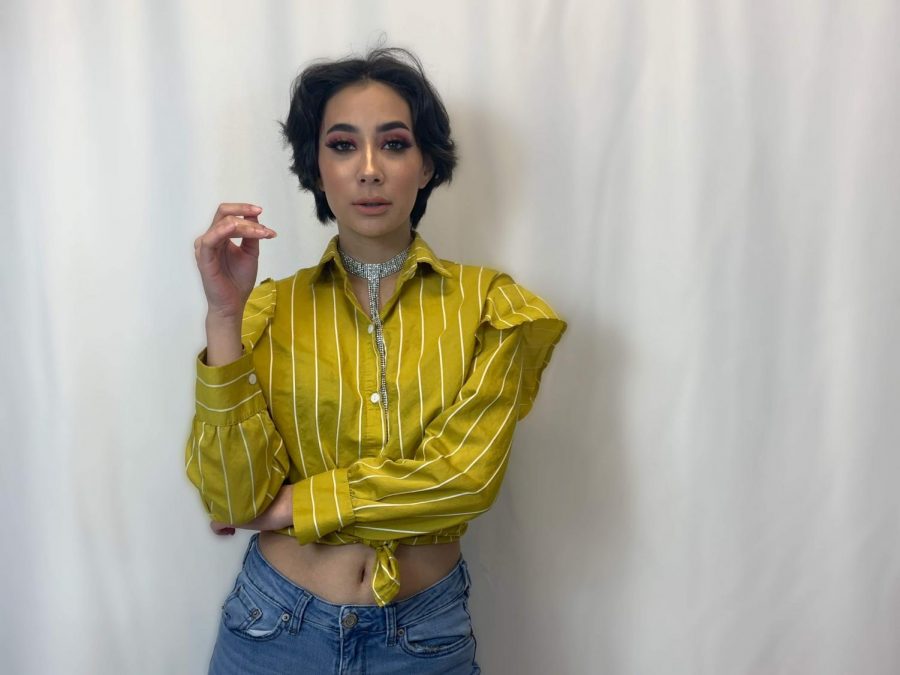 Khadijah Quinn (10, VA) not only uses makeup to express herself, but her clothing too. She pairs fun outfits with her exotic makeup to create her look and show others who she truly is.

Having such a loose dress code, Manual students are free to dress up their hair, makeup and clothing in almost anyway they would like. Some students use this advantage to express their personalities through hair dye, makeup and fun outfits. They dress in a way that shows who they are and what sets them apart from everyone around them.

“As an artist, I really like being unique and expressing myself through my art and adding my own touch to all of my clothes,” Anna Emberson  (10, VA) said.

Emberson adds her personality into her clothes by painting designs onto t-shirts, pants and shoes that she buys plain from a store. Since she does not want to do anything to permanently alter her look, Emberson chooses to express herself through artwork on clothing rather than hair dye or piercings.

While Emberson does paint some of her own artwork onto her clothes, she really enjoys painting other artists’ famous pieces to decorate her daily look.

Anna uses this form of expression as a way to feel more like herself and confident in who she is.

Another way Manual students express themselves is through their hair. Hayley Reed (10, VA) has been dyeing her hair ever since the sixth grade and loves the fun colored look. Although Reed now loves her hair, at first, it was not the easiest transition.

“I was the first one at my school to ever dye their hair,” Reed said.  “I did get made fun of…It was a little hard at first.”

Reed dyes her hair a variety colors, often having three or more colors in her hair at once. Being able to design and color her hair anyway she wants helps Reed to express herself and her personality.

“A lot of my self esteem comes from [my hair,]” she said.

Not only does she use her hair as a form of expression,  but also as a way to meet new people.

“It’s a good way to draw people close to me,” she explained.

With having such colorful hair, Reed is used to the attention it draws. She takes this as good attention.

“I’ve made a lot of friends who have come up to me just because they liked how my hair looked,” she said. While most people try to fit into a crowd, Reed uses her hair as a way to stand out. “It’s like sticking out as a sore thumb in a good way,” she explained.

Hair dye is not the only way Manual students stick out to their peers. Even though it can take her up to 45 minutes in the morning, Khadijah Quinn (10, VA) expresses her personality with the way she wears her makeup.

While most people think of makeup as a way to minimize the appearance of flaws on their face, Quinn does not see it in this way at all.

“It’s not something I use to cover up anything I’m insecure about, I use it to project who I am,” Quinn said.

Her journey with makeup started when she would play with it as a child. Once she started wearing makeup daily, she began to get better and better at the art.

“In middle school, I would wear heavy makeup and it would look so bad,” she said. “I finally started to get good at it last year.”

Quinn loves the person she is and uses makeup to further express that.

“I’m an outgoing person, and that projects in my clothes, too. I put them both together– makeup and clothes–and it shows who I am.”

Some people use a mix of hair dye, piercings and makeup as a way to express not only their personality, but gender identity, too.

“I identify as gender queer.” Reece Martin (10, YPAS) said. They have dyed their hair, pierced their ears, and they change their appearance with how they feel day-to-day.

“I wear earrings, and I wear makeup, and then I pair it with more masculine presenting clothes,” they said.

Martin has not always been so secure with their identity and their way to express themself.

“I realized I was non-binary in seventh grade,” they said.

Martin started wearing makeup in eighth grade, earrings in ninth and dyed their hair this year in tenth grade.

“Over the span of three years, I’ve figured it out,” Martin explained.

After piercing their ears, Martin felt more comfortable with their feminine side.

“Oh, I really just wanted that to happen,” Martin said. “It further enabled me to feel more feminine on my feminine feeling days.”

After Martin started wearing makeup and pierced their ears, they eventually made the final step with dying their hair.

“It was something that would help me further express my creativity physically,” they said.

While Martin wears makeup and has pierced ears, they wear more masculine clothes, creating a variety of style in their look.

“Being a mix makes me feel more like myself,” Martin said. “I like my appearance pretty much all the time now. Once I figured out the equation, I liked the answer I got.”

Manual students not only have a loose dress code to allow them to express themselves, but an environment safe to do so.

“The diversity of Manual and how everyone has their own way of expressing themselves makes the environment so amazing,” Quinn said. Her makeup is always complimented by other students along with her friends.

“Part of it is just me not caring what other people think,” Martin said. “Along with that, Manual’s students and staff are very accepting of the LGBT community,” they explained.

With the care and support of the Manual staff, students feel much more comfortable expressing who they are.

“I feel like I belong because not everyone is the same,” Quinn said.

It is this special environment Manual has that allows students like Quinn, Emberson, Martin and Reed to be celebrated, not judged.