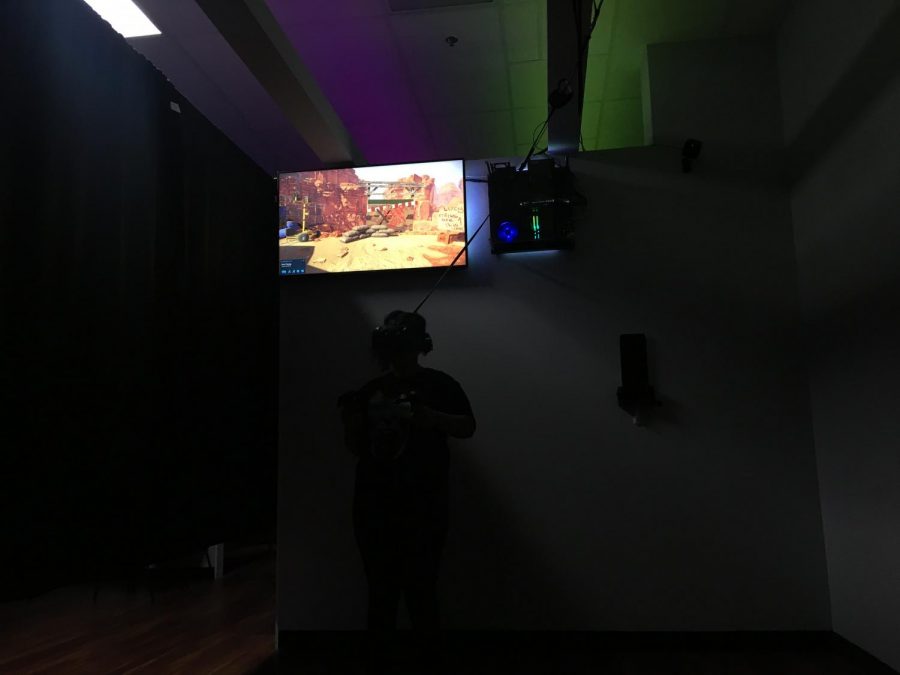 In New Albany, IN, nestled between a Five Guys’ and a Papa Murphy’s, there is a little place called Dimension 4 VR Arcade. Dimension 4 is the first VR arcade in the Kentuckiana area and has a great range of games to choose from.

VR refers to virtual reality, which is most often found in the form of VR headsets. VR as a medium thrives on making you feel like you’re really inside the game. The medium is getting more advanced, and more convincing. One employee said over 40 people had fallen by trying to lean on a digital counter that only existed in-game.

I decided to check out Dimension 4 with a companion recently. Their eight VR stations all consist of one HTC Vive headset, (pretty top of the line all things considered,) a monitor to see what the person in the headset is seeing and a play area with a mat in the center. Since the headsets are Vives, they require an external computer, which sits on a shelf next to the monitor. The headset cables are positioned along a track above the play area. Some also have couches for spectators to watch. The pricing ranges from $50 for two hours to $20 for 30 minutes of playtime.

One issue I ran into was a misunderstanding based on some dubious clarity on their website—no matter how many players you book for one station, there is only one VR headset per station. Some of their games are multiplayer, but simultaneous multiplayer will require multiple headsets, and thus multiple stations.

They have one special station specifically for Beat Saber, which can be best described as slicing boxes with lightsabers to make music. It had a green screen setup so spectators could see you on the monitors inside the in-game environment.
My experience
I played Arizona Sunshine, essentially the Walking Dead if you were alone in rural Arizona. I’d seen near full playthroughs of the game before, and it still managed to surprise me. After fifteen seconds in a main menu, and then thirty of calibration (which I failed so drastically that my ammo belt, which was supposed to be on the waist, was placed on my armpit level.) I was loaded in. The load times were tiny, almost negligible compared to what I expected, and so was the calibration time. I got into the game almost immediately.

The tutorial of the game was pretty comprehensive, and the staff were very helpful if you had any questions. The game was beautiful and terrifying at once. The majestic red rock canyons were astounding, but you were also kinda constantly paranoid at what they could be hiding. As far as the controls go, they were, (for the most part,) grand. I struggled to aim, but that’s because I can’t hold still. My friend was getting headshot after headshot from across a bridge with a pistol, so I assume it’s not the controls’ fault. My first moment of genuine terror came when I reached a door early in the game. Which one, I won’t say. No spoilers. As I walked up to the door, a zombie jumped onto it. In my mind, it went like this. “Whoa, he’s fast. But that door’s closed, it’ll be f-” and then the door fell down and the zombie sprinted straight at me from five feet away.

I’d like to say I executed him calmly, but truth be told, I shot off half a magazine and accidentally hit him in the face. I found a grenade in a car, (that I couldn’t figure out how to use,) almost killed myself by shooting it, and then almost killed myself by shooting myself in the jaw. The second moment of terror came at the end of a bridge. About 15-20 feet from the bridge’s end, I heard a growl which turned out to be a zombie leaped up onto the cop car in front of me. I took him down, but there were about 15 more. I panicked, and started missing even more shots than usual. I turned and ran when I ran out of ammo and tried to reload, but because of my weird ammo belt placement and my panic, it wouldn’t work.

In real life, I probably looked like I was trying and failing to pound my chest like a gorilla. I could only watch on as I was surrounded, desperately trying to do something, anything, but I was trapped. The last scare came in a small office. I opened a fridge to try and find the burgers that are a substitute for medicine and bandages in the game. I found a zombie slumped over inside and emptied the magazine just to make sure he wouldn’t get back up.

Based on personal experience, the headsets at Dimension 4 are VERY immersive. Several times I legitimately forgot I was in a game, and because it was so convincing it was also very capable of scaring my pants off because I decided to play an action-horror game. I did have some kinks- certain parts of the game weren’t intuitive like the grenades, and I had no idea why my ammo belt was broken until an employee told me- but overall, it was very fun and not too complicated to understand.
Final thoughts
After this, my friend got her go which led to the end of our time there. All in all, it was a blast. I’d strongly recommend Dimension 4 to anybody who’s looking to try out VR or even just for something to do over break. The experience had a few kinks, like my miscalibration of the ammo belt and the game lacking a grenade tutorial, but despite these, it was outstanding.

If Arizona Sunshine isn’t your cup of tea, they offer Beat Saber, Budget Cuts (a teleportational stealth game), Job Simulator (a funny job-based game with robots), Superhot (where you’re basically John Wick with the ability to slow time),  escape rooms and more. It’s got something for almost anyone and I encourage you to give it a try.